Which solar power technology has the highest energy return on investment (EROI aka EROEI)?

Which solar-electric technology had the highest EROEI?

Energy Returned On (Energy) Invested, also known as EROI and as EROEI, has become something of a fashionable metric *but see footnote.

Within scope for this question:

are all in scope, along with anything I haven't heard of that converts sunlight into electricity, without going through convolutions such as biomass, wind or wave. 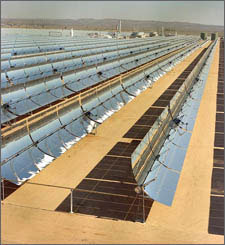 Attempts at doing it purely through prices do not answer the question: price is emphatically not a useful measure of total energy input, because the factors of production (land, capital, enterprise, labour) are not zero-cost, and because the ratio of energy to other inputs varies hugely by manufacturing technique and by product. So that approach is explicitly out of scope, because it's just plain wrong.

Also out of scope:

* footnote on EROEI: Whether or not EROEI has much significance is disputed:

TLDR; cadmium telluride panels have the highest EROI of the mentioned PV panels (around 34.2)

EROI estimates vary widely. This is because of differences in the method of calculation, scope of the study, installation location, assumed lifespan of a panel, etc. This also makes it relatively easy to manipulate EROI calculations.

The most pessimistic estimate I've read is this article where the (apparently pro-nuclear energy) author claims that solar PV has an EROI of 3.9 (in Germany) and 1.6 when you buffer excess energy. He also says solar CSP in a desert has an EROI of 19 (and 9 with buffer). I found the original article on which these numbers are based. To be more precise in that article they've calculated the following numbers:

In contrast, in this optimistic paper written by a director of a PV research center they've calculated the following:

Truth is the middle?

I'm not sure how reliable any of the mentioned numbers are. The truth probably lies somewhere in the middle. This seems to be confirmed by the results of this 2015 meta study where they reviewed 232 studies published between 2000 and 2013. 23 studies that met their criteria were analyzed further (11 on mono-Si, 11 on poly-Si, 7 on amorphous Si, 11 on CdTe and 8 on CIGS). The conclusion was that the mean harmonized EROI varied from 8.7 for mono-crystalline silicon panels to 34 for cadmium telluride panels (see also the picture below). Sadly they didn't investigate CSP or CPV. 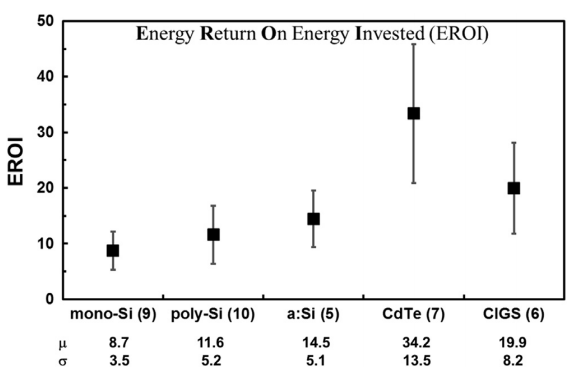 http://www.ce.cmu.edu/~gdrg/readings/2005/12/07/Williams_EnergyChemicalUse.pdf following the above link you will find there on page 2(185):"According the 1997 National Technology Roadmap for Semiconductors, average electricity consumption was 1.4 kWh per square centimeter of silicon wafer processed". I do not think figures are much lower now. Besides, they are do not include assembly, transportation and buffer. If there was EROI=1 it would be a magic.

Solar EROI is far below 1. The above-one EROI estimates are due to various shenanigans, such as excluding infrastructure costs.. 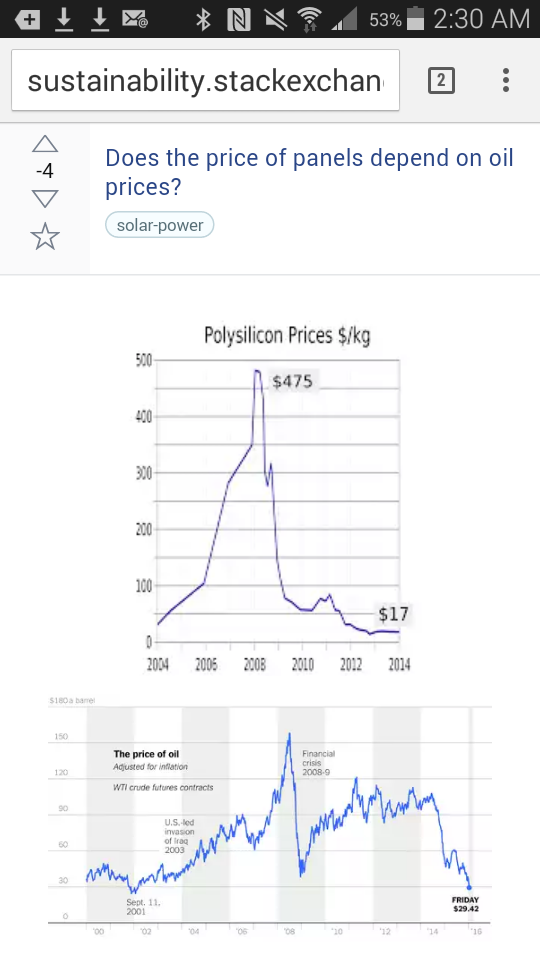 The comments below also ignore infrastructure costs and use industry-reported data despite obvious conflicts of interest.

Not the answer you're looking for? Browse other questions tagged energy electricity solar-power life-cycle-analysis photovoltaics or ask your own question.

8
Is the energy used to manufacture and install solar panels in proper balance with the energy output from them?
1
Does a PV panel take more energy to build than it generates in its lifetime?
1
What is the economic sustainability of solar power
4
Does the price of polysilicon (for solar PV panels) depend on oil prices?
5
What is investment/outcome ratio for wind energy in terms of energy (EROEI)?
5
What are the Energy Return on Investment (EROI) values like for biogas?

29
Estimating the cost of solar panels and return time?
5
Which battery is best for solar power?
9
Establishing a Small Commercial Solar Plant
6
Can 140 square miles of solar panels power the US?
5
How much irradiation from the sun is required to generate solar power?
2
Low-cost solar energy alternatives to power a single appliance in an apartment?
5
What are the Energy Return on Investment (EROI) values like for biogas?
4
Which measure of solar irradiance is needed to calculate the energy output of PV systems?
1
What is the typical embodied energy of a solar photovoltaic panel?
4
What is the energy payback time of portable solar panels, in hours?