How much weight would a wireless charging system add to an electric bus?

Wireless charging requires a number of 'receiving charging pad's and a 'management module' and I imagine there will be additional wiring. How much extra weight does this add to an electric bus?

TL;DR: On-board components of wireless charging are actually 342 kg lighter than for the on-board components of plug-in charging, and allows the total battery size to be reduced (given ability to charge more frequently), allowing a battery mass reduction of 56 to 73% (1,979 to 2,577 kg).

"Plug-in vs. wireless charging: Life cycle energy and greenhouse gas emissions for an electric bus system" provides a full inventory of the mass of the various components required for bus wireless charging (a pdf of the masters thesis the article is based on has more detail and is available here).

The on-board components of a 60 kW battery charger are in the table below, comparing wireless charging to on-board plug in charging.

The diagram below shows which components are on- or off-board for plug-in and wireless charging. Gray components are unique to each type, and dotted line shows the vehicle boundary. 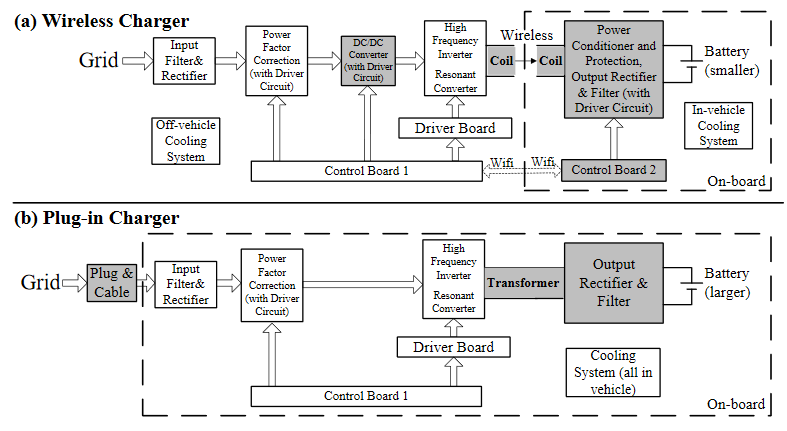 There are some differences in which components are needed, but wireless charging allows for less of them to be on-board, so actually ends up being lighter: The on-vehicle weight for wireless charging is actually 342 kg lighter (5.7 kg/kW) than for a plug-in electric bus with on-board charging.

In addition to the on-vehicle charging system being lighter for a wireless charging bus, the total capacity (and thus mass) of the battery can be reduced without sacrificing range, since the bus can charge more often. As the battery mass is reduced, bus efficiency improves, allowing a secondary reduction in battery capacity while still maintaining the same range -- for every 10% decrease in bus mass, the energy demand is reduced by 4.5%.

Depending on the route, the mass of the battery pack can be reduced by anywhere from 56 to 73% (1,979 to 2,577 kg). This assumes stops of 30 seconds at normal bus stops, and 6 minutes at transfer points, for a total charging time of about 25% of the time the bus is active on a route. 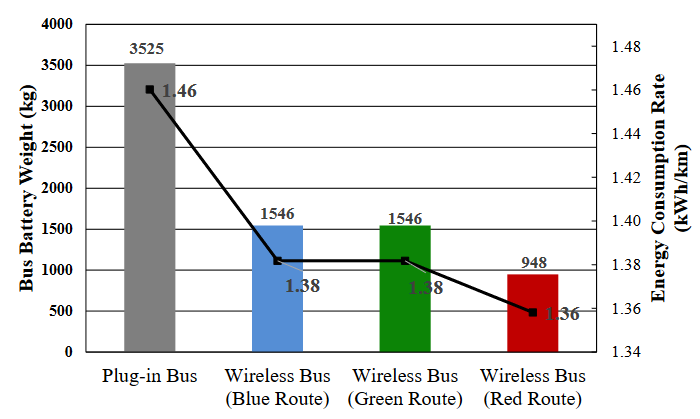 A number of other researchers have also looked at the question of how wireless charging can allow battery capacity to be reduced, including such factors as the number of buses along a route (which influences how long they remain in one place), and the use of charging tracks (allowing wireless charging while entering and leaving a bus stop, in addition to while picking up passengers). The range of estimates for battery lightweighting match the range in the study cited above:

A couple of hundred pounds. But it's meaningless.

Whether you charge a battery by wire or wirelessly matters not, it still needs the battery. An EV future is an environmental nightmare, basically it means a 2000 percent increase in overall mining for all the critical resources needed to make them. People just dont understand Energy physics, a gallon of gasoline weighs 6.3 pounds and can propel your four cylinder car 30-40 miles, a Tesla battery stores 100 kilowatt-hours on a 1200 pound battery; or 12 pounds per kw-h and can only propel it 3 miles per kw-h.

A trolleybus on the other hand does not need a battery. In this way, it bypasses the inferiority of electric cars, namely the battery charge time and the enormous environmental profile of making the battery. 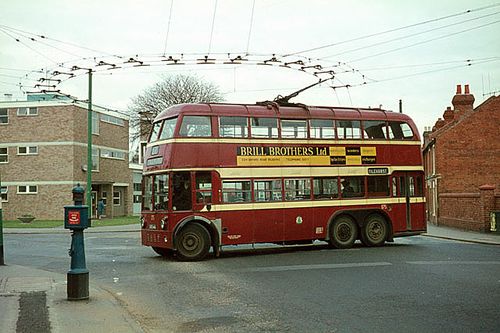 Unlike a train or a tram, a trolleybus does not need set up rail infrastructure or tearing up streets to make tracks. This not only results in huge cost and time savings, it saves a large amounts of energy in construction. Granted trolleybuses cant go everywhere but with no need for rail and city grid streets they can accomodate a multitude of locations. Quito, Ecuador has a trolleybus system, During peak hours, there is a bus every 50 to 90 seconds (because of it's overall high frequency, there are no schedules). El Trole as it’s called transports over 200,000 passengers each day. The total capital invested for the 19 kilometers of line was less than 60 million dollars; for a comprehensive system that moves nearly a quarter million people a day. Electric buses are nearly as expensive, but their ranges are poor, a charging system doesn't matter if it takes 3-6 hours or a range of less than 200 miles. Diesel buses can go 300-400 miles.

Not the answer you're looking for? Browse other questions tagged transport electric-vehicles or ask your own question.

2
5 Questions to indicate carbon impact
15
Most environmentally friendly mode of transport
2
Electric cars and grid power capacity
3
Does Start / Stop technology in cars have an impact on air quality and by how much?
5
How to design a taxi rank to charge electric vehicles whilst waiting for fares?
5
Is charging Tesla Model 3 at 110v/15amp less energy efficient than at 220v/30amp?
8
How much of a reduction of carbon emissions can be achieved if a diesel bus is switched out for electric?
7
How much CO2 does a plane produce per additional kg of weight?
3
Is it more ecological to take a diesel ferry or drive an EV the longer route?