The toilet rust is a very tough stain. I have tried:

I am asking for other options that are biodegradable. Please let me know the products, and homemade recipes you have.

How are you applying the cleaning solutions? The technique is just as important as the ingredients - they need time to work, which may be difficult with a porcelain toilet bowl, as the dimensions and pool of water can interfere with the process.

You need the solution to remain on the affected area and not be diluted by the bowl of water - draining the latter as much as possible before application would be the best option.

According to this article, Vinegar and Baking Soda paste should be left on the affected area for at least an hour, followed up with a second paste of Cream of Tartar (a.k.a. Potassium bitartrate) and 3% Hydrogen Peroxide, also for an hour.

As for the eco-friendliness of these ingredients: Cream of Tartar is a byproduct of the winemaking industry and is used in cooking. Hydrogen Peroxide is considered greener than chloride-based bleaches, and produces water as a byproduct. Some businesses are making the switch to Hydrogen Peroxide over chloride-based bleaches, for example, Barnhardt Cotton

It sounds like you just need to add a pumice stone to scrub the rust stains off. I use the one with a handle attached it is about $8 and will last for years. Search the Internet for “pumice stone toilet”. 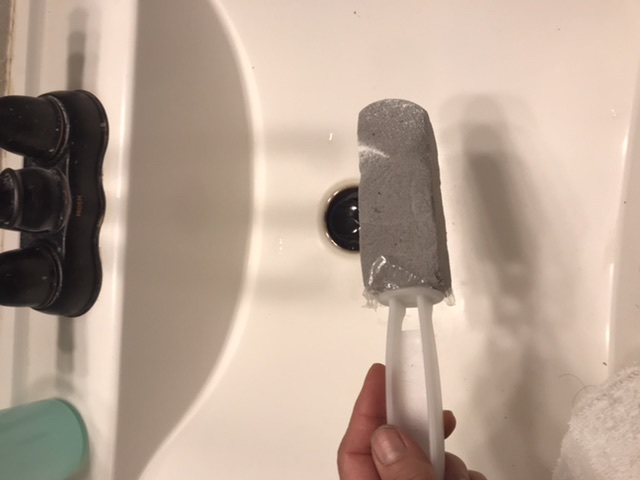 Try the following: Buy some all-in-one eco dishwasher tablets. Put one directly into the toilet bowl where the lime is jammed and leave it there over night (it will dissolve in the little amount of water there). In the morning just flush and the bowl should be cleaned from any lime etc. Maybe you need to do this more than one time, but it should work pretty easy and fine.

Coca cola. The acidity in Coke makes it super handy for cleaning purposes.

Not the answer you're looking for? Browse other questions tagged cleaning toilet ecolabel or ask your own question.

6
What harmful products are used in shampoo, conditioner and body wash that I should avoid?