Does a building need an equator-facing roof to take advantage of Solar PV systems?

Does it need an equator-facing roof? No.

Does it help to face the equator? Yes, but probably not as much as most people might think.

Solar panels are surprisingly productive, even if they're not oriented optimally. If your primary goal in installing home solar is a desire to produce renewable energy (for environmental reasons), almost any roof will do, as long as it's not shaded by other buildings or trees. If your goal in installing home solar is purely to save money, then you may care more about the modest losses from suboptimally-oriented panels.

Let's look at a typical plot of solar panel output, as a function of roof orientation (e.g. relative to the equator), and panel tilt (relative to horizontal): 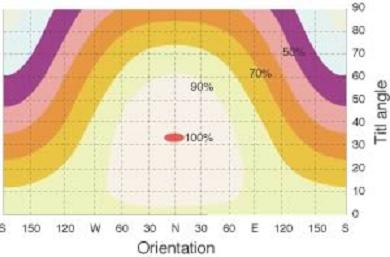 Let's say your panels are tilted 32° from horizontal. The graph shows that you get 100% of the maximum energy production if you point the panels North (this is an Australian chart). But, if you point the panels Northeast or Northwest, at the same tilt angle, you're still easily within the white area indicating 90+% of the maximum energy production of your panels! And even pointing due East or West, the worst possible orientation (‡), you're still producing about 85% of the maximum. That's only a 15% loss, with a "bad" roof orientation!

Here's a table showing similar relative calculations at a variety of Latitudes.

If you really want to get the precise number for your location on Earth, check out the US NREL's PVWatt tool.

Doing this, you can compare the results for the direction (azimuth) your roof points, with the optimum (180° for Northern hemisphere, and 0° for Southern). That will show more precisely how much roof orientation matters.

As I said, it's not that much.

You can perform the same comparison with Array Tilt.

(‡) Technically, East - West is not the worst roof face to pick. You could, for example, pick a North-facing roof in the Northern hemisphere. My friends in California claim that this is somewhat common, as some people will choose to place their solar panels on the side of the roof that faces the street, so they can show off their green-ness, rather than the side of the roof that's most efficient

2
Building permits for solar in the USA
17
Should solar panels be installed before or after re-shingling the roof?
10
How worthwhile is it to use energy during daylight to take advantage of grid-based solar power?
6
How large a solar panel would I need to electrolyse 1 liter of water?
10
How can I cheaply evaluate how much solar energy I can collect?
4
Which measure of solar irradiance is needed to calculate the energy output of PV systems?
3
PV system: Which to upgrade first: panels, inverter, batteries?
2
How to work around a supposed Huawei SUN2000L-5KTL inverter throttling issue