Which countries, regions, or cities have banned natural gas in new construction?

Last week, the city of Denver, U.S.A. announced a proposal to ban all new natural gas connections by 2030. From The Denverite:

Changes to natural gas rules will come via revisions to Denver’s building code, the rulebook for new construction. The Denver City Council will have to sign off on the revisions. The city is focused primarily on rolling back the prominence of gas-fired heat and, to a lesser extent, gas used for cooking, said Amber Wood, the lead author of the plan.

From the press release that accompanied the plan:

This move follows a similar plan announced by the U.S. state of California.

Which other countries, regions, or cities currently have requirements or targets to eliminate or reduce new natural gas connections? What are the specifics of the plans?

In the Netherlands gas boilers have been banned in new construction since 2018.

In the UK and Austria gas boilers will be banned in new construction from 2025.

In the United States

Many cities in the U.S. state of California

The Sierra Club has a list of 42 cities in California that have implemented some form of ban on natural gas in new construction. The list includes a brief snippet about the specifics of the rules, and links to the relevant legislation.

They provide this chart showing the impact of these mandates across the state's population: 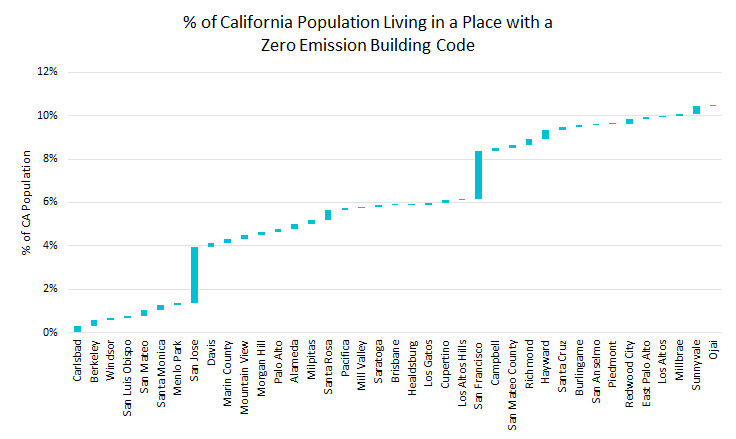 Here are a few examples:

Denver, Colorado (as mentioned in the question)

In February, 2021, the Seattle City Council approved an update to the energy code that will limit how natural gas can be used in new buildings and when retrofitting existing buildings. From The Seattle Times:

The Seattle City Council on Monday unanimously approved changes to energy codes that will further clamp down on natural gas use in new commercial and apartment buildings taller than three stories.

The ordinance bans natural gas for space heating in new construction of these buildings, or for use in replacement heating systems in older buildings. It also would prohibit the use of natural gas to heat water in new hotels and large apartment buildings, and take other steps to improve energy conservation that include a greater use of more efficient electric heating and cooling systems.

Almost certainly Aotearoa will phase in a ban from 2025. Currently a draft plan but likely to go ahead: https://www.stuff.co.nz/business/green-business/124127933/choosing-gas-for-new-homes-could-be-money-down-the-drain-says-consumer-nz

Not the answer you're looking for? Browse other questions tagged greenhouse-gas-emissions construction natural-gas law or ask your own question.

5
Which energy sources will replace fossil fuels for heating homes in cold climates?

7
What countries have the highest greywater reuse rates?
11
How is Natural Gas more sustainable as fuel than Gasoline?
4
Will natural gas or propane generators also run off of methane?
3
Life cycle analysis comparing natural gas and propane prior to combustion?
4
Are oil and natural gas inherently linked?
2
How much does the methane content of natural gas vary, and what is the impact?
4
Which countries, regions, or cities have set a date to ban the sale of gasoline and diesel vehicles?
4
Propane vs. natural gas stove - indoor air quality?
3
Is the natural gas sold to other countries by Russia produced in a more environmentally detrimental way than the natural gas sold by the US? How? Why?