I spent 2 weeks traveling on my bicycle, and usually I was very hungry.. Since I ate a lot of food, I asked to myself if maybe a train (dividing cost between all passenger) was more green than me!

I imagine that, as for steam/electric trains, there will be strong dependence upon my diet. Comparison about human energy efficiency probably depends also upon kind of activity done (walk, run, ride a bike) The matter seems a discouraging one, specially for a non-scientist person like me.

Is there some bibliography or other reference to this topic?

Human is quite an energy-efficient, kinda.

if I remember correctly - pro bicycle riding on a closed track exercise about 0.5kwatt for about an hour - those are pro guys (there was some video on youtube about that) and not pro guys they will have a hard time being even close to that. if one is just in a good shape it is not enough.

the electric car spends about 0.125-0.250kwatt hour per km, trains will probably be close to those numbers as well.

so u may spend 0.01kwatt hour per km or probably less, with a bicycle, and be 10 times more efficient.

in general average human power with all inefficiencies and all that is around 0.150kwatt (3000kcal day, hungry adult doing a physical thing)

Do not forget that you are a part of the carbon cycle - food-co2-plants-food - so the energy u use, as a human body, is renewable. There are nuances that food is grown processed and additional energy spend on it, so there is some energy on all that on top of it, some of which is not renewable.

However there is another angle on the problem - train exists already and riding it you make the train less inefficient. And do we need trains and railroads? - yes, so they won't go away no matter do u use them or not, so using them is also a way to make them making more for the same energy spent aka more efficient.

okay, decided to check myself a little and there is an interesting wiki table: Energy Efficiency and Consumption of Land Passenger Transport means

So that are cases when train more efficient than walking or bicycle, which is kinda surprising for me, not sure if they mean those 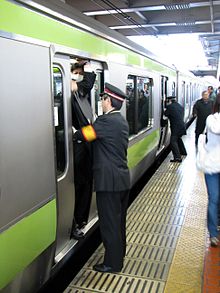 or something which involves less squeezing.

Since I ate a lot of food, I asked to myself if maybe a train (dividing cost between all passenger) was more green than me!

A train typically uses electricity. The emissions of electricity on the greenest grids are typically around 50 g / kWh produced. In the near future I think we can even reach zero with hydrogen energy storage and renewables.

A human is a thermal engine with 25% efficiency. So a human needs 30 watt-hours per kilometer of food energy. This is 25.8 kcal, or 7.6 grams of pasta per kilometer.

Creating a kilogram of pasta produces 1.3 kilograms of fossil CO2 (plus the non-fossil CO2 that isn't counted because the plant has sequestered it from the atmosphre). So traveling on a bicycle at the minimum produces 10 grams of CO2 per kilometer. Of course a human could have a more varied diet.

A train today consumes 16 watt-hours per kilometer per passenger. So a train already today requires less primary energy than a bicyclist. On the greenest grids today, a train thus produces around 0.8 g / passenger-kilometer.

Of course on the dirtiest grids you can multiply all amounts by 20. So an electric car would be 180 g / km and a train would be 16 g / passenger-km. So in a really dirty grid a train would produce more CO2 than a bicyclist on a really green diet. However, most cyclists don't eat only pasta but eat a small portion of meat as well, so we can safely conclude that in 99.9% of cases a train is more green than a cyclist.

Electric bicycles with current regulations won't help much by the way. On an electric bike, over half of the energy comes from the human cyclist due to the 25 km/h requirement, and only less than half from the electricity. This is because a typical cyclist on flat ground is already traveling at more than 25 km/h. To make electric bikes truly green, the 25 km/h requirement at which the electric assist needs to be cut off has to go away.

Over moderate distance. Man on a bicycle can go three or four times faster than the pedestrian, but uses five times less energy in the process. An 80 Kilogram human being carries his weight one kilometer of flat road at an expense of only 56 calories; walking 1 kilometer will burn 76 calories (234 joules)

Not the answer you're looking for? Browse other questions tagged energy-efficiency food human-factors or ask your own question.

5
What is investment/outcome ratio for wind energy in terms of energy (EROEI)?
6
What's the most energy-efficient temperature to use when cooking?
8
Most fuel efficient way to run AC in my car?
5
Is the production of hydrogen fuel more efficient than storing the excess solar energy in a battery?
5
Which is more energy efficient, a washing machine express wash, or normal?
5
Energy requirements for sustainable food production system
7
Which is more energy efficient? Heating ten 1L water separately or one 10L water directly
4
How much energy am I harvesting?
2
What is the most efficient setting on my oil-filled radiator?
2
Most energy-efficient way to keep my pipes from freezing without tearing up walls/floor?