Why don't they make playgrounds generate electricity (at least, not on a large scale)? It's a pity that all that energy of children horsing around goes to waste instead of being harnessed. You could incorporate a generator into a swing, for example.

Because a playground equipped with generators would probably not be much fun.

Even if children could be convinced to exploit themselves for child labour, there is still the problem that all of their rambunctious energy originates as food energy. Food is not free to purchase, nor is it free to produce, so any kind of power generation based on food and human kinetics tends to have poor economics.

But since we're here, let's think about how much energy could potentially be captured.

A child age 8 expends about 1000 kcal/day as the basal metabolic rate (BMR). A very active person (such as a playful child) might have a physical activity level (PAL) around 2.0, which means that 1000 kcal/day are available to perform mechanical work. The human body is about 25% efficient at converting food energy into mechanical work. Turbine generators are around 80% efficient.

Therefore, one playful child could produce about 200 kcal (2.3 kWh) of usable mechanical energy each day. Where I live, that's about $0.14 worth of electricity. This clearly won't be a good investment.

A better target would be gym exercise machines

Playground equipment is very expensive and not typically something that local councils have large budgets for. Hooking it up to the electrical grid for minor amounts of electricity generation would increase the cost substantially and require an ongoing electrical maintenance contract.

There are two main areas to consider here:

You could put a rugged bicycles as "charge your phone" stations novelty, but don't expect any huge output.

They do.) Just to show how small power such generator can produce.

In the picture bicycle generators that convert mechanical power into different types of power are shown, they're located near Municipality of Jerusalem. 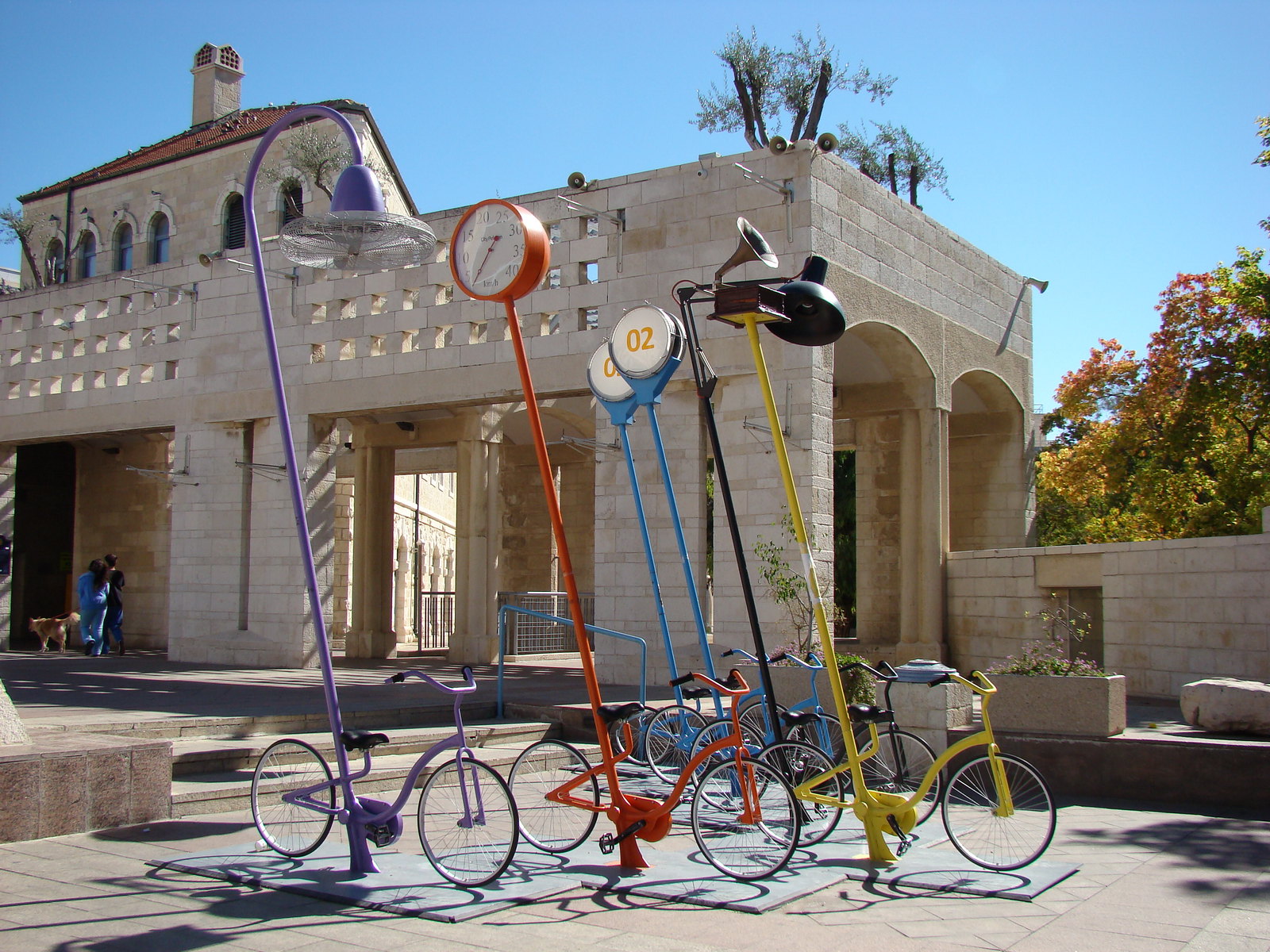 My brother is a bicycle fanatic, a former engineer, and a current nurse. According to his calculations ... Lance Armstrong (with some chemical enhancement) is likely the single greatest generator of electricity in the human race. According to brother's calculations ... Lance could roughly keep a 60 to 75 watt bulb (incandescent, better with LED) going during his maximum cycles. Realizing the best kids are going to be about half of that ... this is something only government would invest in ... because the costs would be 100x or more over the benefit. Even in a gym's spin class (far better source than a playground) ... you might only spend 20x as much as the benefit you would get.

The power produced would be so small scale and have so poor capacity factor that it isn't worth the effort.

Firstly, you need investments. You can't make power without equipment. You need a generator. A wind turbine for example has a generator that makes power at 30% capacity factor.

A playground? If we assume it's used 5 hours per day (and produces always power at the same rate), that's only about 20% capacity factor, worse than wind turbines. So your power production scheme can't really compete with wind turbines but requires the same investment for generators that run at a very poor capacity factor.

Also children aren't machines that produce power at exactly the same rate. I suppose the power produced would fluctuate a lot and to allow generating power during the peaks at peak power, you need excess capacity. So the 20% capacity factor at non-fluctuating power output actually turns into something like 10% capacity factor. That's worse than solar power.

7
What method is best to gather energy?
7
What scope is there for price reductions in photovoltaic inverter costs?
20
How much power can a bicycle generator produce?
3
Is 3 phase electrical generation more efficient to utilize than single phase?
5
Energy storage idea: Pumped hydroelectric storage in ocean using difference in salt content
4
Will natural gas or propane generators also run off of methane?
0
A hydropower based power-generating fitness system and some questions
2
Will there be a role for combined heat and power in an all-electric future?
1
Could multiple ram pumps be used to fill a watertower for a pico hydroelectric system?
1
What is the difference between energy-from-waste (EFW) and cogeneration?