For electricity use, which is better: Turning all appliances on at the same time, or spread out?

In the 1980's, a company I worked at owned a stand-alone building, and they were concerned about their electricity bill. It seemed to be higher than it should be. A manager called the electrical utility, and they said that the problem was turning everything on at the same time in the morning. That that surge of electrical usage all at once caused their electrical bill to spike, and instead they should try and turn only 1-2 things on within each 15 minute period. The company made that change, and their electrical bill was reduced.

Is that a thing still today? Is it better (at home, and/or at work) to try and spread out the process of turning many appliances/lights/computers on at the start of the day - either to save money and/or to be a better energy consumer? Or doesn't that matter actually?

The "surge" that the electric utility was referring to is the demand charge:

The kWh charge (consumption) is the measurement of the amount of energy the building uses over the given period of time. The kW charge (demand) represents the amount of energy consumed at a single point in time. An intuitive way to visualize this is through the car speedometer/odometer metaphor. The rate at which you are using electricity (kW) is comparable to the speed you are driving the car (speedometer). Your actual consumption (kWh) is similar to the total distance in miles that is driven by the car over a given time period (odometer).

In the U.S. most utilities use a rolling 15 minute demand window. The meter averages the demand within each 15 minute chunk of time, and the chunk with the highest average is used to calculate the demand charge. The demand, time, and day all factor in to the amount of the bill.

The day and time matters because the cost of generating and delivering electricity changes. Continuing with the car analogy, certain days and times are like rush hour traffic -- when everyone is trying to use power. The transmission and distribution system (the wires that carry electricity) have physical limits, like lanes of a highway. Demand charges create an incentive for power users to shift the days and times when they use power. Most businesses tend to open around the same time, which is why your employer had a high demand charge. Waiting 15 minutes lowered the average and reduced those charges. 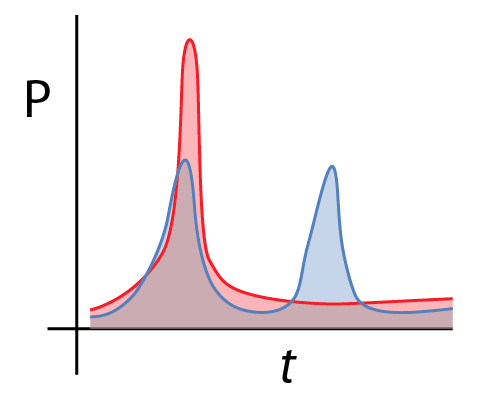 Let's assume the area under the two curves (energy, in kWh) is the same. But the red curve (turning all appliances on at the same time) has one big spike in power demand (kW). The blue curve (spacing out when you turn appliances on) has two smaller demand spikes. Since you're only billed based on the single largest spike in the month, the demand charge for the second case will be half of the first case.

Demand charges are still in use today and have mostly increased. Looking at your profile, I see that you're in the Twin Cities, Minnesota, where your utility is likely Xcel. Xcel publishes rate cards which give an overview of the different rates available for homes and businesses. As is typical across the U.S., there is no demand charge for homes.

For businesses, the per kW demand charge is $14.79 in the summer, and $10.79 the rest of the year. There are optional time-of-day rates that limit this demand charge to weekdays between 9am and 9pm, with other charges that apply to peaks at night and on weekends.

The primary issue being described is Peak Demand charge. The description in LShaver's answer explains a lot of that, but there are a few more pieces that I think are important:

The transmission/distribution system needs to be able to handle peak demand at each level (transmission lines, substations, neighborhood distribution lines, etc.). Except for major industrial customers though, this really isn't much of an issue. However, for the actual generation of electricity it is a big issue. Unlike water (think "water towers"), electricity doesn't have any storage within the system (generally, more below) and most electricity sources can't spin up/down very quickly. Coal and oil plants take a long time to add capacity. Solar and wind are mostly beyond human control (in the case of solar, at least the peak solar generation generally corresponds to peak usage - middle of the day). Natural gas is the typical "peak capacity plant", but even that takes some time to start up. Nuclear is the ultimate - very slow to start up or shut down, except emergency shutdowns, of course - you can't turn on another reactor for peak power in the middle of each day.

So what happens if there is not enough power? Voltage drops. In a small range that is not a problem at all. If it drops too much, that's a brownout. If it drops way too much, the system crashes, which is a blackout. Frequency (50 or 60 Hz) can also be affected, as well as other problems.

There is one power source that can add more power to the electric grid super fast: Batteries. Tesla did this with the Hornsdale Power Reserve. This doesn't entirely eliminate the peak demand issue, but it does allow for a more reliable electricity grid that can handle changes in demand better.

The end result though is that utilities need to handle peak demand (kW) needs in different ways from the overall production (kWh).

In addition to peak demand, which is typically a single value per month, based on the top 15-minute or 30-minute usage, general usage charges are often based on time of day and/or day of the week. Typically 2 or 3 different rates. This can be very effective in pushing commercial and industrial customers to move usage to off-peak hours. In places where this is also applied to residential customers (many utilities don't - depends on utility, meter technology and governmental regulations), it makes sense to run electric dryer, dishwasher, etc. in the middle of the night.

The company was having problems with demand pricing as discussed in other answers. That's not a problem for residences (usually).

At a "micro" level on the grid, it doesn't matter.

You dancing through your house throwing all your loads on at 8:16 isn't going to make a difference to the generator, because your tiny peak will "disappear in the noise" (average out) amongst thousands of houses being served by that distribution equipment and generators.

At a "macro" level, it matters a lot.

For instance most grids have times of day/year which are peaks for them. An example is 4 pm on a hot summer day - shopping is open and doing business (unlike 7am), industries are still running full tilt (unlike 7pm) and residential A/C load is coming on strong, as kids get home from school and smart thermostats spin up the A/C in preparation for adults to come home from work.

Peaks are tough. This is when "peaker" generators must be brought online that are only used for a few hours, a few dozen days per year. Yet the bank wants the mortgage paid all year. That makes these generators expensive - and usually they are natural gas, so not all that green.

The typical peaker used to be a locomotive diesel engine... but today it's a jet engine - like those in the A330 or 777 airliner, but the "fan" on the front is replaced with a generator. Great, you're paying mortgage on a jet engine you use 3% of the time.

... And that's why they're so keen to have EVs and PowerWalls back-feed the grid during peak times. People don't like this being mandatory, but no worries - as you plainly see, there's plenty of money "on the table" to incentivize willing participants.

Anything you can do to avoid power use during these times helps reduce demand for peaking generators and their fuel consumption.

Flattening your peaks works well for everyone

Here's what one really smart guy does with a well-insulated house.

TLDW: runs the air conditioner in the middle of the night, chilling the house to 66F. Then does not run at all through the day. Due to shading and good insulation, it never gets above 75F. This "battery" stores about 16 KWH, larger than a Tesla PowerWall.

But a far more radical way to do this works with extreme rate plans such as Duke Energy, which charges a peaking charge of $8 per kilowatt, but a 1 cent per kilowatt-hour rate. This favors great care so that your load never exceeds your baseline load (say 500W) plus one largest appliance (e.g. dryer at 5500W). Total 6000W ($48/month). Other than that, you are paying a penny a kilowatt-hour! 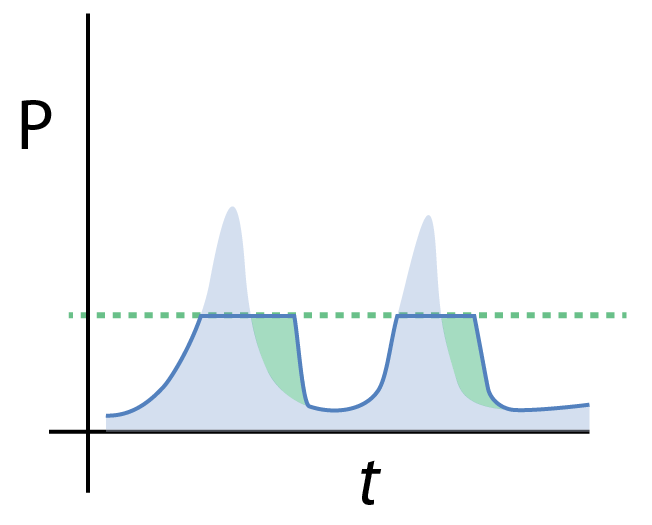 And another layer can be added to this. Those white areas below the green "6000W" line is power that would only cost you 1 cent per KWH under Duke's plan. The profitability of Bitcoin mining is tied to the cost of electricity. So you have a rack of Bitcoin miners that throttle up and down to "backfill" all usage below your 6000W. 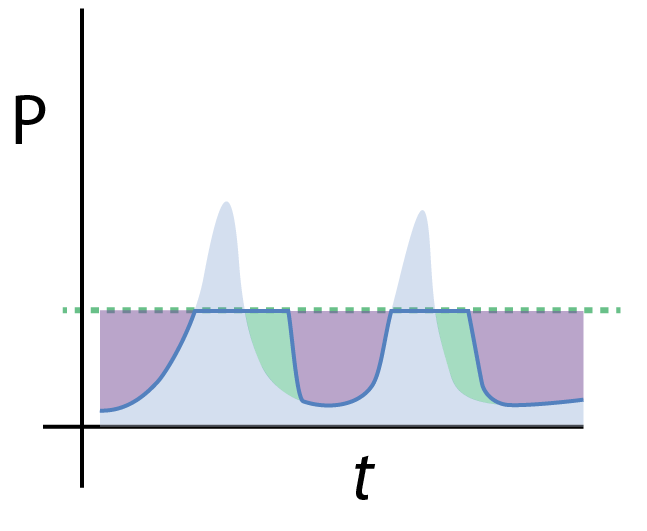 In an area which is overstocked on baseline 24x7 nuclear or "run of river" hydro (which can't be stored), you become the perfect customer.

Now how does this Duke plan handle summer peaking loads? They have certain hours during the summer where they suspend "penny a KWH" and charge much higher KWH rates. During those times, curtail usage.

Theoretically, if the charge is big enough for the electrical wiring the heat can also be a concern. When everything turns on together a high current can make the cables hot and that increases its resistance, making it consume more energy. But this increase is usually insignificant, especially if the wiring is dimensioned properly.

It is difficult to think it makes a difference in consumption. It is not unusual for us to have power outages. I normally go around and shut off the large users: AC, refrigerator, etc. But

I also have about 1000 watts of aquarium heaters. If the power is off long enough for them to cool, they also all come on at one time. I have not noticed any particular influence on consumption.

Not the answer you're looking for? Browse other questions tagged electricity energy-use or ask your own question.

34
What’s the best strategy for turning off CFLs that will save energy but not reduce lifespan so much
25
What form of electrical lighting has the smallest energy-footprint?
4
I'm in England, and want to move to a time-of-use electricity tariff, how do I get an appropriate meter fitted?
7
How efficient is it to use an electric car as storage for the energetic overload generated during sun hours (peaks) by solar panels?
7
Have spray-on solar cells hit the market yet? What other lightweight cell can I use for unusual shapes?
2
How to identify the rating of my electrical panel