Do solar panels generate more electricity in hot or cold climate? Who is right (sorry for the messiness, I currently don't know how to take a long screenshot)? 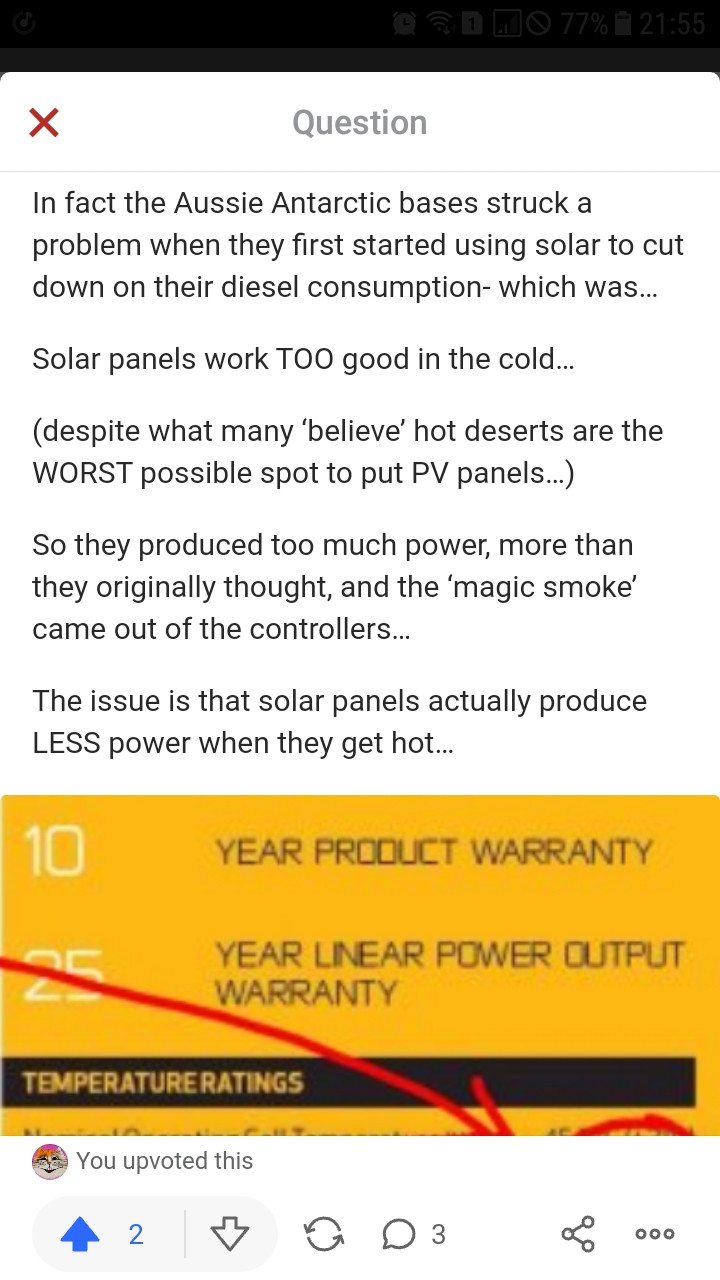 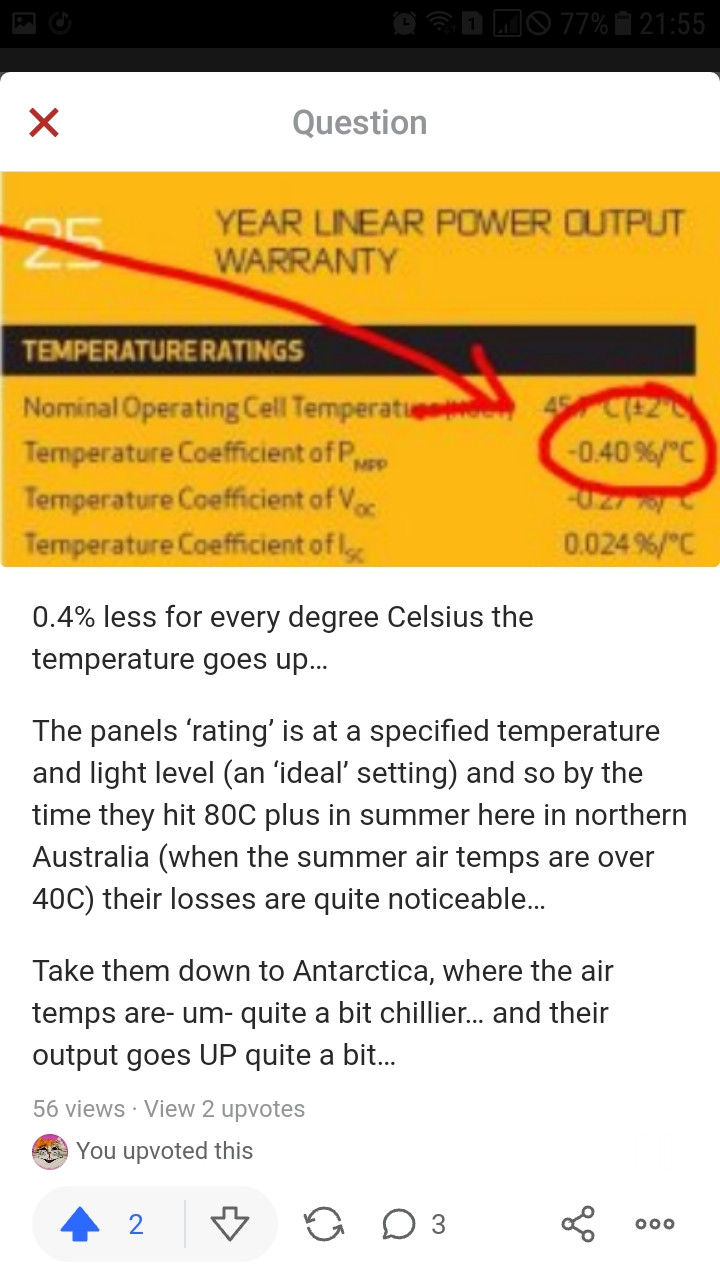 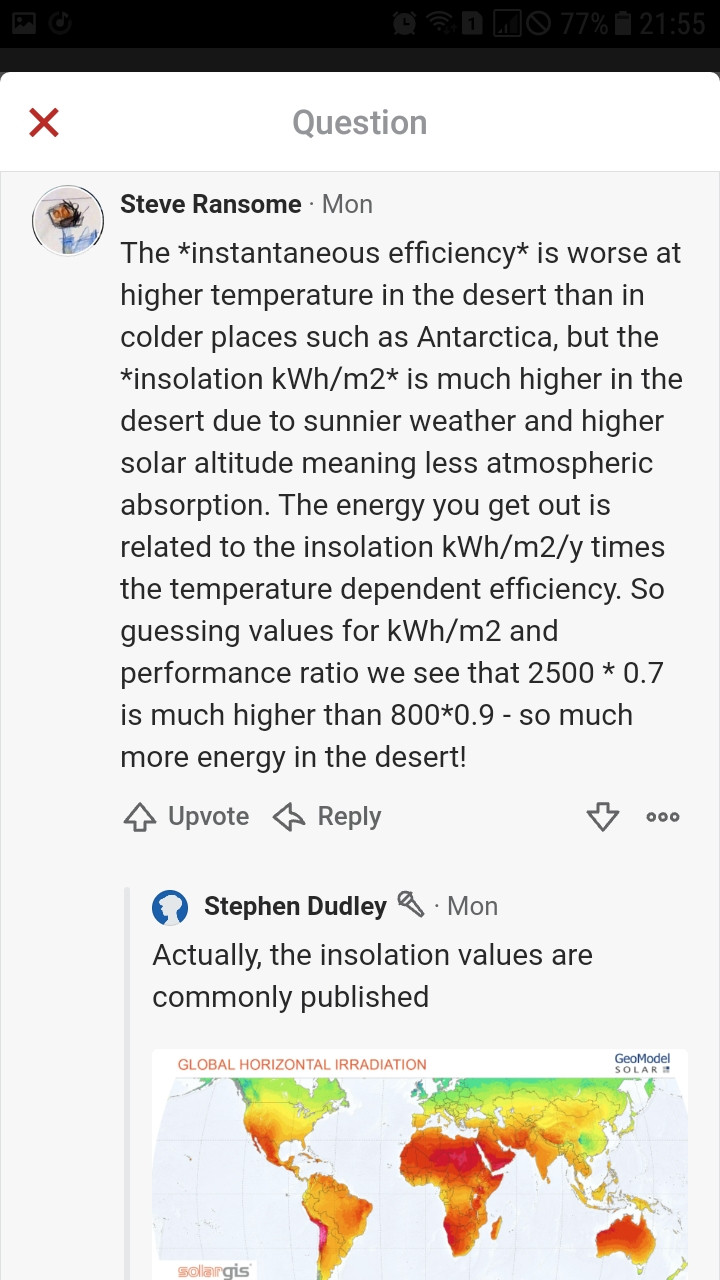 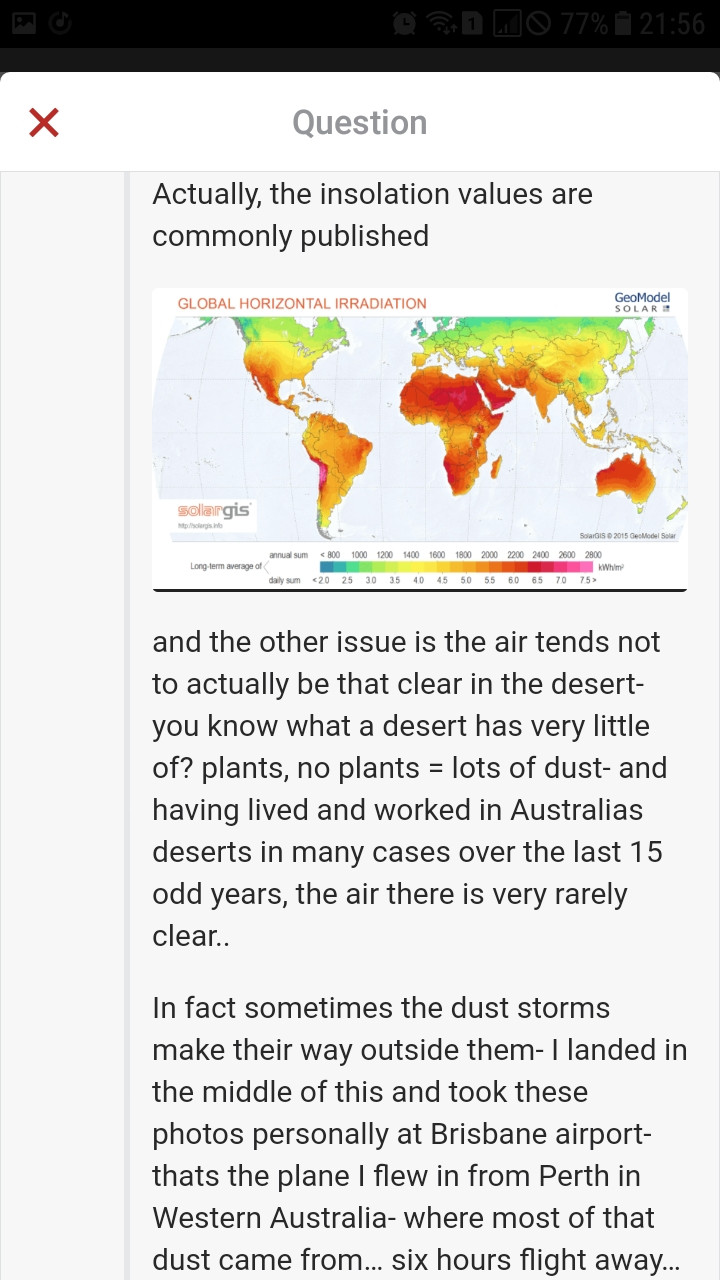 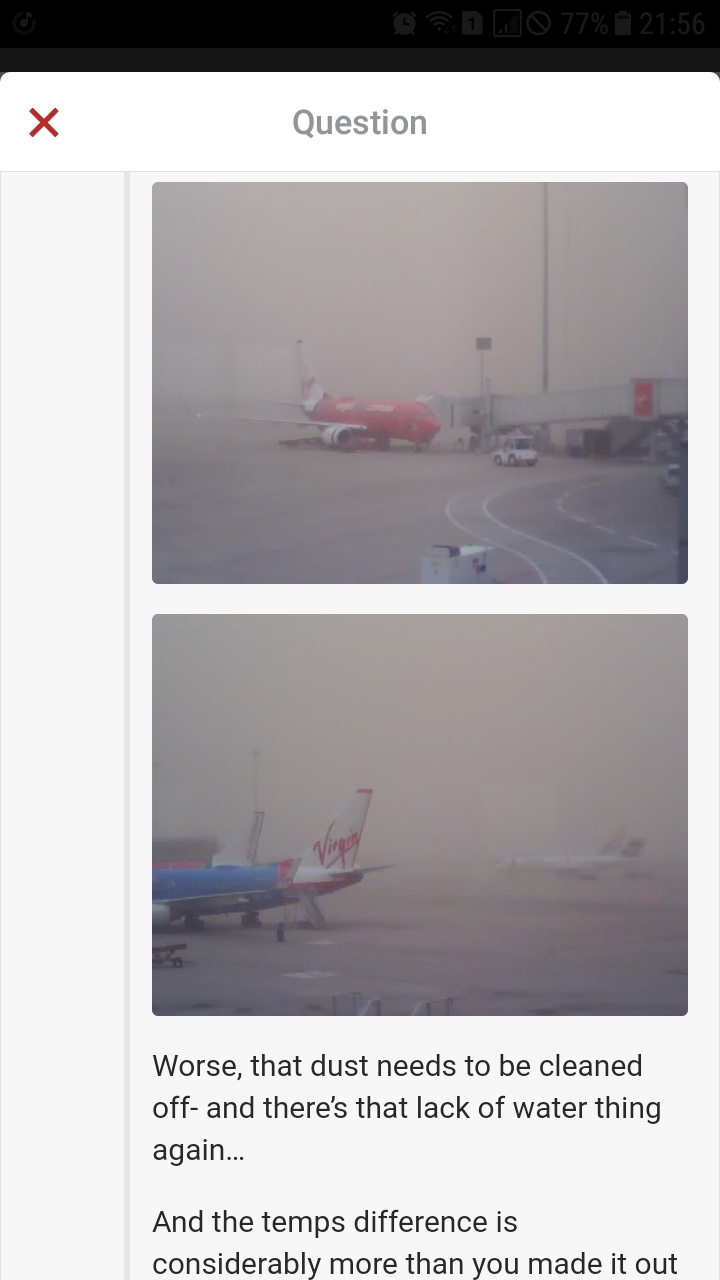 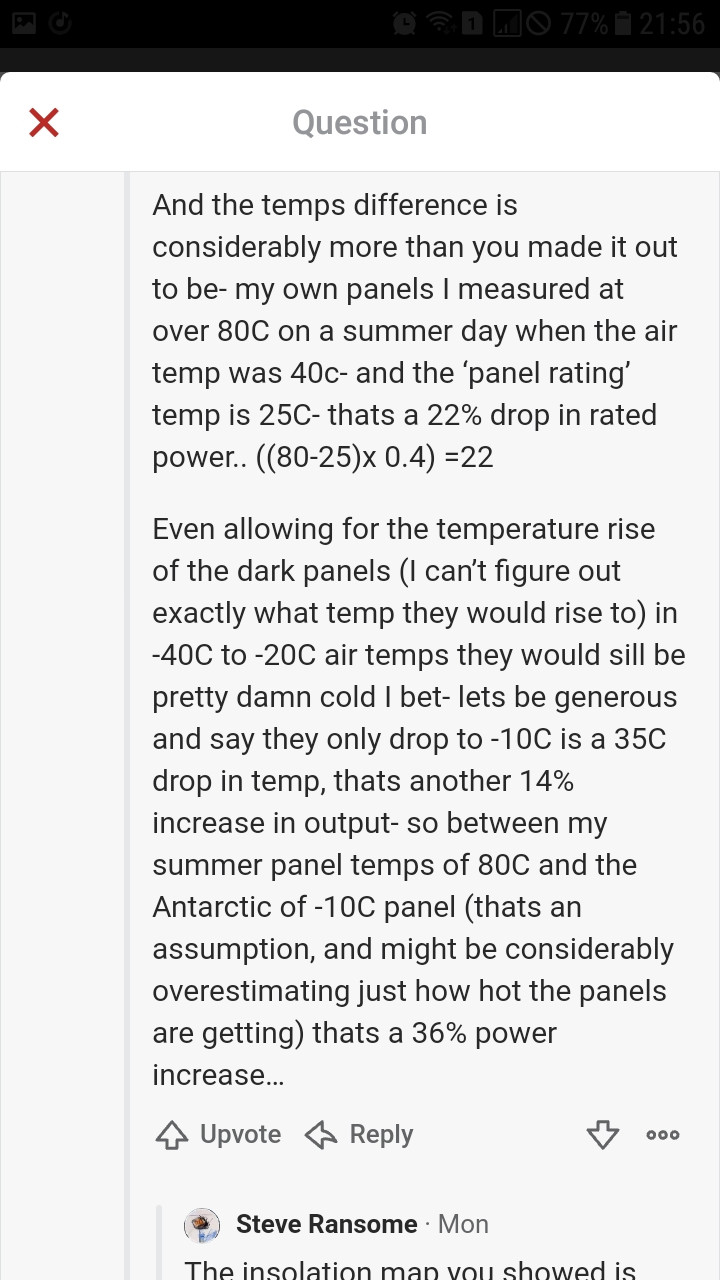 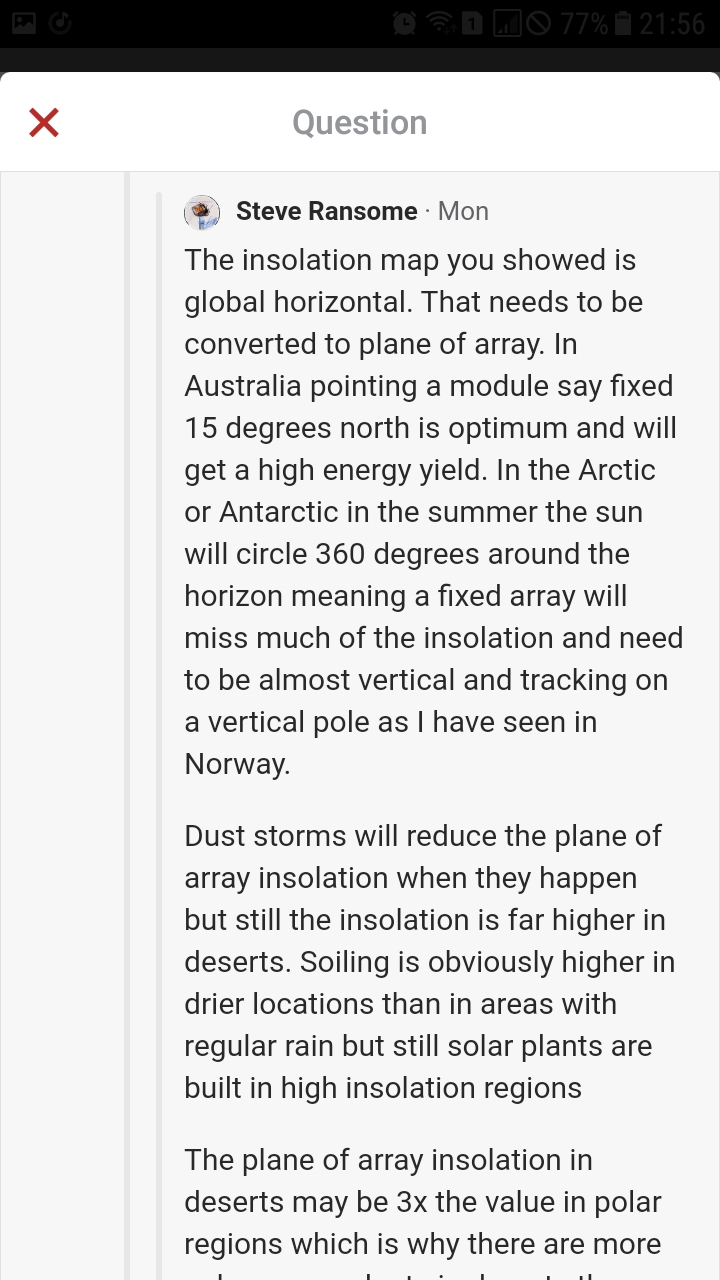 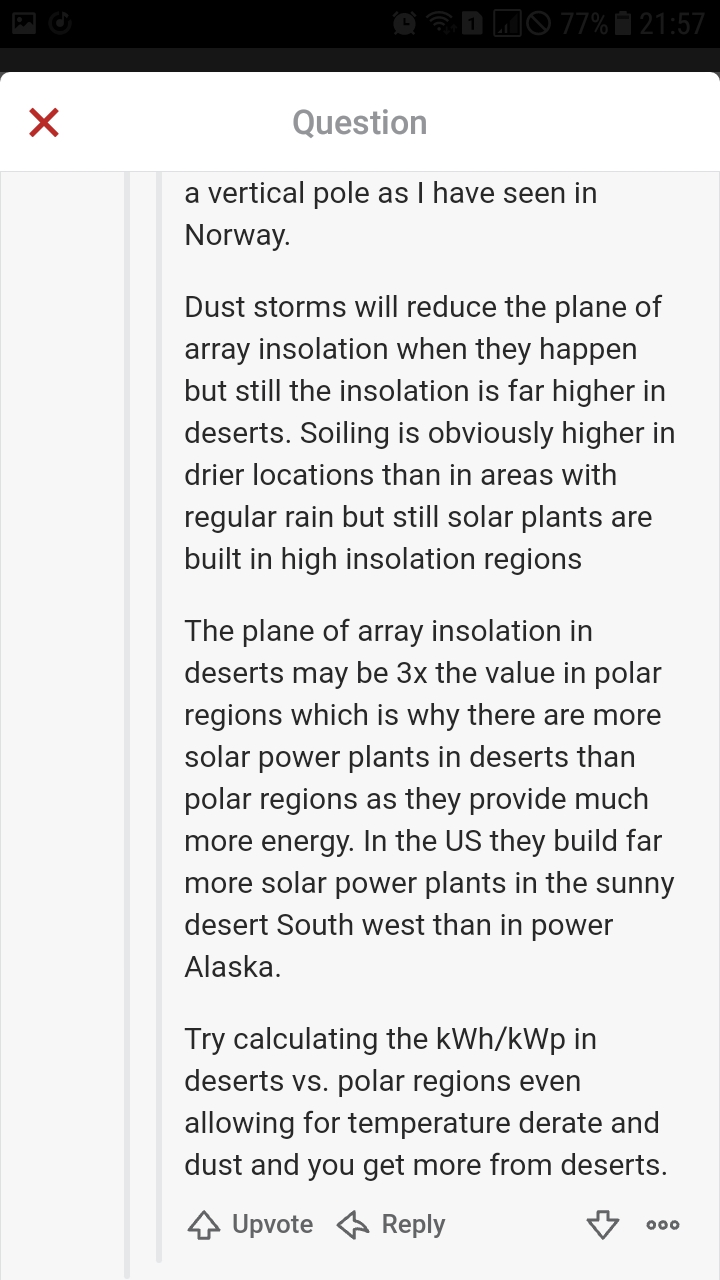 If the amount of radiation stays the same, solar panels produce more energy when they are cooler. Heat causes efficiency to suffer.

However, this is assuming the radiation amount is the same. Usually it isn't. If you consider a place that's very cold, so cold that there's snow, usually there's a reason for that. The reason being that it's winter season and the sun shines for only 5 hours per day if there are no clouds. The sun angle is also very low. The combination of low sun angle and low sunshine amount per day means that in areas that are periodically cold, practically no solar power is generated during the winter season. The summer season on the other hand has very good production figures.

If solar power is heavily seasonal, it's far less useful than it would be if you get about the same energy production every day throughout the year. It means you have to store energy during summer and consume it during winter. The trouble is, no battery or pumped hydro plant has the possibility to store such energy amounts. The only feasible solution is hydrogen but its poor 38% electricity-to-hydrogen-back-to-electricity-again efficiency and the high cost of conversion equipment (electrolysers, combined cycle power plants) and the high expense of storing large amounts of a gas that has low voluminous energy density make using hydrogen for seasonal energy storage very expensive.

Usually in climates that actually get cold in the winter, the preferred power production is wind power. At least you get wind power during all seasons of the year. Solar power is mainly useful in areas where the sunshine amount doesn't vary much between seasons, and so you can charge a battery every day and discharge it every night. That's 365 cycles per year as opposed to 1 cycle per year in seasonal energy storage. Your battery just became 365 times cheaper.

So, although solar panels produce more electricity when they're cold, you really don't want to rely on solar panels in climates where the weather can get cold in the winter.

Not the answer you're looking for? Browse other questions tagged solar-power energy-efficiency renewables electricity-generation or ask your own question.

24
Do small portable solar chargers generate more energy than it costs to produce them?
12
Forcing water circulation in solar hot water installation
10
How to measure the energy output of a thermal solar hot water system?
9
Are there types of solar panels that can be made completely locally and independent of fossil fuels?
9
Investing in Solar Panels in the UK
8
How many hours a day would you have to pedal to generate enough electricity for your apartment?
5
How much irradiation from the sun is required to generate solar power?
9
Are there solar panels that can survive extreme temperature changes?
3
Dominion Energy (Virginia) solar standby charges
6
How do solar panels degrade after 25 years of warranty?