They use no coffee beans and start with date pits, something the company says would otherwise be "discarded".

The video feels somewhat like a promotion of a product, but my question is about the mention of deforestation in relation to traditional, actual coffee and one of the claims.

Shown in the screenshot, video shows the following three items in text, citing the company as the source of the information:

and the CNN Business narrator says at the same time:

And since the date pits would otherwise be discarded, there's no deforestation involved.

Question: Would choosing coffee alternatives reduce deforestation? What is the deforestation rate associated with the coffee industry? 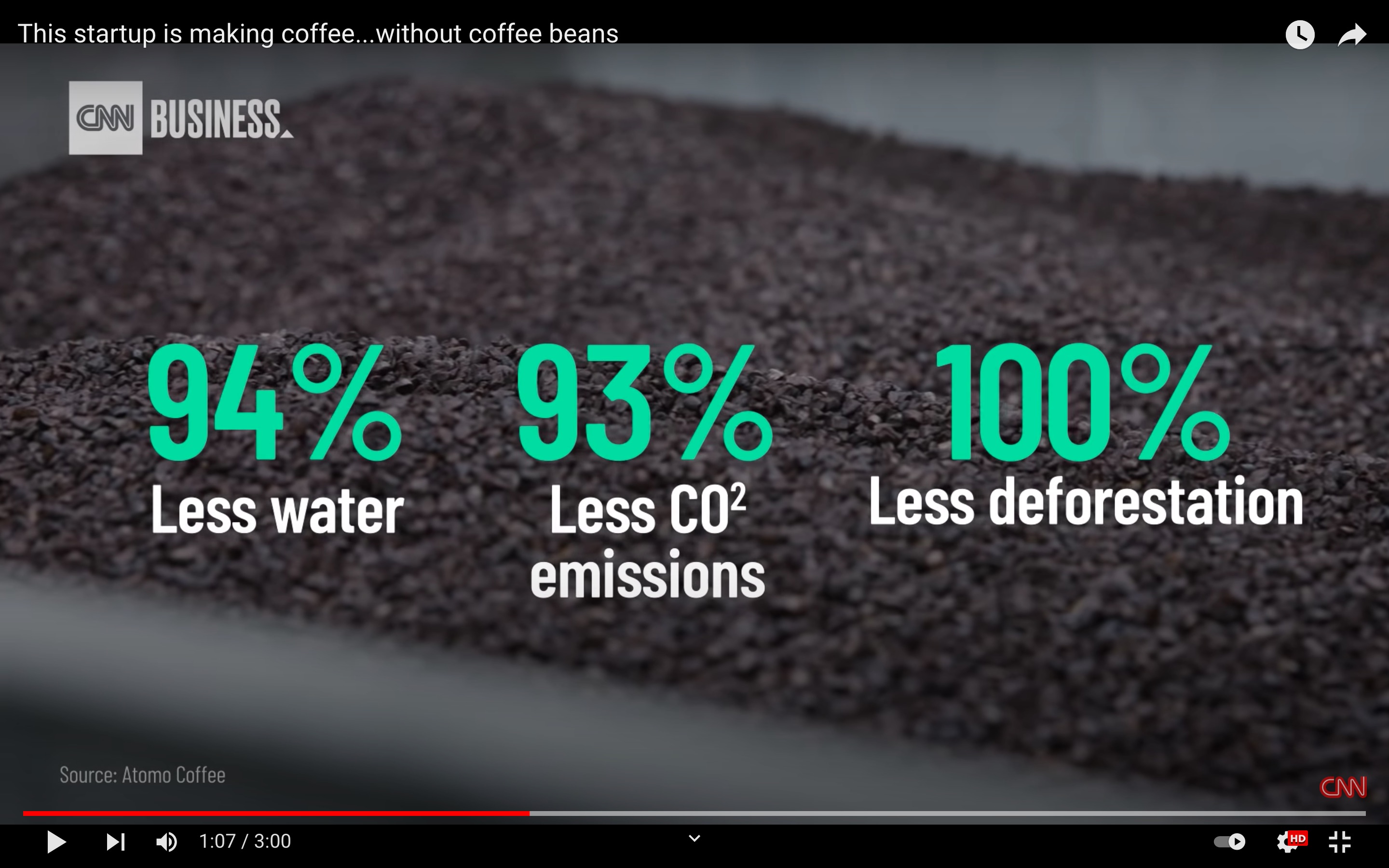 One of the things about substitutes is sometimes they don't match the real thing. I was first introduced to carob as an alternative to chocolate years ago. As nice as carob is, I still prefer chocolate. Likewise with coffee substitutes, they will only become widely used if people like them or prefer them to coffee.

Coffee substitutes have been around for a long time. Apparently in 1766 Fredrick the Great banned the importation of coffee into Prussia.

“In 1766, Frederick the Great banned the importation of coffee into Prussia, leading to the development of the coffee substitute,” and chicory coffee was born.

Chicory coffee has been around for a long time. I can recall my mother drinking for a brief period in the 1960s. For her, instant coffee was better tasting than chicory coffee.

Having listened to various people who lived behind the iron curtain, during the Soviet era, a number of them described making and drinking coffee substitutes by roasting "various items", usually grains, because coffee was either unavailable or excessively expensive. They all abandoned the substitute coffee as soon as they could.

The other question is why do people drink coffee. Do they drink it for the taste, the social aspect of meeting someone over a coffee, or for the caffeine? Can substitute coffee satisfy all of these criteria? Why Starbucks Failed in Australia gives an interesting expose into the difference between the coffee cultures of Australia and the US - less expensive, quality coffee with a social aspect compared to caffination.

Demand for coffee is increasing, deforestation for coffee production is a significant issue,

According to coffee industry estimates, in order to keep up with consumer demand for coffee, coffee production will need to triple by 2050. This will require an area the size of Honduras and Nicaragua combined to be converted to coffee. The majority of the of this expansion would come at the expense of forest habitat, threatening the remaining forests in Central America

Deforestation for coffee production is a two fold problem. Initially part of a forest is cleared to create a coffee plantation and secondly, until recently, forest timber was used as a source of heat during in coffee dryers.

The firewood used to fuel industrial coffee dryers equates to approximately 3 cm2 of forest habitat per cup of coffee.

Some producers are changing to solar and bio fuels.

Deforestation-free coffee has been considered, particularly in 2014, but there appears to be no significant results.

Varying terms used to communicate deforestation-free pledges make it difficult for stakeholders to know what exactly is being committed to. Participants expressed frustration that these terms sometimes overlap with one another and do not always communicate a clear meaning…

“deforestation-free” is a noble concept, it cannot exist in a sustainability silo, especially given all the local contexts under which agricultural crops are produced

The ultimate objective is not an end to deforestation per se, but realization of sustainable land management as a component of sustainable development… Some participants noted that one of the reasons we have not seen more deforestation-free commitments than we have is that governments are wary of making pledges that could be interpreted as hindering economic development, and that companies are concerned about sending mixed messages to their customers.”

Deforestation is not only a problem for coffee production, but also for tea, cacao and palm oil.

The main reason why companies like VTT are exploring alternative production methods for coffee, without needing any of the coffee plants and instead producing essentially the same thing with identical taste in a bioreactor is that climate change is rapidly reducing the area suitable for coffee cultivation.

Not the answer you're looking for? Browse other questions tagged alternatives deforestation coffee or ask your own question.

11
What is the most sustainable choice to write on a whiteboard?
5
What are alternatives for deodorant?
6
What are ideas to change the advertising system towards sustainability?
4
Alternatives to bottled water in the UK
3
Did any country, city, or village implement a coffee separate collection with success?
2
What alternatives exist for bean bag filler?