Is oil actually a renewable and sustainable resource, but we just use much too much of it?

Wouldn't it be great if we could just drill into the ground and find pools of a natural energy source? Sure. Well, that's oil.

Of course, there's also the issue of finding a way to use it that doesn't result in global warming. But that's another question.

What does renewable mean?

a natural resource which will replenish to replace the portion depleted by usage and consumption, either through natural reproduction or other recurring processes in a finite amount of time in a human time scale.

"Human time scale" is rather vague, but we can assume it's no more than 10,000 years, which is about how old human civilization is.

How long does oil take to form?

By contrast, crude oil (or petroleum) takes millions of years to form. Per the University of Calgary's Energy Education portal (emphasis added):

Because oil takes millions of years to form, there is no way we could reasonably classify its use as renewable.

But what if new oil is still being formed?

There's a great question about this on EarthScience.SE, and while there's no real conclusion, there's a range of suggestions from 15,000 to 80,000 barrels per year of new oil being formed. 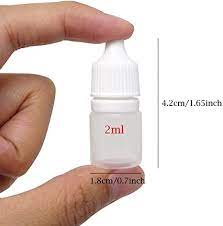 Don't spend it all in one place!

Note: the 2mL is just in the lower part of the image (the translucent bottle), and not in the top opaque part. So 2mL is even less than this image may initially convey.

I'll provide a different answer to this.

Fossil oil isn't something that is being produced at a great rate currently. So the 2 milliliters per year in the other upvoted answer is probably a good approximation.

However, a chemically equivalent liquid, renewable oil, can actually be produced in scales reasonably close to the scales oil is being consumed today. We still have to reduce our oil consumption, perhaps to 10-20% of what it is today, but not more.

For example, in this year, 19.5% of the energy content of fuels sold in Finland have to be from renewable sources. This percentage gradually rises to 30% in 2029. And the decisions were made before the accelerating adoption of electric vehicles. So the 30% was assumed to be realistic given our current rate of oil use. Realistically electric cars will make about 15% of the cars in use in 2029, so it's probably realistic to have even 35% of energy content in fuels be biofuels. Part of the 30% target will probably be bioethanol, that is not chemically equivalent to fossil fuels, but a lot of it will be next-generation biofuels that are chemically the same compound as the fossil fuels.

Every compound in oil can be made from renewable sources. The trouble is, we can't maintain our current rate of oil consumption and produce 100% of oil from renewable sources because there aren't enough feedstocks. However, if all light road transportation (passenger cars, vans, etc) become electric vehicles and only heavy trucks, buses, industrial and agricultural equipment, marine transportation, and aviation continue to use oil, the remaining oil users can very well use oil at their current rate of oil consumption. The oil will be renewable, but the vehicles don't need to care about that. It's still chemically the same compound.

Countries like Saudi Arabia can pump oil out of the ground with very little effort. And then the supply of oil is something like 300 years. Now, deep-water oil wells are high-margin operations but exploration is required to find them.

But terminologies like "sustainable" and "renewable" are political terminologies with specific purposes and limited applications. A better terminology would be "carbon-neutral".

So oil could be pumped out of the ground, reformed to hydrogen with the carbon-dioxide captured, and be carbon-neutral. Or that process might be more correctly called "zero-carbon-release". But current blue-hydrogen processes mostly use waste methane or direct natural-gas and not oil.

Then there are processes for production of synthetic methanol and synthetic gaseous gas. Carbon-dioxide is captured from industrial processes and combined with green-electricity to produce these synthetic fuel products. But are these processes carbon-neutral or are they two uses of one carbon-release ? How should they be accounted ?

And so "sustainable" and "renewable" can simply be administratively determined while "carbon-neutral" would require a rigorous accounting.

Not the answer you're looking for? Browse other questions tagged energy renewables electricity-generation defining-sustainability oil or ask your own question.

2
Can oil be used as a fuel source without contributing to global climate change?

25
What form of electrical lighting has the smallest energy-footprint?
5
Is an incrementalist approach to decarbonisation feasible?
1
If we can capture landfill gas, why can't we capture cows' burps and use them as a source of energy too?