Technical details The Rockefeller Foundation provides to justify a projected 15 cents/kWh for rural solar mini- and micro-grid solutions at scale?

In CNN's April 25, 2022 Hear bold new idea to bring clean energy to billions journalist Fareed Zakaria interviews Dr. Rajiv Shah, the President of The Rockefeller Foundation. Here is a bit of the conversation after the 2 minute mark:

Zakaria: What is the technology at the core of your bet, what is it that makes you think you can provide that much energy, that much power, that much electricity to those many people?

Shah: Well the answer to that question is really renewable energy systems. We've seen over the last decade as Rockefeller has been pioneering this work to reach lower income communities with say solar mini-grids, we've seen the cost of power go down significantly. Photovoltaics have gone down 90 percent, energy storage is down more than 80 percent, we're about to make a huge leap into lithium ion phosphate battery storage for stationary energy grids and small, mini- and micro-grids.

It's now cheaper to provide power this way than it is through either dirty diesel generators or coal connected to grids that try to reach into these communities and do so poorly. So...

Zakaria: (interrupting) Why is the market not doing it already? Why do we need the Rockefeller Foundation?

Shah: Well most government utilities look at providing power to rural communities in particular as just a traditional loss-maker. To them, you build a big coal plant near a city connected to a grid, the extra cost of connecting grid connections out to rural communities, to villages, to small towns and cities in those settings is expensive, and then the power that they deliver on it is erratic, and their systems are not very good for doing that.

These new systems are loaded with technology. In addition to photovoltaics and battery storage, they also use remote, artificial intelligence-based energy management systems. We have smart meters that allow a very poor household to pay for only what they consume and do so via their phone and do it very efficiently so that these systems are economically productive.

And frankly Fareed because these work, we've partnered with Tata Power1 which is now rolling out ten thousand of these systems in India. **We'll get the cost down to under 15 cents per kilowatt-hour at which point it beats every alternative source of energy, and we'll help 25 million people not just move out of poverty, but do it on a green development path that safe for our planet and for their local communities.

Question: What technical details and projections does The Rockefeller Foundation provide to justify a projected 15 cents/kWh for rural solar mini- and micro-grid solutions at scale?

Of course answers based on a technical analysis and comparative systems are also welcome, but this is primarily a resource request question; presumably at this point with the first thousand systems being built with partners there will be enough information available for them to internally justify 15 cents/kWh, but I'm interested in how much has been shared.

Screenshots from the video; images supplied by The Rockefeller Foundation (for reference): 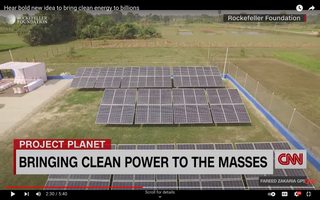 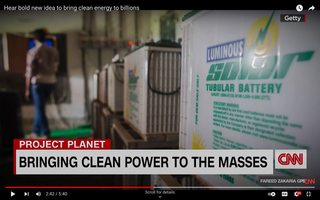 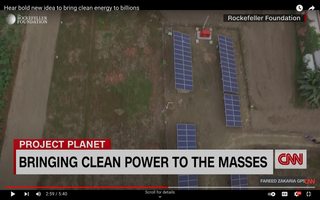 Browse other questions tagged batteries photovoltaics energy-management off-grid or ask your own question.

29
Estimating the cost of solar panels and return time?
3
Is 3 phase electrical generation more efficient to utilize than single phase?
5
Energy storage idea: Pumped hydroelectric storage in ocean using difference in salt content
5
Will customer preference drive adoption of energy storage the same way as EVs and solar power?
6
Size and reliability of inverter for refrigerator in an off-grid tiny home
2
Are there any active vehicle to grid programs around the world that are accepting customers?
3
PV system: Which to upgrade first: panels, inverter, batteries?
1
How to use solar power with grid backup without net metering