How much of the emitted CO2 is human caused

I wasn't able to find literature that would answer this in percent. The closest reference I was able to find is:

Update/Clarification: In this question I am only asking about CO2 concentrations/emissions (how much is natural and how much is human caused), either measured or best estimate. The answer might be complicated, but I am specifically not asking about any possible influences on temperature (or climate change), that's a completely separate question, which I might ask later.

Further clarification: various estimates agree that the total human caused CO2 emissions are around 30 gigatons/year. The carbon cycle explains, among other things, how CO2 is circulated in the atmosphere. Is there a scientific consensus (based on evidence, not opinion) whether or not the 30 gigatons/year contribute majority (i.e. 50% or more) of the 2.66 ppm/yr increase in 2012 of the atmospheric CO2 concentrations?

Fossil fuels contain less carbon-13 than carbon-12 (and no carbon-14), compared with the atmosphere, because the fuels derive from plants, which preferentially take up the more common carbon-12. The ratio of carbon-13 to carbon-12 in the atmosphere and ocean surface waters is steadily falling, showing that more carbon-12 is entering the atmosphere. This ratio doesn't directly correspond to world ppm or even relate directly to the quantity released because they are just looking at the ratio.

This change in ratio is only tracked to show there is a correlation between human activity and CO2. The same can be said about the relative drop in carbon-14 as well.

The carbon cycle is complex and different sink absorption times and source release times make it hard to separate from the current ppm measurements. It is probably impossible to say 10% is from X, 15% is from Y and 75% is from Z.

What is well tracked is the industrial and human sources which have climbed. The question still out there is how well do the sinks work? What are their limits/tradeoffs? What new sources might arise in a warmer climate? It's possible a small amount of man-made CO2 could cause a larger release of natural CO2 and create a domino effect of warming.

In general the human related output of 29 gigatons of CO2 is tiny compared to the 750 gigatons moving through the carbon cycle each year, but it adds up because the land and ocean cannot absorb all of the extra CO2. About 40% of this additional CO2 is absorbed. The rest remains in the atmosphere, and as a consequence, atmospheric CO2 is at its highest level in 15 to 20 million years. A natural change of 100ppm normally takes 5,000 to 20,000 years. The recent increase of 100ppm has taken just 120 years.

The predictive models of the temperate cycle based on greenhouse gases and energy input/outputs can be tested against observations to see what might contribute to the temperature rise. 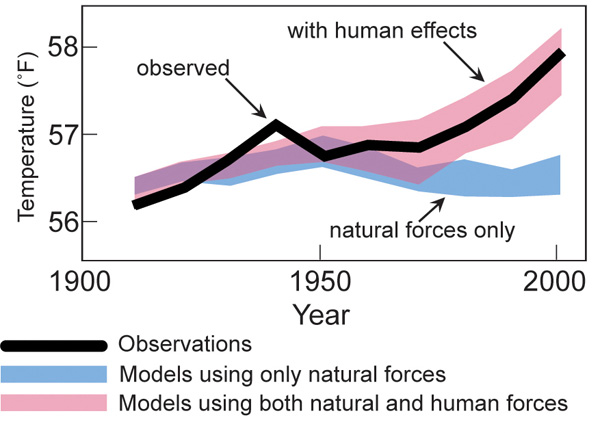 Edit: In one of the links I provided was from the IPCC. Thousands of scientists and other experts contribute (on a voluntary basis, without payment from the IPCC) to writing and reviewing reports, which are reviewed by representatives from all the governments, with a Summary for Policymakers being subject to line-by-line approval by all participating governments. Typically this involves the governments of more than 120 countries.

In their report linked above (which you must read completely if you're serious about this subject) they summarize the increase of greenhouse gases:

For about a thousand years before the Industrial Revolution, the amount of greenhouse gases in the atmosphere remained relatively constant. Since then, the concentration of various greenhouse gases has increased. The amount of carbon dioxide, for example, has increased by more than 30% since pre-industrial times and is still increasing at an unprecedented rate of on average 0.4% per year, mainly due to the combustion of fossil fuels and deforestation. We know that this increase is anthropogenic because the changing isotopic composition of the atmospheric CO2 betrays the fossil origin of the increase. The concentration of other natural radiatively active atmospheric components, such as methane and nitrous oxide, is increasing as well due to agricultural, industrial and other activities. The concentration of the nitrogen oxides (NO and NO2) and of carbon monoxide (CO) are also increasing. Although these gases are not greenhouse gases, they play a role in the atmospheric chemistry and have led to an increase in tropospheric ozone, a greenhouse gas, by 40% since pre-industrial times (Chapter 4).

The idea is that over decades we can measure our human based output and then measure the increase in the sinks vs atmosphere. Then we can estimate how much contributes to the overall atmosphere. Since sinks can sources all have different carbon time cycles you can not say "this year x% of the ppm increase is anthropomorphic". You can say that over the decades we see that x% produced leads to y% absorbed and a corresponding z% increase in the atmosphere. But as the sinks saturate and temperatures change they change too, so it is not a rule but a dynamic system which we try to model to understand it. We model these complex systems so that we can answer the types of abstract questions you are asking. "What does this measured ppm increase mean exactly? What are the possible contributors? What happens yearly? What happens monthly? Why is the average temperature increasing by x? What happens if XX process doubles, or halves?"

Given that CO2 has such a major role in the natural greenhouse effect, it makes intuitive sense that changes in its concentration because of human activities might significantly enhance the greenhouse effect. However, calculating the impact of a change in CO2 is very different from calculating the current role with respect to water vapor and clouds. This is because both of these other substances depend on temperatures and atmospheric circulation in ways that CO2 does not. For instance, as temperature rises, the maximum sustainable water vapor concentration increases by about 7% per degree Celsius. Clouds too depend on temperature, pressure, convection and water vapor amounts. So a change in CO2 that affects the greenhouse effect will also change the water vapor and the clouds. Thus, the total greenhouse effect after a change in CO2 needs to account for the consequent changes in the other components as well. If, for instance, CO2 concentrations are doubled, then the absorption would increase by 4 W/m2, but once the water vapor and clouds react, the absorption increases by almost 20 W/m2 — demonstrating that (in the GISS climate model, at least) the "feedbacks" are amplifying the effects of the initial radiative forcing from CO2 alone. Past climate data suggests that this is what happens in the real world as well. (from nasa)

2
Does human activity result in a net increase or decrease in co2?

9
What is the share of global human CO2 emission of cargo transport by ship?
7
How much CO2 do those gas flame pits outside restaurants emit?
10
How much CO2 do I cause with one Google search?
5
Why is the per capita CO2 emissions so much higher in Wyoming than in the Northeast?
4
How much increase in GHG emissions is caused by Amazon Prime?
3
With current technology, how much CO2 is emitted when making renewable power plants?
2
What are the impacts on CO2 emissions from using cloud software?
3
How many grams of CO2 are emitted to produce one paper napkin?
3
How much additional CO2 emissions will result from recent changes to US vehicle regulations?