I want to install some solar panels around 1 kWp. All the suppliers nearby offers me a central inverter solution. Should I look for a micro inverter solution? Or is something that I shouldn't bother?

For small systems, go with the central inverter, assuming it's lower cost (they usually are, at the moment), unless your system is going to suffer from partial shading during the day, in which case micro-inverters are probably the way to go. PV system suppliers should be able to offer you simulations of the options, but bear in mind they'll be optimising their profit, rather than optimising the deal for you.

Let's look at why micro inverters are interesting.

The amount of power generated by a panel, given a particular level of light on it, is determined by the voltage put across the panel. The voltage is set by the inverter, which tracks the maximum power point (Pmpp in the graph below). 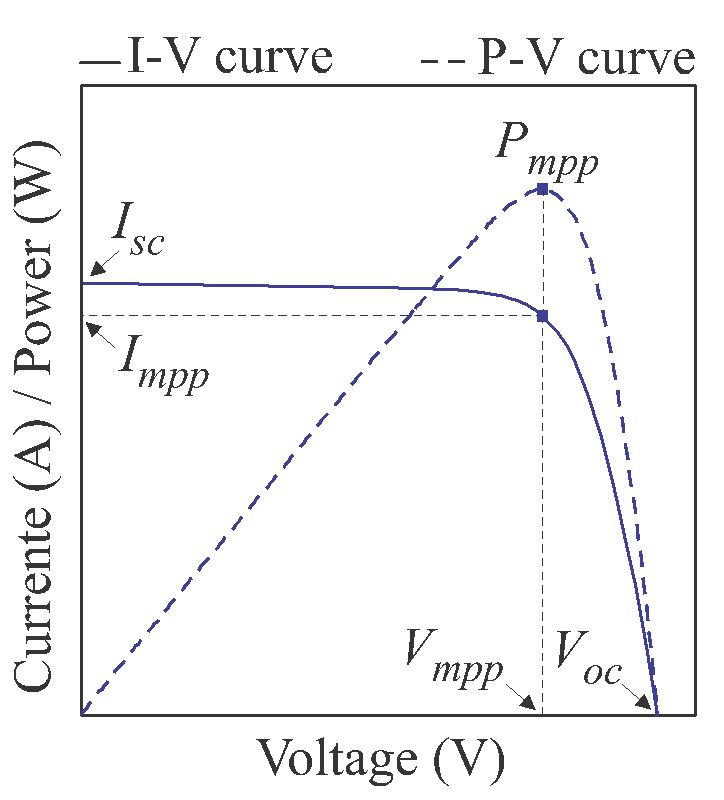 One way this has been dealt with to date, is by provided panels in batches that are closely matched in performance characteristics.

But additionally, if there's partial shade across just some of the panels, either from nearby trees or buildings, or from bird droppings on the panel, that can really drop the power generated by that panel: and if that panel shares an inverter with others, the output from all will be affected.

And inverters can chuck out a lot of heat, and can get large: the central inverter is a monolith, and running hot will shorten its life, which means big central inverters need cooling (doesn't need to be air-con, but might be).

So one solution to tackle all this is is to optimise the voltage on each panel separately, using micro-inverters.

There's been a bit of a debate for several years about the relative maintenance schedules of micro- versus central inverters. It's too early to tell, really, which has the lower whole-life cost; and the industry is moving so fast, that what we learn about inverters made 5 years ago, has to be adjusted in the light of rapidly changing prices, which changes the proportion of total system cost represented by the panels.

The string inverter sits halfway betwen the two: rather than one inverter for the whole system, or one per panel, there's one per string of panels, which offers advantages of each: not really applicable to smaller (in the kilowatts) system, but important for very large ones (megawatts).

Not the answer you're looking for? Browse other questions tagged electricity solar-power photovoltaics or ask your own question.

7
What scope is there for price reductions in photovoltaic inverter costs?
10
Solar PV panels - Worth the cost of more efficient panels?
4
How can I install solar panels far from the regulator?
3
PV system: Which to upgrade first: panels, inverter, batteries?
2
How to work around a supposed Huawei SUN2000L-5KTL inverter throttling issue
4
Can residential rooftop solar arrays be cheaply extended over time?
28
Why am I offered a 5 kW inverter with a 6.6 kW solar installation?
2
How to identify the rating of my electrical panel
4
Any way for microinverter PV array to power a house when the grid is down?