How sustainable is Tokyo's city-wide garbage separation and recycling programs?

I'm using the example of Tokyo, Japan, as it is a massive megacity and also, from personal experience having lived there for 4 years.

Not only are the public rubbish bins across the city segregated into trash and recyclables (as is the case for many cities), such as in the image below: 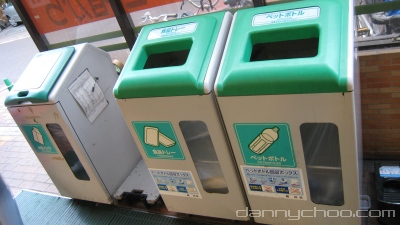 Household rubbish is also segregated, usually if you live in an apartment building, such as shown below: 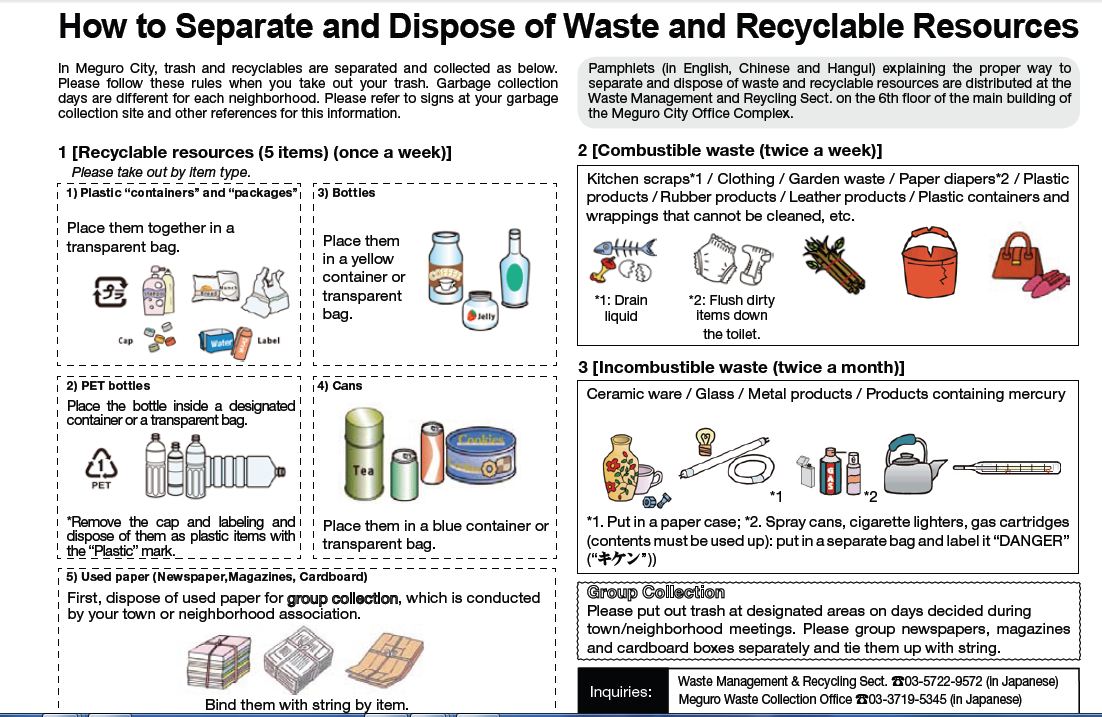 Image source * Even though the website discusses Manila, Philippines waste disposal, the image is taken from Meguro-ku, which is part of Tokyo.

How sustainable is this type of waste segregation and recycling program?

Actual data would be appreciated.

(This is not really an answer, more a mixed bag of additional background information, but it got a bit too much for a comment.)

Previously, in Tokyo, we used to split waste into burnable and non-burnable, with the latter going into landfill; that was stopped a few years ago because it was "too expensive". So now it all gets burnt. (I.e. both categories got combined into what is now called "combustible waste" in your diagram.)

There is another category called "sodai-gomi" (bulky rubbish). The definition of this is over 30cm in any dimension. (See http://www.city.toshima.lg.jp/kankyo/9316/009383.html in Japanese) You have to book the pick-up in advance.

But they won't collect motorbikes, bikes, TVs (cathode-ray, LCD or plasma), air conditioners, fridges, freezers, washing machines, dryers or computers. Those are normally collected by private individuals, who drive around in trucks. They claim they will take stuff for free, and might if it was in really good condition, but generally you pay them a few hundred yen. Stuff in really good condition they will sell, some stuff gets shipped overseas (the Japanese are snobbish consumers, S.E. Asia are not), I imagine scrap metal gets melted down, and the rest is dumped. China made rare metals are political issue a couple of years ago, so recycling is being done as much to avoid blackmail as for economic reasons. Here is one company: http://www.suzuki-industry.co.jp/eng/system/ (sadly, their English is straight out of Google Translate)

The other way you can get big electronic goods recycled is by contacting the shop that sold it to you. This may be greener (they will find it harder to get away with illegal dumping), but is more expensive; there are some prices halfway down this (English) page: http://www.realestate-tokyo.com/news/garbage-collection-in-tokyo/

Most recycling shops will only take goods in excellent condition, or only in a certain category. They pay a few ten or a few hundred yen per item, generally about 10% of what they think they can sell it for. My favourite shop is: http://kingfamily.co.jp/ (sorry, Japanese only). They will take everything (though clothes only). They pay 100-150 yen/kg for items they think they can sell, and 1 yen/kg for everything else. The unsellable clothes either get sold to factories (for "sofa filling" when I asked), or shipped overseas.

I should also point out book recycling. Lots of small 2nd hand book shops, but there is enough profit for a big business: http://www.bookoff.co.jp/en/ (corporate site, but at least it is in English). Book Off are a delight in that they will buy everything (usually at around 10 yen a book); the smaller shops have limited space so just take the pickings. 2nd hand books sell at between 100 and 1000 yen.

Back to the theme of "sustainable", the real potential is at the other end: the Japanese obsession with packaging. It is no exaggeration to say it is typical to buy individually-wrapped sweets or biscuits, which will be in a box, which is covered in plastic wrap, which will then be put in a bag unless you beg the shop not to give you a bag. Given the very low nutritional value of the food, this is around 99% waste.

Supermarkets now either charge 5 yen or so per plastic bag, or give you a 2 yen or so rebate if you say you don't need a bag. Convenience stores do not do this currently.

28
Is it sustainable or necessary to use potable water to wash waste before recycling?
16
What is the most sustainable way to handle food waste...throwing food scraps into garbage or down my sink's garbage disposal?
9
Are mobile phone recycling programs keeping pace with the rate of phone upgrades? A global perspective
12
How to sustainably deal with garbage?
4
When are manufacturers required to mark products and packaging with recycling codes?
3
Is garbage separation beneficial, if yes, how beneficial is it?
6
How can I enforce the garbage recycling?
5
How do municipalities calculate reported diversion and recycling rates?
5
Is putting plastic in the garbage better than putting it in the recycling bin?
2
How feasible is a city with no cars and no streets?