There are a great many ways to produce biofuels, and a vast and fast-growing amount of literature on the subject. Ratios of energy returned on energy invested (EROEI) are typically in the range 1.6-6, with some particular authors putting corn ethanol at below 1.0, and others putting ethanol from wheat straw at around 35. All the figures here are presented on a well-to-pump basis: that is, everything involved in their production up to the point of delivery, but not including the end-use efficiency of whatever purpose they're put to (because that can vary a lot, depending on the purpose).

For the purposes of this answer, I'll just use "biofuels" in the sense of liquid fuels. "Biomass" or "bioenergy" are the terms usually used to refer to wider uses of biological energy sources, although some authors (e.g. ref 1) use "biofuel" to include biological sources of electricity and heat. I've excluded their results that are not for liqud-fuels.

The amount of energy you get out, compared to the amount of energy you put in, is usually referred to as the ratio EROEI (or EROI), Energy Returned on (Energy) Invested. Given the particular value of liquid fuels with high energy density, an EROEI (aka a net negative energy balance) isn't a deal breaker for biomass: it could still be a valuable means of energy storage, and a valuable economic good, though it would no longer be a net energy source.

On the original article

Your linked article says that for one hectare, 82 litres of fuel produces 1029-1356 litres of biofuel. That would be an EROEI of 13-16. Except that not all litres of fuel have the same energy content - it will vary, depending on the specific composition of the fuel.

Values from the scientific literature

The challenge is the overwhelming volume of literature on the subject. This literature search found over 1000 results, and was for biofuel energy balance reviews since 2014, and I did it when 2014 was only six weeks old. Renewable and Sustainable Energy Reviews is pretty well respected, has a high impact factor, and is bang on target, so I searched there in particular, where I found (2), a review of methods. And from GCB Bioenergy, I found (3), a systematic review. I did find (1) from 2004, one of the earlier reviews of different biofuels. Note that I've taken the extremes - the highest and lowest values - from each study. In the biofuels literature, values seem to be commonly given as the ratio of energy in to energy out: that's the reciprocal of EROEI. I've converted to EROEI here.

There are outliers such as Pimental and Patzak's estimates for corn ethanol, which give an EROEI of below 1.0.

There are also values that are negative: that is, there is no energy in, because the other waste biomass products give more energy than is needed to create the biofuel. These negative values, if valid, would have an effective EROEI higher than any of the positive values above. I've left those out, for now. 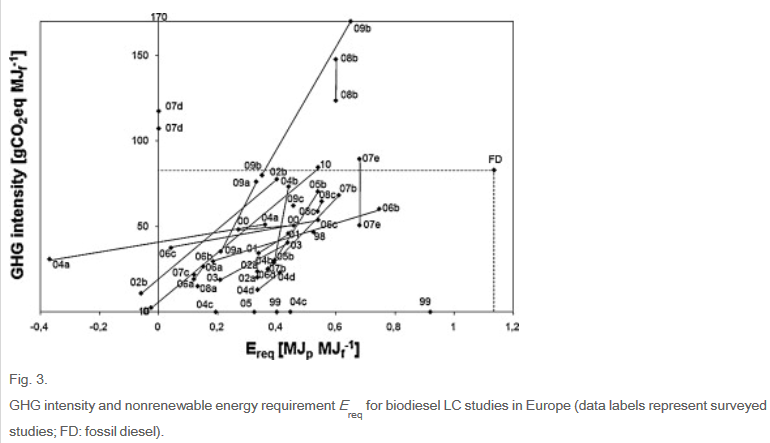 You don't need any oil to make biofuel. You can use oil, but you can use other sources of energy too.

NB Food calories are not the same as biofuel calories. There are biomass sources that are inedible for humans, fast-growing, and don't compete with food crops.

Not the answer you're looking for? Browse other questions tagged biodiesel or ask your own question.

6
Is it possible to carry out large-scale seaweed cultivation for biomass / biofuel production?