What is the state of "artifical photosynthesis" technology, as at March 2014?

I've been hearing a lot in the news about artificial photosynthesis processes that can use energy from sunlight to split water and produce synthetic fuel. Sounds pretty exciting, but being a non-physicist, I'm having some trouble separating the science from the hype. So I'm hoping somebody can set me straight.

According to the Joint Centre for Artificial Photosynthesis (JCAP), research is ongoing. Very recently, according to the JCAP's News and Events page, researchers have been researching and testing

energetics and efficiency analysis of a material capable of harnessing solar energy into fuel.

In general, the stages that JCAP appears to be at, according to their research page

spans efforts ranging from the fundamental discovery of new light absorbing materials to the design and testing of fully functional prototypes.

where the prototyping is focussed on

the design of prototype models that use dual-light absorber (tandem) configuration cells.

A list of their research is on their publications page.

In terms of what solar fuels are, the Royal Society of Chemistry article Solar Fuels illustrates the process as well as defining 'solar fuels' as being hydrogen gas, methane, carbon monoxide and methanol - these are used in both industrial processes as well as generating electricity: 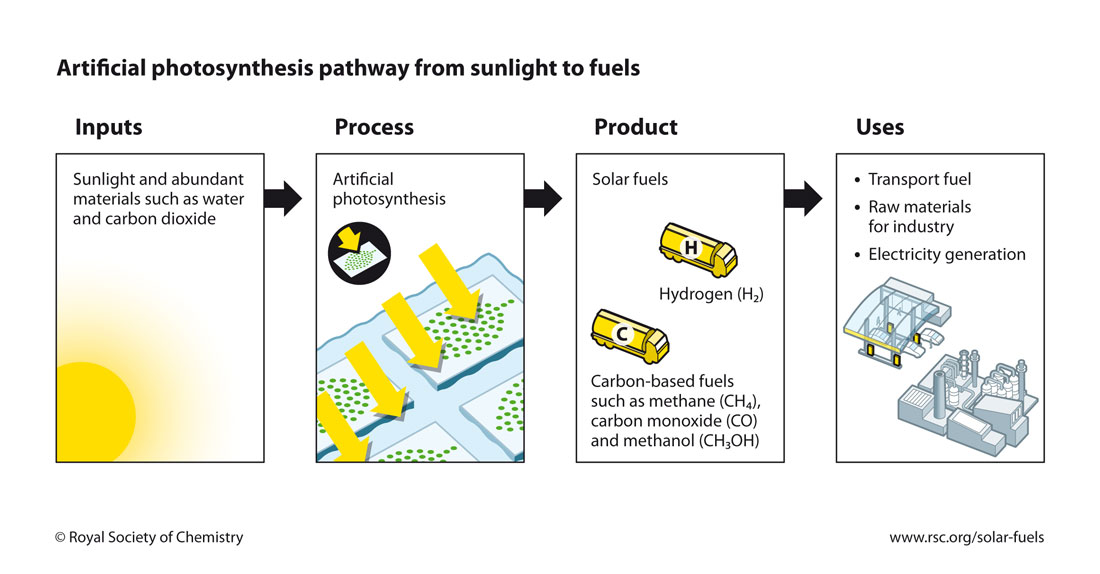 Several infographics are also provided by the Royal Society of Chemistry's page Solar fuels and artificial photosynthesis (an example is above).

I think you might've heard of the progress of a Santa Barbara, CA company called HyperSolar and their photosynthesis-inspired design for an underwater electrolysis application of nano-scale electrodes that are mass produced from copper or copper-coated material (or something like that). Fantastic technology, if it ever gets to market....

The Naval Research Lab has also done some interesting work on extracting CO2 and water from seawater and fabricating fuel from that: http://www.nrl.navy.mil/media/news-releases/2012/fueling-the-fleet-navy-looks-to-the-seas

Not the answer you're looking for? Browse other questions tagged solar-power or ask your own question.

9
Solar water heater from plastic windows - what are the considerations?
32
Which solar power technology has the highest energy return on investment (EROI aka EROEI)?
8
What have been the economic factors behind the build of tracking PV systems?
5
What is the amount of silicon in a 1kw panel?
1
What do the different rules for photovoltaics feed-in mean?
2
What do the voltage and energy readings on this MPPT charger mean?
0
What is the frequency of fires at solar power generation facilities?
1
What is the most economical and convenient house battery type?