Deciding when to stop patching a hose

When you live in the country and have hoses that are kept outside, they will occasionally get chewed on. I fix them when that happens, with a hose repair kit: 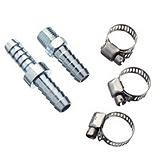 If you haven't used one of these, you basically cut the hose on either side of the hole, losing a few inches, then put the metal couplings in each new end, use the hose clamps to hold the hose onto the couplings and then screw the couplings together. There are several styles with varying amounts of metal and plastic but they all work essentially the same way. They cost $5-$10 and are often sold packed in bubble packs.

If you imagine a formerly 50-foot hose that has been patched like this say 50 times, with 6 inches or so between patches, it would be ridiculous as a hose and also the money, energy and packaging that has gone into making hose patches would exceed those of a new hose. So clearly there is some number of patches that is the limit, and on reaching that I should buy a new hose, and then remove the patch kits from the old hose and save them to use for patching the new one when it is inevitably chewed, (Note: inevitably means once or twice a year across all the hoses I use - three or four are typically out at a time. Putting the hose away after each use is impractical and besides, my shed gets more critters than my lawn does.)

How can I calculate (other than the ease of coiling, uncoiling and using the hose) the number of patches at which I should just switch to a new hose? Keep in mind I will reuse the patches from hose to hose.

Plastic hose repair connectors are (according to Amazon) 18g of polypropylene. A brass one is around 100g.

Brass, PVC and Polypropylene all have similar embodied energy - around 60-70MJ/kg (reference here) and hence similar CO2 emissions per kg.

But since you're re-using the connectors from hose to hose, your choice will always be to add just one more new connector or buy a whole new hose. One new connector will be 1.2MJ (plastic) or 6.5MJ (brass) and a new hose will be 65MJ. The connector wins every time. From an embedded energy (roughly = CO2 emissions) point of view you should keep patching your hoses for as long as you can stand it!

(Of course I've simplified a lot: effectively assuming packaging is negligible; that you were going past the store anyway so no extra trips to pick up hose connectors; that the plastic and metal ones last the same (long) time; and also I've ignored other environmental impacts like pollution and water use. But this gives you a rough idea!)

But best of all is to try and reduce the number of holes your hose gets!

If two of your hoses get too short, then you would be able to patch them together to get a longer hose.

If your most-patched hose has 6 patches on it (which cost $5 each) and the cost of a new hose is $30, then it's probably about time to retire the patched hose so that you can reclaim the patches for re-use.

However, the patches won't be evenly distributed, so it may be worth patching longer parts of hose another patched hose to extend its life (and length) without needing too many patches.

However, if it was me, I'd investigate where I could purchase a bulk pack of patches so that my total costs were reduced, and my environmental impact (on wasting pieces of hose) was reduced too. I'd guess that metal patches are likely to be more environmentally friendly to manufacture and dispose of, and easier to recycle, than hose.

You might also find that patched hoses are less useful than unpatched ones; eg they may more easily scratch cars, catch on posts, or burst. Patches also are unlikely to be reusable indefinitely. It's not going to be an exact science.

I decided to make a spreadsheet. The rows are the number of holes over which you are going to run the strategy. The columns are your strategy: buy a new hose every time, patch one hole and then on the next buy a new hose, patch 5 holes, 10 holes etc. Here's the result: 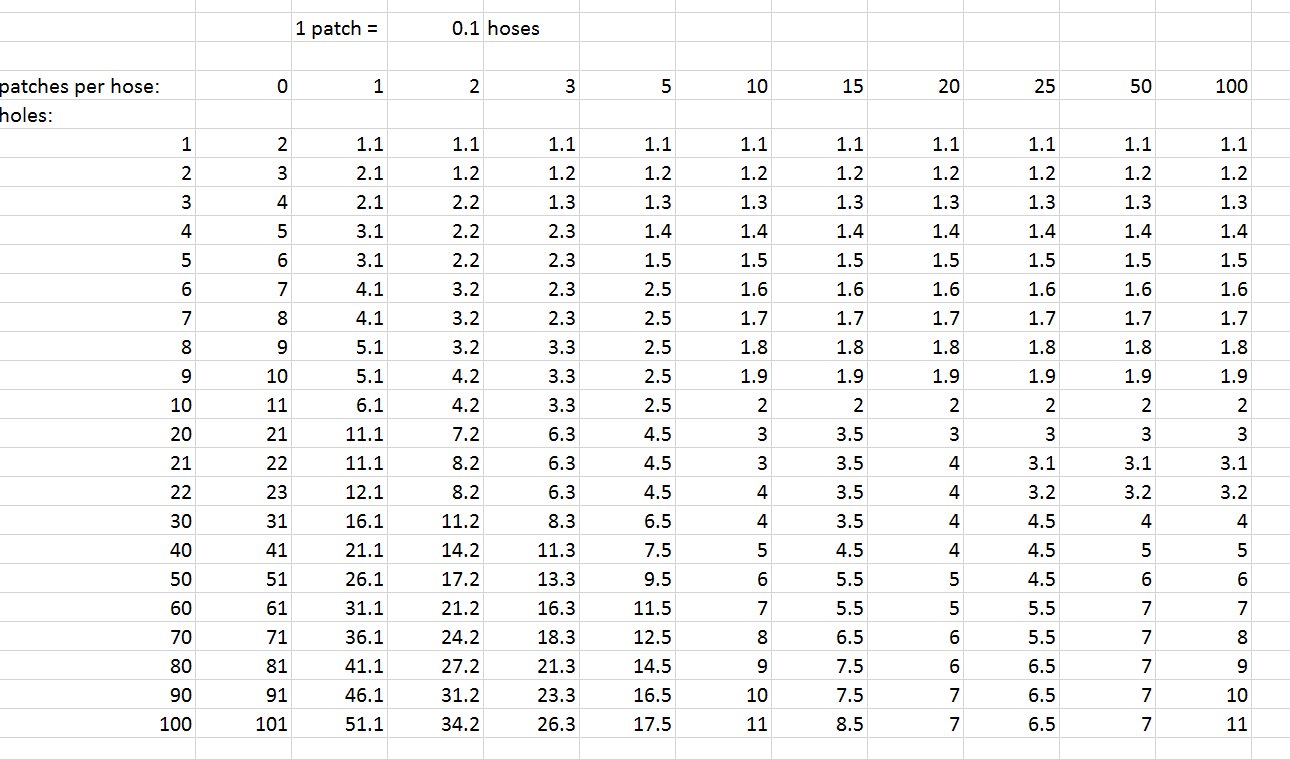 So for example if you get 10 holes, all the strategies that replace after less than 10 patches have the original hose, one or more replacements, and however many patches are acquired until the limit was reached. All the other strategies have the original hose, and 10 patches, which are worth one hose. (Worth here might be money, carbon footprint, embedded energy or whatever. It's a variable in the spreadsheet.)

Since I think 10 patches is more than enough in a 50 foot hose, I will probably limit myself to that. But it's interesting to see that there is an optimum. I expect that 40 holes is a good lifetime limit, so 20-year-olds could consider investing in 20 patches, acquired over the first half of their life, then replace the hose and spend their golden years using up the existing patches for a second time.

Not the answer you're looking for? Browse other questions tagged gardening consumption repair or ask your own question.