The rate and types of degradation differ a bit depending on the panels. Common to all types is water ingress within the panel itself, causing corrosion of the wiring.

Monocrystalline silicon (aka mono-Si) is very stable, chemically and mechanically; so, to a slightly lesser extent, is polycrystalline silicon (aka multi-Si). The individual cells can have the encapsulant stripped off, and then be used in a new module. That gives a clue as to where part of the degradation is: the encapsulant gets scuffed and marked, reducing its transparency, meaning less light reaches the cells. You can occasionally get cracking across some cells as well, either through violent mechanical disruption or thermal stress - high rapid changes in temperature causing differential changes in size of cell and surrounding materials

Thin film panels seem more prone to higher rates (> 1% per year) of degradation, and this is in part due to chemical changes in the PV material itself. Back in the 1990s, amorphous silicon panels were expected to have quite short life times, experiencing significant degradation in less than ten years. That seems to have improved since 2000. Here's a chart from Jordan & Kurtz 2012 on reported annual performance degradation rates, by type of panel, for installations pre and post 2000: 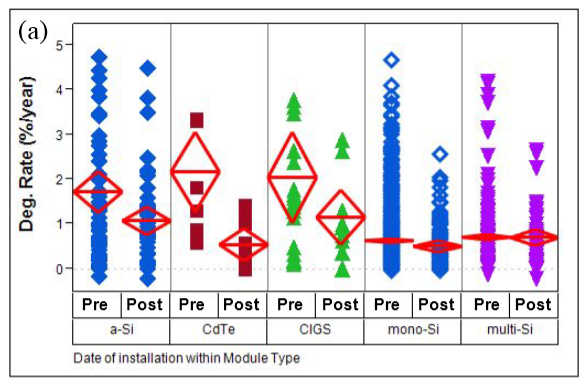 For more, see PV Education on panel degradation, and this pdf of NREL's analytic study of PV degradation (Jordan & Kurtz 2012).

Economics: going out of your way to reduce the very slow rate of degradation is generally not worth it, given the ongoing cost reductions, and the increasing availability of panel recycling. And even if a panel at 80% of its output isn't as much use to you, it could well be to someone else, so you may be able to find someone else to reuse it, postponing the time when it is recycled.

If a panel really isn't going to be used for a while, you could consider arranging for it to be away from large temperature changes, closed off from water and water vapour, and protected from mechanical impacts such as bird strikes and hail.

And in general, there are things you can do to extend the performance and life of your system. Avoid heavy mechanical stress on the panel. Clean the surface every six months or so; don't ues a scourer; avoid anything which might causing browning of the surface. Ideally, just use a soft damp cloth to wipe the surface. Attach bird spikes to the top edges of the panels if there's a recurring issue of birds defecating on the panel surface.

Not the answer you're looking for? Browse other questions tagged photovoltaics durability or ask your own question.

5
What exactly is Potential Induced Degradation in PV panels?