What is the number 1 country by global installed wind capacity: the United States or China?

In the following graph: 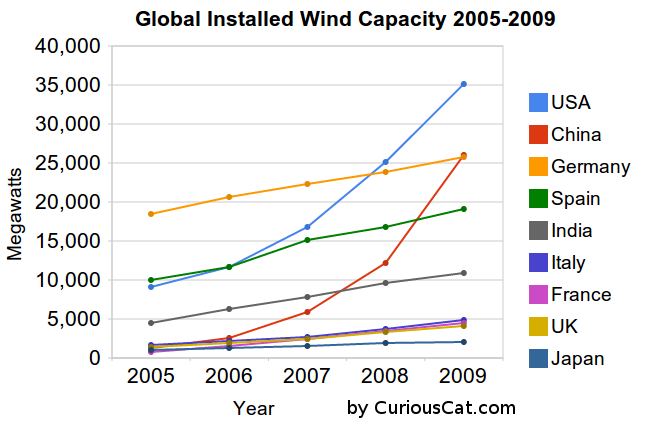 We see that China surpassed every single country in wind energy production, except the United States.
But these statistics are up to 2009 only.
So my question is: what about today in 2014?
Did China equal or maybe even surpassed the United States?

And for generation in 2014, the figures were: 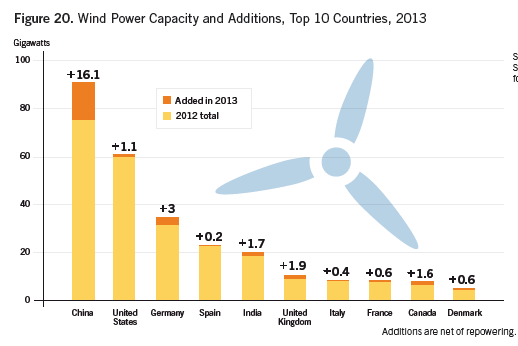 Note that this is installed capacity, not electricity generated. Capacity factors (the ratio of mean power generated to installed capacity) vary over time, due to inter-annual variations in weather; they also vary by country. So just because one country had a higher installed capacity, does not always mean that it generated more electricity from wind. The IEA data (Renewables Information 2014) for 2013 says that the USA generated about more electricity from wind, in absolute terms, than China did (USA 19.4 GW mean power, China 16 GW mean power - the latter figure is from the REN21 GSR2014). So in absolute numbers, of amount of electricity generation from wind, the USA was the world leader in 2013 (the most recent year for which comparable data is available). Higher capacity factors, less curtailment from transmission bottlenecks and grid controllers, and more readily available transmission infrastructure, are all parts of the explanation for this.

Getting trustworthy statistics out of China is very difficult: in many reports, you'll often find that the statistics from China come from personal correspondence with specific Chinese bureaucrats.

In addition, China does things differently to a lot of other countries, including the USA. In China, wind plants often get built before there's a suitable grid connection available for them: they build the transmission network once the windfarms are built. It usually works the other way around in the USA and many other countries. So GW of wind capacity installed can be measured on a different basis in different countries.

25
What form of electrical lighting has the smallest energy-footprint?
12
How much energy does it take to create a single light bulb?
3
What are the biggest supply-side logistical constraints on the expansion of offshore wind?
32
Which solar power technology has the highest energy return on investment (EROI aka EROEI)?
5
What is investment/outcome ratio for wind energy in terms of energy (EROEI)?
7
What are the physical limits on wind turbine size?
7
How are readings from the wind sensors mounted on wind turbines influenced by the blades' wakes?
3
What is a good database containing wind speed and direction?
3
With current technology, how much CO2 is emitted when making renewable power plants?