My dining room lights are shown in the pictures. I have two of those fixtures, with 3 bulbs each.

1) On the plastic chandelier it says "MAX 40W", but the lamps that when I first arrived in the flat are 42W 240V (see picture below). Why? Is that a problem? 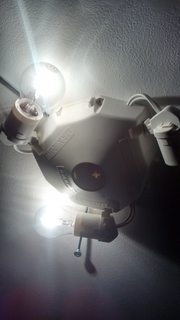 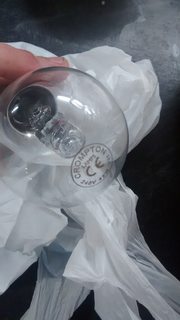 The wattage given on the fixture refers to the maximum that can safely be used. That will be dictated by two things: The internal wiring of the fixture, and the heat that it can tolerate.

In reality the additional 6W of the three 42W lamps that you are using is probably not going to be a problem, but it would be wrong of me to advise you that it's OK - you are drawing more power than the fixture is rated for, and so it is potentially unsafe.

When this fitting was designed, it was probably intended for 40W incandescent tungsten lamps. What you seem to have there are 42W incandescent tungsten-halogen lamps (often simply known as "halogen"). They were probably be marketed as "energy saving", as they are intended to replace 60W non-halogen lamps, but in your case are using roughly the same amount of energy to give more light.

So, you will need to consider whether you need as much light as you are getting at present, or whether you can cope with something dimmer. Then there are three options:

My first choice would probably be the LED option, given the caveats above.

Not the answer you're looking for? Browse other questions tagged electricity energy-efficiency light or ask your own question.

34
What’s the best strategy for turning off CFLs that will save energy but not reduce lifespan so much
21
What's the typical energy usage of automatic light switches?
25
What form of electrical lighting has the smallest energy-footprint?
12
How much energy does it take to create a single light bulb?
3
How much energy could we save if we all got up at sunrise
5
Which is more energy efficient, a washing machine express wash, or normal?
5
Energy requirements for sustainable food production system
2
How much energy would it cost to stabilize 2 tons of water at 70 degrees?
4
How much energy am I harvesting?