Ice blocks are harvested from frozen river in early January, then stored in underground cellars. When summer comes, the same district heating network is used for circulating cold water.

Ice blocks harvested in the manner of scenario #1 are transported by rail or ship to warmer climates.

summary: yes, and it has been done, and it needs to be big, to work

detail: it's all about the volume. Rate of loss of ice will be proportional to surface area. Amount of ice is volume. So loss as a proportion of volume decreases, as volume increases. Which all goes to say, that for seasonal storage of heat or coolth, your store needs to be very large, and very well insulated.

Ice houses, as they are called, have been around for centuries, and possibly millennia, starting in ancient Mesopotamia.

For more, see for example this article by M. Mahdavinejad & Kavan Javanrudi, "Assessment of Ancient Fridges: A Sustainable Method to Storage Ice in Hot-Arid Climates" - the image below is from the Image Archive of Tarbiat Modares University, via that paper. 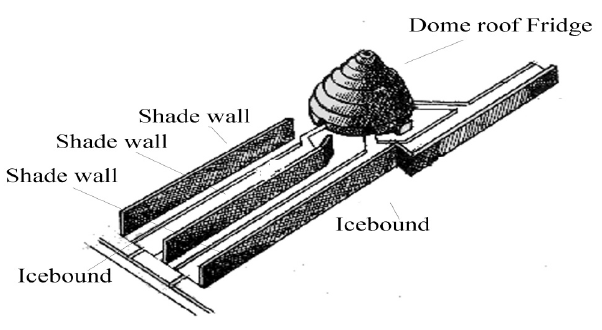 Beer factories in Germany used ice in cellars for their production throughout the year. A/C will require far more and may even heat up the cellars, so that more ice will be needed to bring them back to normal temperatures.

During WW2 there were some ideas to build landing strips on ice built as composite of coconut matting with ice, being transported to their operation area as a kind of raft. This construction was considered as being very stable and melting of ice should be reduced by insulation effect of the coconut mat.

So if thinking of transporting a huge volume of ice (e.g. from North Pole) to another place this could be an idea to follow. My idea would be to include pipes into the raft to extract the temperature continuously with brine. Well constructed the raft could be of multiple use.

It must be considered that most large cities with huge consumption of energy for air condition in summer are located close to the coast. Could become an interesting business.

Not the answer you're looking for? Browse other questions tagged air-conditioning or ask your own question.