Are there any self sustainable sanitation solutions for remote and underdeveloped areas?

My organization wants to install toilets and some kind of recycling method in remote underdeveloped areas. The installments should be suitable for hilly and mountainous terrain. Since the area we cover does not allow for regular maintenance by humans, we need a solution which is self sustaining. My question is, are there any sanitation and recycling solutions out there which can be installed in remote areas, are eco friendly and don't need human intervention to work? Are they expensive or affordable?

We are doing work in the Colombian Andes, and this is our current go-to solution.

The idea is to elevate the toilet, create a seal for insects, keep waste dry with sawdust, ash, lime, rice husk, or other dry product.

When the bin fills, remove it, seal it and date it with proper saftey equipment. We use long gloves and face masks. Place new bin for collection.

After two years, the bin can be emptied and its contents composted. This is the best way to get it back into the soil and growing plants. With the two years wait and composting, there is 'no' risk.

Your organization will need to teach people using these systems how to operate them. You may need to give them gloves. You need to show them how to compost the waste.

Once the community gets the rhythm, and the compost is replacing fertilizer costs, the overall costs and benefits of the project beat out any other sanitation option.

Composting toilets seem like the obvious solution. In warmer climates it's easy to have a hot compost that cycles fairly quickly, in colder climates you will likely need to heat it or accept a very slow cold cycle (which is risky because not all pathogens will be killed in a cold cycle).

The key is to mix in cellulose to help aerate the mix and even out the nitrogen (human poo has too much for most composting). That can be sawdust or woodchips, or you can buy mulch from a garden supply place. Once a container is full it needs time to compost down, so you need multiple containers. You also need a separate system for urine, as that will turn the bin anaerobic and it will stink and not compost properly.

In New Zealand the Department of Conservation(DOC) use commercially made composting toilets in some huts and camping areas, as do Tasmania's Parks and Wildlife in Australia. They're common enough that I've seen a variety of types and they're not remarkable enough to get special mentions that I can find. They're just there.

In the past I have used a passively ventilated DIY system that worked as well as the Excelet, but obviously without the necessary approvals it could only be our second toilet. That was literally just a bucket, 5cm of gravel in a bag made of plastic shadecloth to keep the compost out of the gravel (rather than proper geotextile), and a length of 25mm PVC pipe down the side of the bucket to let air into the bottom. When the bucket was full we emptied it into a black plastic bin at the bottom of the garden that was set up in a similar way (but bigger). That's messy, but not as messy as you might think. The top layer of the bucket is very fresh, but if you empty it with a fairly fast, smooth motion by the time that fresh stuff hits the bottom of the big bin there's a lot of partly-composted material falling on top of it so there's no splash or mess. We had two, 100 litre bins for a household of four people. We emptied a bin about every 6-9 months and a 20 litre bucket every week or so (the numbers don't add up mostly because we didn't completely fill the bucket, and the bin was composting so it would lose volume over time).

We now have an Excelet commercially made one because it's got all the paperwork and certifications to be the only toilet in the house, and we intend to move it into the granny flat we are building (as the only toilet). They say that even in Australia it's a good idea to keep the full bins in the sun so they get heated into the thermophilic zone above 40 degrees Celcius. In Sydney we get outside temperatures above 35 degrees quite regularly in the summer so it doesn't take much to get a black plastic bin over 40 degrees. 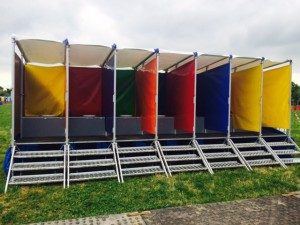 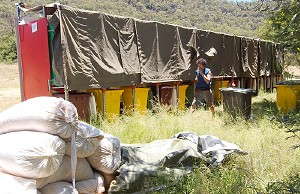 I've also worked at a music festival that used 220 litre wheelie bins as the toilets. They had separate urinals and pee-only stations, but the poo toilets were slightly elevated platforms with a toilet lid support directly over the bin, and a bucket of sawdust/wood shavings in each cubical. We had attendants explaining them and adding extra wood when needed. They also had a wire hook for getting things back out of the toilets. Those bins were taken out when full then just left in the sun for six months to a year with no further attention (AFAIK). After a year they were thoroughly composted, and then emptied onto a sifter rack so that all the rubbish people dump into them could be picked out before the compost was used on a farm. The guy has formed a company that does this!

Not the answer you're looking for? Browse other questions tagged recycling waste toilet or ask your own question.