The sustainability of Spotify

What are the arguments in favour and against using music streaming services such as Spotify in comparison to having music stored in a local folder and accessible offline?

Sustainability can refer to:

Summary: storing music locally most likely uses a bit less energy than streaming music, but it depends on things like if you replay the same song multiple times and if the music streaming service caches data on your device for reuse. You also need to consider how much of the used energy is green and here there are big differences between music streaming services.

I'd like to focus on energy use in my answer. You can listen to music with many different devices in different ways, but for simplicity let's focus on streaming music over the Internet versus buying and downloading an mp3 online. In this case you need to compare:

You can see that if you play a song only once then both situations are very much alike and the energy consumption is likely similar. However when you play the same song 10 times, then the buying and downloading of an mp3 still is done only once, so in this case the mp3 will use less energy.

This difference may not be much, as a streaming services like Spotify will cache data on your device, but suppose you replay a song a year later then your cache probably doesn't contain the song anymore and the entire song has to be re-transferred. When the song is still in the cache or you've downloaded it for off-line usage, playing the song will still result in a small amount of data being send to the service provider (to track usage information) but the energy consumption for this may be very small.

It's very difficult to come up with numbers to quantify the scenario above. This has to do with the many varying estimates for the energy consumption of downloading data on the Internet, but also with streaming music providers not making public how much energy their data centers actually consume. What we do know is that there are big differences between music providers in terms of renewable energy usage. Greenpeace investigates regularly how much clean energy big internet service providers use and publishes this in their yearly Clicking Clean report. Here are the clean energy percentages from their 2017 report (category music):

Let's take a closer look at Spotify as the leading music streaming service. Spotify scores relatively well because it uses Google's servers and Google is committed to making the transition to 100% renewables, just like Apple is. However the final score for Spotify from Greenpeace is a low 'D' because there is no indication whatsoever that Spotify cares about the environment. 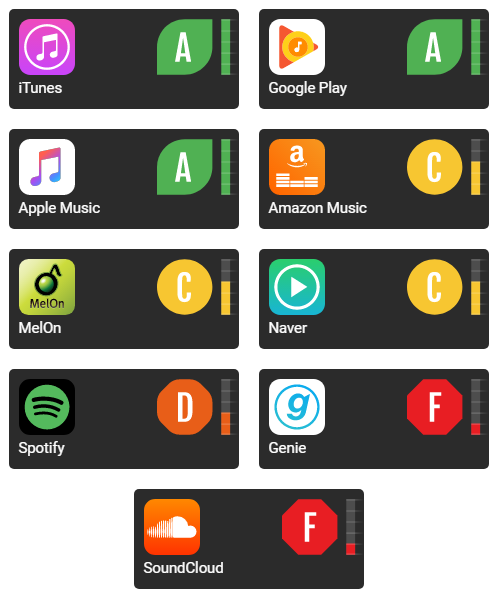 Not the answer you're looking for? Browse other questions tagged green-it internet or ask your own question.

19
What's the most sustainable way of hosting a domain?
18
What’s the carbon footprint of an email?
17
What's the carbon footprint of stackoverflow?
23
What can I do as a developer for the environment?
4
What are search engines with a focus on sustainability aspects?
9
What is the environmental cost of encrypting your communications?
2
Where to find the latest news on sustainability issues?
2
How much energy does it take to store 1 Terabyte of data in the cloud?
7
How to get the most out of computer hardware before it becomes obsolete?