In Professor Bugbee's presentation, he describes some drawbacks of vertical farming (VF) versus traditional horizontal agriculture. Most of Bugbee's arguments against VF hinge on grow lamp efficiency. In July of 2015, a step towards a 400lm/W monolithic white laser was announced. Laser lights are several times brighter than LEDs and use much less energy.

He illustrates a compelling argument as follows: 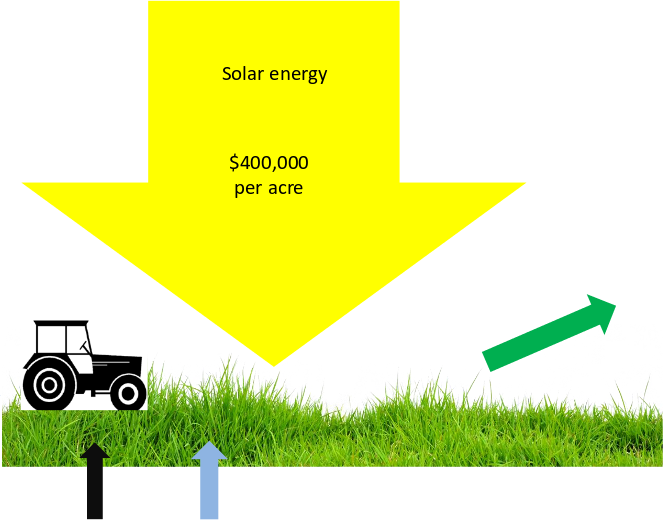 Bugbee's calculations with respect to his assumptions about photon energy conversion into biomass appear to be correct. Therefore his conclusion also seems to be correct: vertical farms are far less efficient than traditional agriculture (for growing tomatoes). This doesn't necessarily mean they aren't viable.

Given the assumptions above:

Note: While PAR is the preferred way to measure photon use by plants, it is onerous to convert PAR into the theoretical luminous efficiency of grow lamps.

Basically, barring compact fusion, can can we wholly replace (in time) traditional plant-based agriculture farming by growing indoors using technology? (For example, concentrated solar capture at 85%, batteries with 85% storage efficiency, 95% transmission efficiency, and highly-efficient grow lamps could be in the ballpark. I don't know, hence the question.)

Vertical Farming does already compete with horizontal farming. I read an article about a lettuce farm in Japan that was producing 10,000 head of lettuce a day. The research showed that the vertical farm not only used less water but it also produced more lettuce with less labour. Because LEDs have been designed specifically for this purpose by GE, the farm also uses a fraction of the energy a traditional horizontal farm uses in terms of machinery. I don't have the original article as I read it in a magazine while waiting in the doctors office, but here is a link to a similar article on the same farm and here is another link. Considering that this farm is now the largest producer of lettuce for the European market, I would assume it is not only sustainable but maybe for this particular product more efficient.

So yes artificial lighting can compete with horizontal agriculture. This is probably because although the sun is much brighter than any artificial light we can produce in a sustainable manner, it is not the brightness that matters but the frequency range of light produced.

Not the answer you're looking for? Browse other questions tagged energy energy-efficiency light vertical-gardening farming or ask your own question.

25
What form of electrical lighting has the smallest energy-footprint?
6
Indoor Urban Garden Lighting
31
What to do with old, unused incandescent light bulbs
4
How can I more effectively cool my house by managing windows with outdoor temperature changes?
5
Energy requirements for sustainable food production system
3
Can pumped water energy storage be combined with rainwater harvesting?
7
Anything similar to GravityLight that can be readily purchased?
3
Do light fixtures with small solar panels require direct sunlight?