Can pumped water energy storage be combined with rainwater harvesting?

A recent question on what to do with harvested rainwater got me thinking about pumped energy storage systems. Since both systems require storage of water for later use, is there a cost-effective way in which the two could be combined? Specifically in small-scale applications (farms, rural communities, campuses) where rooftops are already available for rainwater harvesting.

As background, pumped energy storage involves pumping water to an elevated storage reservoir when energy is cheap and plentiful (excess wind, low demand, unused solar, etc) then letting it run through a turbine to generate power at times of low supply.

Have any such systems been implemented? Could it be cost-effective, or would it simply over-complicate things?

Water loss is not the issue, because you need a lot of water to make it work at all. Even if your dams lose 30% of their water every year, that's about 0.1% per day. System losses in the best large-scale systems are about 20%. In other words, 70-80% efficiency of large scale systems (wikipedia). The big issue, though, is likely to be making it work at all. Conveniently that wikipedia article has a small-scale example: 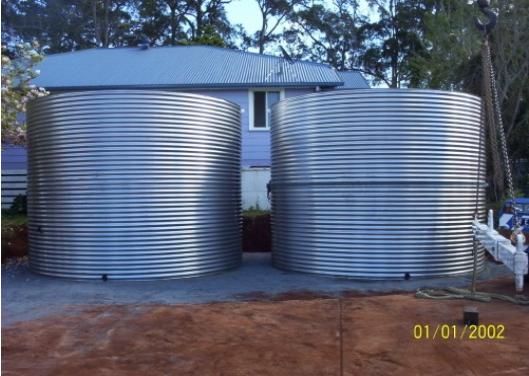 The other problem is getting an efficient pump that can push water from your bottom 40m³ dam to the top 40m³ dam. Amazon will sell you a 2kW pump capable of 3m/hr to 100m for $1500. Efficiency is not very high - that's 2kWh input for 0.8kWh stored (3x0.272kWh from above). To get from 40% efficient to 90% efficient is going to cost a lot more, and if you're not 90% efficient on the storing side, you're going to struggle to get 80% round-trip efficiency.

Note that you can trade head for volume linearly, but the efficiency of your pipes, pumps and turbines is crucial. The reason moderate head systems are preferred is that it's easier to get them up to the efficiency required. If you have 1000 metres, or 10 metres, of head, it becomes very difficult to make the system efficient. For example, most bore pumps with over 100m of head are simply multistage versions of lower-head pumps, so the efficiency drops even further. But flow turbines for low-head systems usually peak at 70%-80% efficient rather than the 90% you can get out of a pelton wheel: 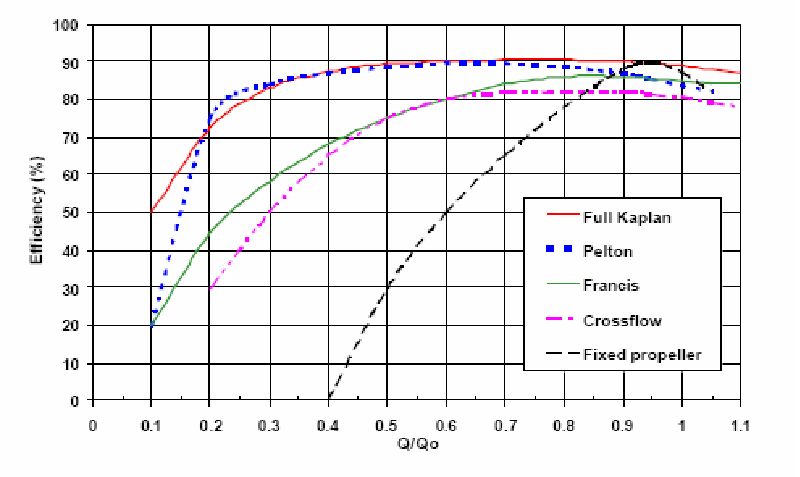 So this is not something you can do at all as an urban household, and it will be difficult for most rural landowners.

When I had a microhydro system on a property I owned, I had about 20 litres/second available but the head was over 100m because the block of land was steep (hence, cheap :)). The main limitation was my willingness to drag heavy pipe up a steep hill. Vehicle access to the top of the block was strictly "all wheel drive with winch" and took a whole day - that sort of terrain is brilliant for hydro, but steep land with high rainfall is a disaster for ground vehicles.

Because of the high rainfall, the "reservoir" at the top of that pipe was just an inlet filter anchored to bedrock using a cubic metre of concrete, there wasn't a dam per se, let alone storage. Getting the top anchor in place was over a months work for one man using machinery. Getting a tank like the one above to the top would have needed a helicopter. A big, expensive helicopter that would have had to come from a long way away. A dam would be easier, but still ridiculously difficult.

Not the answer you're looking for? Browse other questions tagged energy water water-management or ask your own question.

22
How should I collect and convert rain water into drinking water?
16
What's the average efficiency of pumped hydroelectric energy storage facilities?
2
Is it possible to convert rain drops to energy?
2
grid-based gravity assist power generaiton
4
How much electricity does 1,000 liters of water per meter of height fallen generate in various hydro generator arrangements?

23
Before drilling a well, how can I determine any water table impact?
16
What is worse: Wasting water or energy?
32
Which solar power technology has the highest energy return on investment (EROI aka EROEI)?
12
Cost-effective alternative to rechargeable batteries?
3
Is 3 phase electrical generation more efficient to utilize than single phase?
5
Toilet tank with both water main and waste water (underflow)
1
Could multiple ram pumps be used to fill a watertower for a pico hydroelectric system?
1
Renewable energy gravity storage