Types and quantities of air pollutants by fuel, per kWh, for electricity generation?

An often repeated claim is that transitioning from coal to natural gas reduces air pollution... but what pollutants? and by how much? how is the potential reduction calculated?

While natural gas (left) is roughly the same anywhere in the world, coal (right) is a very complicated compound (with chemical composition varying by type of coal, and location of deposit): 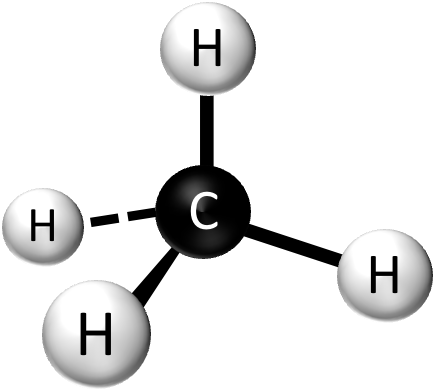 Then, for each fuel source, there are different combustion technologies, and different pollution controls applied to the exhaust.

My question is, for natural gas, and each of the four main types of coal (lignite, anthracite, bituminous, sub-bituminous):

I found this interesting research paper that answers some of your questions, at least for US power plants. For people who don't like to read research papers, there's an easier-to-read summary in this Science Daily article.

Sadly the paper does not mention the exact amounts of NOx and SO2, but it does say that

Also the paper provides a few graphs so you can get a rough estimate of the amounts of NOx and SO2. 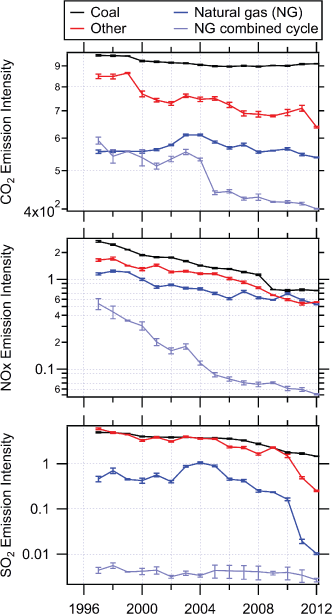 Average emission intensities (in units of g/kWh) of CO2, NOx, and SO2 from U.S. power plants between 1995 and 2012. Error bars give the 1-σ uncertainty in the averages.

Since methane is a very powerful greenhouse gas, leakages from gas production system could potentially negate the positive outcome of natural gas described above. In 2009 the EPA estimated that the leakage rate is 2.4% of the gross U.S. natural gas production (source). Other researchers think the real amount is much higher, but also say that:

system-wide leakage is unlikely to be large enough to negate climate benefits of coal-to-NG substitution (source).

Surprisingly the same article also mentions that natural gas used as a fuel in cars is most likely not cleaner than diesel.

Not the answer you're looking for? Browse other questions tagged electricity-generation pollution natural-gas or ask your own question.

4
Carbon footprint of CNG vs. Diesel as a vehicle fuel

7
Is using vegetable oil for electricity generation more efficient than burning whole plants?
2
How much does the methane content of natural gas vary, and what is the impact?