How is per capita energy consumption related to increasing per capita wealth?

Has there been any global calculation of average increase in consumption of energy per increase of wealth per person?

Has there been any such calculations/analyses. And could you perhaps tell us something more about them please.

Gerrit's answer answers from the perspective of time, and the entire world. I am going to answer by breaking down by country in the present, therefore we can see, at this current snapshot in time, the relationship between the richer and poorer.

I use energy consumption in GJ per capita per annum for 2013 from here.

I use IMF 2015 Per Capita GDP (at Purchasing Power Parity) from here.

I use the World Bank 2015 Per Capita GDP (at exchange rate) from here.

I used only the countries that data in all three charts. This does filter out a lot of the poorest countries in the world, especially the small ones. These countries are not present on the energy consumption chart, which could potentially skew the results. However, there are still plenty of poor countries left, and I think that makes for a valid sample.

This is the PPP graph. Linear fit is in blue, and quadratic fit is in red. 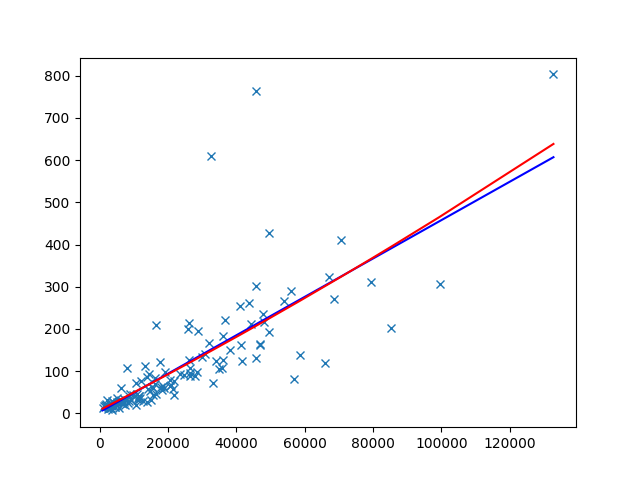 And this is the nominal graph: 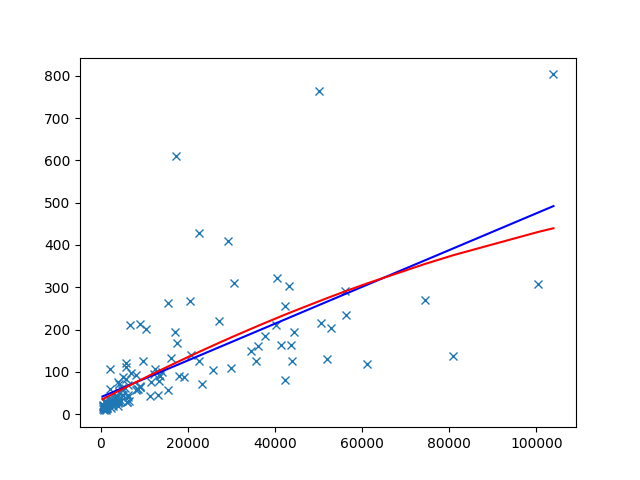 There are some significant outliers, places like Qatar, Luxembourg, Trinidad and Iceland with very high income or energy use (or both: Qatar is highest in both categories). These per capita statistics are distorted by low populations. Lets remove countries with less than 5 million people and see what is left. 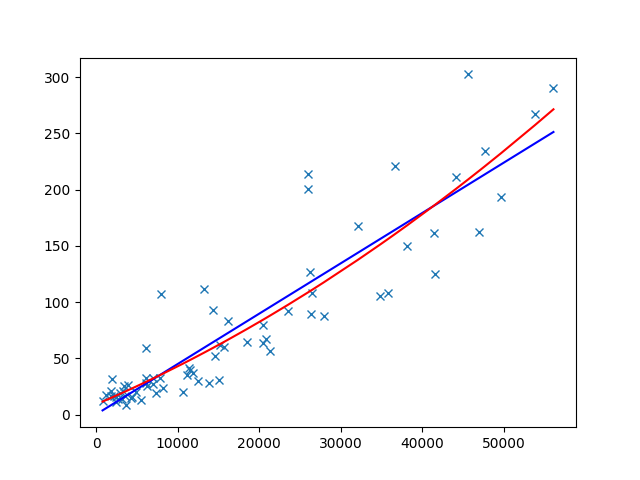 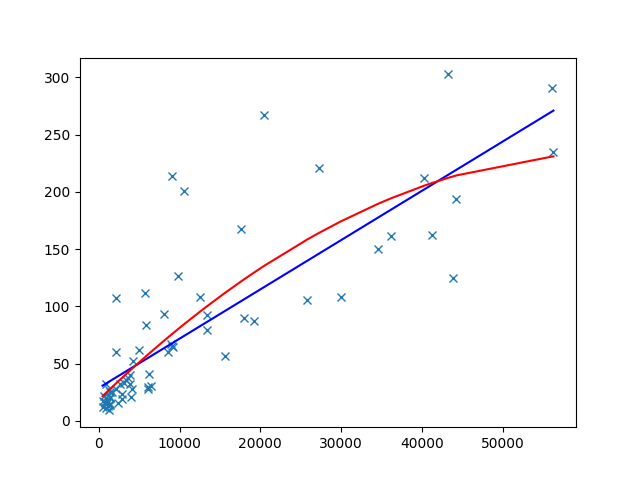 We're getting conflicting slopes, but in neither case are we very far from a linear relationship. Doing a little deeper digging with the data, there were two groups of outliers that were removed from the first set to the second set. The Gulf oil states and Scandanavian states were all removed for having small population (except Saudi Arabia). These countries generally had all the highest energy usage.

As I mentioned, energy usage would probably be more accurately modeled by two additional boolean variables beyond GDP: 'is this a petrostate' and 'is part of this country above the Arctic circle.' But as a fist pass analysis, I'd say that a linear relationship between GDP and energy usage is pretty well supported by the data.

According to research by physicist Timothy Garrett, who has used physical laws to model the economy, the ratio of power to wealth is not changing: 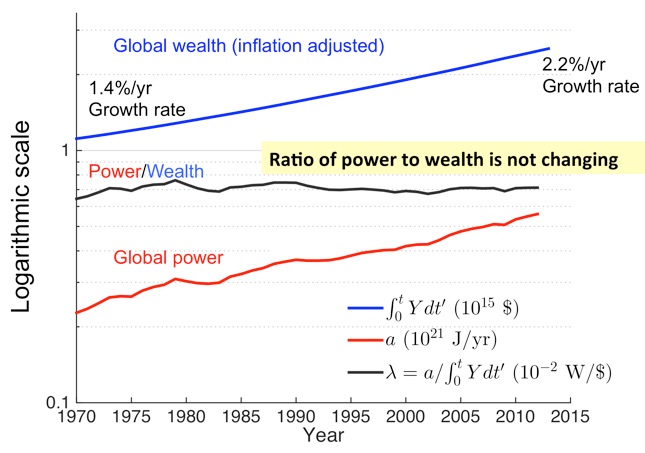 T. Garrett, a physicist, has authored several papers on the topic. See his list of peer-reviewed publications on this topic. At least one of them has a public peer review; as you can see, his study triggers a lot of discussion, perhaps because he is not formally trained as an economist. If you have some time his articles and the responses make an interesting read.

Note that he is not particularly optimistic:

If civilization does not collapse quickly this century, then CO2 levels will likely end up exceeding 1000 ppmv; but, if CO2 levels rise by this much, then the risk is that civilization will gradually tend towards collapse.

Not the answer you're looking for? Browse other questions tagged energy economy or ask your own question.

12
Are there projects that use renewable energy sources to create renewable energy sources?
19
Meat or fish, which requires more energy to produce?
26
What form of electrical lighting has the smallest energy-footprint?
7
What does it take to create an approbation label?
11
Could global shift toward vegetarianism be a big step in solving food, water, health, ecological, and economical crises?
7
What is the carbon footprint of energy transfer across power lines?
3
Can pumped water energy storage be combined with rainwater harvesting?
4
Could hotels charge guests for the utilities they use to encourage conservation?
3
Costs of transportation
3
Will a warmer climate reduce energy demand and increase solar PV production?