What is an efficient Atmospheric Water Generator?

I would like to build or purchase an Atmospheric Water Generator, using as simple and energy efficient technology.

For an "energy efficient" system, it would probably be hard to find a better summary than The Wikipedia 'Air Well' page that EnergyNumbers referenced. This provides an excellent and extensive discussion of many alternatives and trials. The large structures at the top of the article are only one attempted system. Modern versions of this are much less massive. Reading the whole article is advised.

There are numerous radiative condensers in operation - and the large size of some suggests that they have been chosen as the most cost effective solution by people in 'real world' situations. "Best" will depend of geography and topology - dew formation is generally considered essential to operation even though the Dyson award system does not seem to suggest this.

If you are willing to use an "active" system then you can use cooling with counterflow heat recovery. A Stirling cycle cooler is liable to provide best energy efficiency as the cooling source. More on this in due course maybe ... .

For a given RH there is a "dew point" temperature which the air must be cooled below in order for water to be condensed. ie Any system that works by condensation must cool the air to below it's current dew point.

Atmospheric pressure also plays a part and dewpoint temperature is affected by altitude.

This chart shows the percentage of water in air at the dew point at sea level at various temperatures. From here - Wikipedia: Dewpoint - 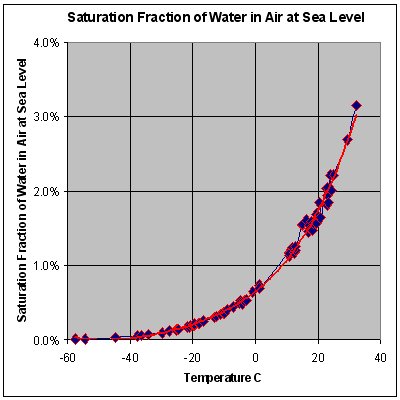 A 550 square metre radiative condenser built near ground level in north-west India experiences dew conditions dew for 8 months a year and the installation collects about 15 millimetres (0.59 in) of dew water over the season with nearly 100 dew-nights. In a year it provides a total of about 9,000 litres (2,000 imp gal; 2,400 US gal) of potable water for the school which owns and operates the site. [This text is based on Wikipedia text that I have edited for appropriateness and content. Source from above referenced page.]

How to STOP windows condensing - do this in reverse :-)

Not the answer you're looking for? Browse other questions tagged water or ask your own question.