How much, if any, does resolution effect the net power consumption of watching online video?

I watch a lot of online video. I'd assume that for example videos on Youtube in 720p use less power than the same videos in 1080p. I think this might be because:

However, I have nothing to back up my theory. I've heard the most likely incorrect rumour that one Google search uses the equivalent of boiling one litre of water, so I'm guessing it might be significant.

Is there a difference? How much?

The Natural Resources Defense Council commissioned a study in late 2015 to understand the energy consumption from 4K TVs, titled The Big Picture: Ultra High-Definition Televisions Could Add $1 Billion to Viewers' Annual Electric Bills. While this doesn't exactly answer your question as regards the resolution of You-Tube videos, it gives some solid clues.

First of all, the study finds that "UHD televisions use an average of 30 percent more power than HD televisions of a similar size." This finding is illustrated in Figure 9 from the report: 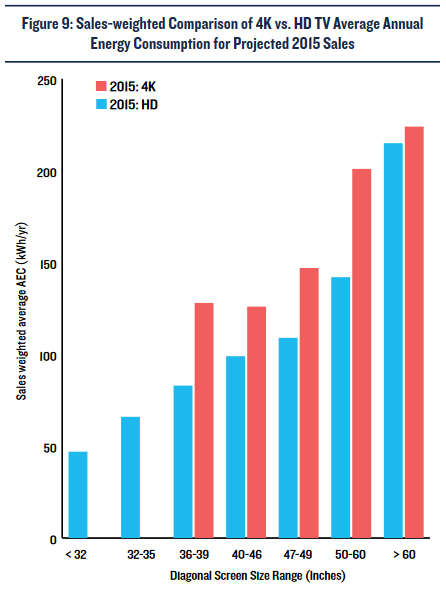 So this means that if you have an HD or UHD capable screen, you are likely using more power than a screen which is not capable of showing higher resolution video.

Next, the authors compared energy consumption on the same TVs for HD vs 4K content: "Feeding a 4K television, a higher-resolution (4K) version of HD video material did tend to increase energy use by an average of 10 percent, but there were large differences between models." Figure 16 illustrates this: 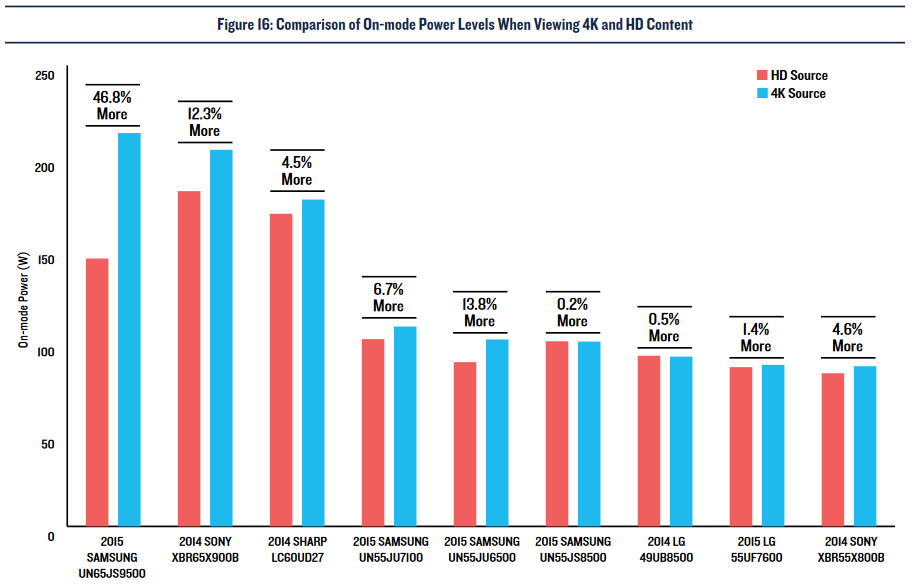 Thus, it seems that when you are viewing higher resolution video you will indeed be consuming more energy, but the exact difference varies significantly by model.

Finally, the authors find a bit of a silver lining: "Meanwhile, streaming higher-resolution content via the Internet instead of playing it from a disc did not make a significant difference in energy use, which is good news as people increasingly stream content over the Internet."

Not the answer you're looking for? Browse other questions tagged energy-efficiency electricity carbon-footprint alternatives internet or ask your own question.

10
How much CO2 do I cause with one Google search?

6
How much power does an Electric Airpot use while on standby?
15
How much power does a computer monitor left switched on use?
6
How much firewood does it take to produce the equivalent of 1kWh of electrical heating?
7
How much gas does it take to heat water from 15 to 60 degrees C?
5
How much energy does it take to store 1 Terabyte of data in the cloud?
3
What's the carbon footprint of watching IPTV?
7
How much CO2 does a plane produce per additional kg of weight?
2
How does the EPA estimate annual power consumption for refrigerators?
1
Why do the best energy star freezers have higher capacity and lower rated power consumption than the best refrigerators?
4
Any way for microinverter PV array to power a house when the grid is down?