Are there any bright candelabra base LED bulbs equivalent to a 60-75 Watt incandescent?

My fan takes 3 candelabra (E12) base bulbs; I traditionally use incandescent flame tips, but since they're behind frosted glass, I don't really care.

Having just replaced my dimm-able recessed light with Utilitech dimm-able LEDs, and being quite pleased with the results, I want to do the same to this fan. Unfortunately, I can't find bulbs with equivalent brightness.

The light is currently dimm-able, and the bulb slots say 75W - 125V. Since I can't even get 75W incandescent bulbs anymore, I thought I'd find some appropriate LED or (less-preferably) fluorescent bulbs.

Note: at the recommendation of the moderators here at Sustainable Living, I've replicated this question at DIY Stack Exchange.

If you can't buy a specific bub that fits and you don't mind a slightly strange appearance then almost any mains powered dimmable LED bulb that fits and has the correct wattage (that narrow the field :-) ). could have a modifed base added by a competent technician or engineer. Be careful re "dimmable" - some LED bulbs are, some aren't. Some can use standard phase control dimmers, while others can be dimmed only by using a custom control unit.

When replacing a 75 Watt incandescent you need ABOUT 10 - 15 Watts of LED power input to produce the same total light output (lumens), but as the LED light is well directed in this application, the directionality of the LEDs compared to incandescent bulbs means that you would probably be happy with 5 to 10 Watts of total LED power. As LED lumen/Watt efficiency is going up continually, even 5 Watts can be "very very bright" in many applications. (An incandesecnt bulb may produce 15 lumen/Watt. Good modern LEDs give in excess of 120 l/W and last time I checked the top available-to-buy offering from Cree was managig 200 l/W in some very specific circumstances.). Whole lamp l/W will be less than for the LEDs alone due to diffusers, reflectors, power supply losses and stupid designs, but approaching 100 l/W is common enough and higher is becoming available.

The most basic but easiest method would be to start with LEDs and suitable heat sink mountings and use an external power supply fed through the existing wiring. This would allow the lamp to be very close to standard in appearance but involves non standard playing at the other end of the wiring.

Closest to 'plug in and go" (apart from a correctly fitting lamp) is any of the many many LED lamps now available that meets your spec as above, some bases from old bulbs , some suitable adhesive and time skill and patience. With the correct LED lamp it's literally just a matter of connecting the 2 existing wires to the 2 wires from the bulb.

An important factor in many cases is the LED lamp's CRI (Colour Rendering Index). This is a subjective measurement based on a number of colour samples which tells you how well the LED renders the colours of various items compared to a standard tungsten filament incandescent lamp. A tugsten lamp is defined as having a CRI of 100 and LEds can approach that when great care is taken. Not surprisingly, Philips are among the leaders in making high CRI LED lamps.

Hand in hand with CRI is CCT (correlated colo[u]r temperature - but if you get the CRI that you want then CCT will follow. CCT is expressed in degrees Kelvin (same size degree steps as Celsius but starting at absolute zero of = -273 C.) Tungsten has a CCT of about 2900 K, Halogen 3200K, sunlight 5600 K, shade about 7500K. To get a CRI of near 100, CCT will be around 2800K. A CCT of about 6000K is getting down to a CRI of about 70. I personally prefer light of about 6000-7000 K to that of tungsten - slightly on the shady side of noon sunlight. Some love the horrible orange yukky look of tungsten bulbs :-).

and perhaps a few more independently PLUS all their cross licencees.
If in doubt, buy Philips in one of its guises.

Full disclosure: I have no financial interest in Philips or any other LED maker (sadly). I'm just impressed over the decades wity how well Philips does its stuff.

From Wikipedia - color temperature
Anywhere on the black curved line (The "Plankian locus") is seen by the eye as white !!!
CCTs are shown on the curved line. Daylight at midday is about central and tungsten is towards the yukky orange end :-). 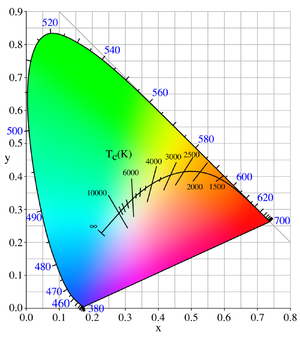 There are now 60 watt equivalent LED candelabra bulbs available, which use only 7 watts. I bought 12 of them and they are working awesome.

I'd been looking for a 60W equivalent candelabra base bulb for a while too. For the past few years the highest equivalent available to consumers was 40W. Now it looks like the 60's are finally making their way to market. This one claims 700 lumens which, if true, would be very close to the brightness of a 60W incandescent.

A replacement "ceiling fan light kit" costs $25-$40 at your local hardware store and you can install it in 30 minutes.

These bulbs are 60 watt equivalent and they work great in my ceiling fan. The color temperature is 5000k daylight and this is exactly what I needed for my dining room area, because I work on on my computer there, so I need brightness and clarity of light: http://www.candelabrabulb.com/60-watt-led-candelabra-bulbs-5000k/

Not the answer you're looking for? Browse other questions tagged light or ask your own question.

25
What form of electrical lighting has the smallest energy-footprint?
17
Are incandescent light bulbs recyclable?
5
Why are my LED light bulbs so short lived?