How can we all together clean up the vast plastic carpets in our oceans? [closed]

Want to improve this question? Update the question so it focuses on one problem only by editing this post.

It is mind-boggling to me that there is still so much plastic out in our oceans, floating around for years and ever growing and nothing is being done about it. Governments should work together, companies should pool efforts! We all, as human kind, should get together and clean it up.

I do not have a solution, only know it needs to be done urgently. There are many clean-ups along shore lines, which I know of. I live on the shore as well and clean up whenever the tide washes waste from the ocean in. But this is not enough.

If you know of any clean up efforts out on the ocean, anything big scale, I would be very glad to hear about. I would so much like to support such efforts.

The plastic dilutes into our food chain and kills wild life. This needs to stop. Maybe we can come up with a good plan together here...I know this is a big question to ask but it has to start somewhere.

Prevalence of garbage in the oceans

Our model, calibrated with data from multi-vessel and aircraft surveys, predicted at least 79 (45–129) thousand tonnes of ocean plastic are floating inside an area of 1.6 million km2; a figure four to sixteen times higher than previously reported. We explain this difference through the use of more robust methods to quantify larger debris... Finally, our results suggest that ocean plastic pollution within the [Great Pacific Garbage Patch] is increasing exponentially and at a faster rate than in surrounding waters.

[The study doesn't address them, but there's also an Indian Ocean Garbage Patch and a North Atlantic Garbage Patch. Depending on how you define "garbage patch," there are also corresponding patches in the South Pacific and South Atlantic.]

The study has been generating a fair bit of press, in part due to the fact that the work was supported by, and much of the data was provided by, The Ocean Cleanup. From their website:

The Ocean Cleanup is a non-profit organization, developing advanced technologies to rid the world’s oceans of plastic. By utilizing the ocean currents to our advantage, our passive drifting systems are estimated to clean up half the Great Pacific Garbage Patch in 5 years’ time.

The "passive drifting systems" are comprised of U-shaped floating booms up to two kilometers in length with weighted screens below them. In theory, as ocean currents carry the heavy booms, lighter pieces of garbage are trapped against the screen and drift toward the center of the U, where they accumulate and can easily be collected by ships.

I say "in theory" because tests have so far been under-whelming. A 100-meter prototype less than 20km offshore in the North Sea lasted less than two months. Other critics (KCET.org, The Guardian, Sciencemag) have voiced concerns that the boom system will not effectively capture garbage, harm sea life, and ultimately break apart, causing an increase in marine litter.

One of the critics of the Ocean Cleanup is the 5 Gyres Institute. 5 Gyres focuses on original research, education, and citizen involvement. Their research on microbeads lead to environmental regulations in the U.S. From the FAQ:

During a 2012 5 Gyres expedition, we found plastic microbeads—tiny round microplastics used in personal care products—in the Great Lakes in an open-water setting. That research started a movement, which culminated in President Obama signing the Microbead Free Waters Act in 2015. The law will go into effect in 2018.

5Gyres research and advocacy has driven coalitions of communities and organizations that focus on reducing the amount of pollution flowing into the oceans, understanding the impact of pollution, and educating citizens and decision-makers on those impacts and how behaviors and regulations can be changed to reduce it.

While the large-scale technological approach of the Ocean Cleanup is really attractive, ultimately it seems that financially supporting 5 Gyres would be more beneficial, as their methods have a broader foundation of research, and a history of effectively driving regulatory changes.

And if you're not able to contribute financially, 5 Gyres provides a list of 10 different ways you can take action immediately to reduce the pollution that goes into the oceans: 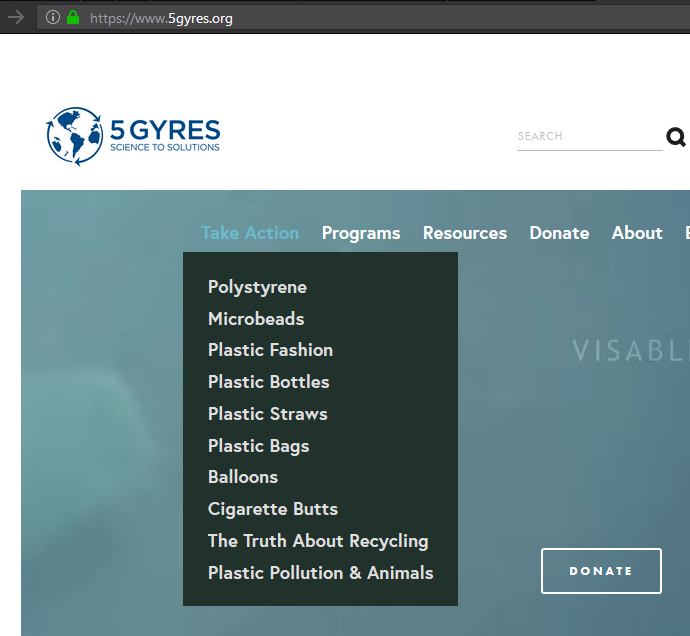 Note: I have no ties to either organization.

Not the answer you're looking for? Browse other questions tagged water waste environmental-impact pollution or ask your own question.

7
How "clean" is this Ohio State clean coal technology?
9
How can I measure the moisture content of my firewood to ensure good efficiency and clean burning?
7
Is the Air Conditioner water clean and hygienic if I want to collect and reuse the water?
8
How can I clean old cooking oil for use in candles?
4
What is the average net impact of a human on the sustainability of our habitat?
11
How do plastic bags and other waste end up in the ocean?
3
What's the impact of throwing plastic in the bin?
7
How do I dispose trash without using plastic bags?
3
How do I clean my avocado oil intermediate bulk container so I can store water in it?
2
How to reduce the environmental impact of drinks containers