In the spirit of this question about paper towels vs electric dryers, which types of faucets are most sustainable?

The marketing reasons for using motion-activated faucets are that they reduce water usage, and since they don't need to be touched, require less time and chemicals for cleaning.

However, they do require electricity and motors, and when (as often happens) the motion activation part isn't working well, people touch them anyway (or hit them, grab them, squeeze them, etc, as they grow more and more frustrated (not that I would know anything about that...)).

It seems like something with a bumper (like many drinking fountains) or a foot pedal would offer the best of both worlds.

I don't think there is a clear answer to this question.

In a public environment where there is the risk of someone leaving the water running, then almost certainly yes. In a household where people can be taught and trusted to use water respectfully, especially hot water, then probably no, because the negligible resources saved is likely to be offset by the need for batteries or mains power. There is also the issue of complex equipment like this being more likely to fail than a standard tap, and less likely to be repairable. I'm a strong believer in KISS when it comes to issues of sustainability.

Motion activated taps do have other advantages though, in terms of hygiene and ease of use for some with certain disabilities.

I was looking into this question for a project at work and found some research studies addressing water savings from automated faucets.

Though a bit old, this is perhaps the most comprehensive and detailed study. It was conducted at the Millennium Dome, an exhibit in London open for the year 2000 to celebrate the beginning of the new millennium. Over six million people visited the dome over the year it was open.

Part of the exhibit included six identical restroom facilities ("cores"), with various evaluation technologies installed to reduce water usage. Data collection was detailed and precise, accounting for both volume and manner of use of the restrooms:

Water use by the different appliances in the various cores was monitored via 150 discrete meters, which recorded the use of hot, cold and reclaimed water by visitors to the washrooms. Each washroom was also equipped with an infra-red detector at the entrance, which recorded the specific number of visitors to each particular washroom. [...] Using this data, combined with a correction coefficient, it was possible to calculate the water consumption of each visitor to the washroom for each particular appliance. The correction coefficient was applied to take account of the fact that not all visitors to the washrooms used all of the appliances [...] The correction coefficient was calculated via a series of visual surveys, where [...] researchers undertook detailed observations in the male and female washrooms over several hours.

Three types of tap were evaluated during the research, infra-red activated (48 in total), push-top (96 in total) and conventional swivel top (96 in total). Surprisingly over the year the conventional swivel top taps used significantly less water than the purported more efficient types, with each user of the swivel top taps using, on average, just less than 1 litre of water. Assuming that users could deliver the optimal amount for their hand-washing needs from the manually operated swivel top taps the optimal value for a single hand wash would appear to be approximately 0.9 litre per use. 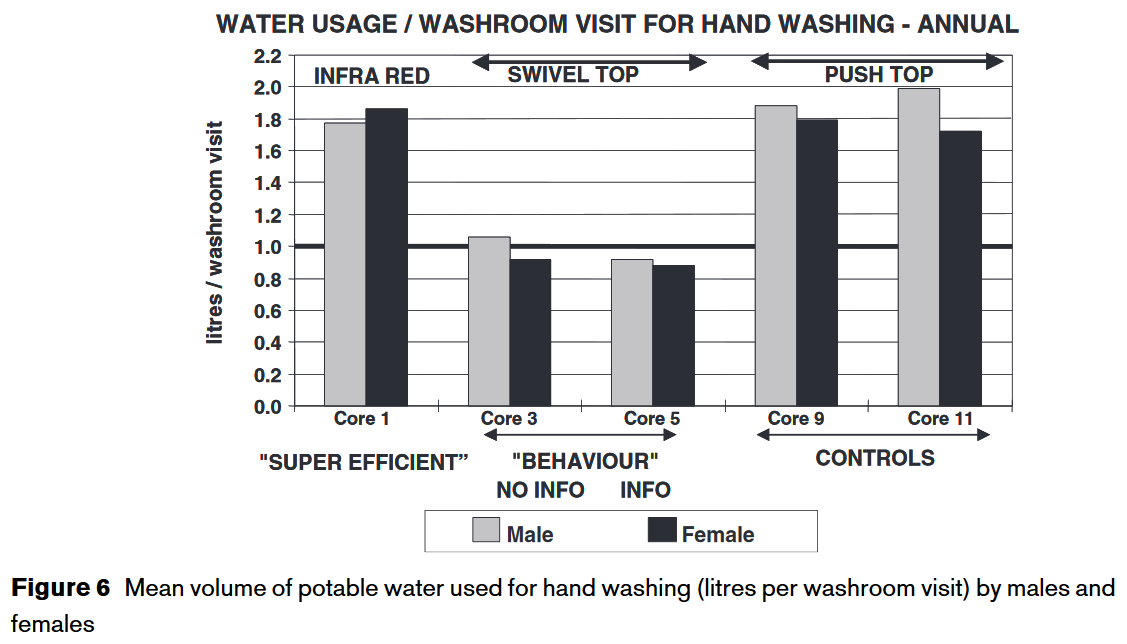 This study documents implementation of a solar photovoltaic water heating system at the visitor center at Great Smoky Mountains National Park in Tennessee, USA. After installing the system, the authors tested several scenarios (called "Configurations" in the paper) to determine how best to reduce water and energy usage for the total system. The study ran from November 1996 to February 2000, with each individual configuration scheduled to run for one year.

Questioning whether users tend to run the water more than is needed, the project leaders decided to try automatic faucets. The aerators on the new faucets had the same nominal flow rating, 8.3 [Liters per min (2.2 gallons per minute)], as the aerators used for Configuration II. Automatic faucets offer the trade-off of potentially shorter draw times versus always operating at maximum flow. No throttling is provided as with a manual faucet. The water volume and energy usage results for Configuration III were poorer than for the two previous hot water configurations. Using the common interval of November to February as the basis for comparison, the average daily hot water volume increased 58% (372 Liter/day to 586 L/day). The average daily AC energy requirement increased to 12.85 kWh/day, as compared to 8.49 and 8.85 kWh/day for Configuration I and II, respectively.

As a mitigating factor, the authors do note that attendance during this time period represented an increase of 22% compared to the baseline. However, this is not sufficient to explain the increased water and energy usage.

These results were so bad that ultimately the team decided to uninstall the automated faucets after less than five months of the proposed one year test.

This paper describes field testing of automated faucets (as well as automated flush valves) on one floor of an office building in Tampa, Florida USA. Measurements were recorded using a water meter recording all water usage in all bathrooms on the floor. No adjustments were made for seasonality, occupancy, or building schedule.

[P]re-monitoring of the existing fixtures [...] was conducted from February 2007 until January 2008. The average daily water demands during this period was 654 gallons per day. [...] The existing faucets in the mens’ and ladies’ washrooms were [...] replaced with new sensor-operated faucets on January 29, 2008. [...] The average flow rate of the manual faucets was measured as 1.32 gallons per minute (with the valve fully open) and the average flow rate of the sensor faucets was slightly less at 1.21 gallons per minute (valve fully open). Water demands were monitored for the 127-day period from the date of installation until June 4, 2008. The average daily water demand of the washrooms during this period was 856 gallons per day – an increase of 202 gallons or 30% per day.

The units themselves aren't terribly complex. The valves use the pressure of the water to open and shut. There is a small solenoid with a mechanism similar to a retractable ball point pen. One surge of power, clicks open, second surge, clicks shut. The rest is a simple motion detector. For a sink this is just a photocell that measures the light reflected off the sink bowl. When the light drops the circuit runs the solenoid.

There are variations in design. May run for X seconds. May run for Y seconds after the light returns to normal. May have a max of Z seconds.

So the next question: Do they save water? A faucet with an aerator screen (makes the volume seem greater) runs about 2 liters a minute -- a cup every 5-8 seconds. Most bathroom hand washers are really hand rinsers, and only run the tap for a few seconds. Probably a large fraction use under 1/2 cup about 1/8 of a liter.

Payback: Another post mentions buying used ones for 60 bucks. Used plumbing at our local habitat for humanity Re-store tends to run 1/3 to 1/2 of new costs. Suppose a new one was $300. If water is scarce you may be paying as much as $5/cubic meter, or .5 c/liter (For comparison, my cost is about 10 c/cubic meter) Suppose that motion activated cuts water usage in half, to 1/16 of a liter. 32 handwashes per liter saved. 32,000 hand washes per cubic meter, 192,000 hand washes to pay for the faucet. If they have a 5 year life span, that's under 40,000 per year, about 5 per hour in a 24 hour facility, like an airport.

If water is cheaper (likely) the payoff is longer.

Compare this to the 1 gallon (4 liters) used to flush a toilet, or the 1 liter to flush a urinal, this is small usage. Add to that some large fraction of people don't wash their hands.

From a sustainability standpoint this is NOT low hanging fruit. Automated urinals that were smart enough to flush only every 3-4th usage if urine was close to clear would save more water. Or a system that used a mist to rinse down the sides of the urinal. Or a downdraft air current that whisked away the stink using no water.

Motion activated faucets have other merits: Conventionally, people with soiled hands are turning the faucet on, washing their hands, then turning the faucet off, recontaminating their fingers. More significantly, they are doing so with not just their germs, but with strangers germs. It may actually be safer to NOT wash your hands -- you are likely used to your own germs, and contacting people with only one set instead of 50 sets may be safer for them too.

15
Should I dry my hands with paper towels or a dryer?

15
Is drip irrigation more water-efficient than conventional watering?
16
Are there any more sustainable alternatives to conventional commercial toothpaste?
4
What are the most sustainable options for filtering tap water for drinking?