Thus it appears trees far more productive than wind turbines. Is this true? Are these assumptions correct?

Wind turbines do not turn the ground between them into desert. There is still farming and growth of various plants (even trees) possible. It should not be excluded in those comparisons and calculations.

A wind turbine with 3MW power, rotor diameter of 100 meters rotating at a hub hight of 100 meters may allow growing plants with a height up to 25 meters (~ 80 ft).

A tree farm of that size in a temperate climate would only produce ~1.7GWh/y (net). You are overestimating the productive value of trees by a factor of ~15.

A 5MW wind turbine can produce a maximum of ~44GWh a year. Your assumed figure of 1GWh is only 2.3% of its rated capacity. No-one would bother financing/building a turbine on that site if they could only harness 2.3% of the maximum energy possible. The average load factor of on-shore wind turbines in Denmark over a 20-year period was ~21%, so based on those, you are underestimating the productive value of wind turbines by a factor of ~9.

The question posed in the title itself is interesting — if a bit vague — so I'll refine the question a bit and present an answer to that based on some real-world numbers and more credible assumptions...

"Under what conditions are trees more productive than wind turbines?"

Deciduous temperate forests have a net primary productivity of ~0.0186 kWh/m²/day. That translates to ~0.775W/m². (Refer to postscript for source and explanation.)

Turbines need to be separated by 3-10x their sweep diameters for a variety of reasons (flow interference being the main one). Given that site details are unknown, let's use the average of 6.5x.

Using a more realistic generator efficiency (65%) and coefficient of performance (0.35) means that an average wind-speed of 6.4ms⁻¹ (~23kmh⁻¹) is required.

So, in short, assuming your climate is temperate, and your site is 'average':

Note: A 6.4ms⁻¹ average wind-speed is quite windy and only occurs in a limited number of places: 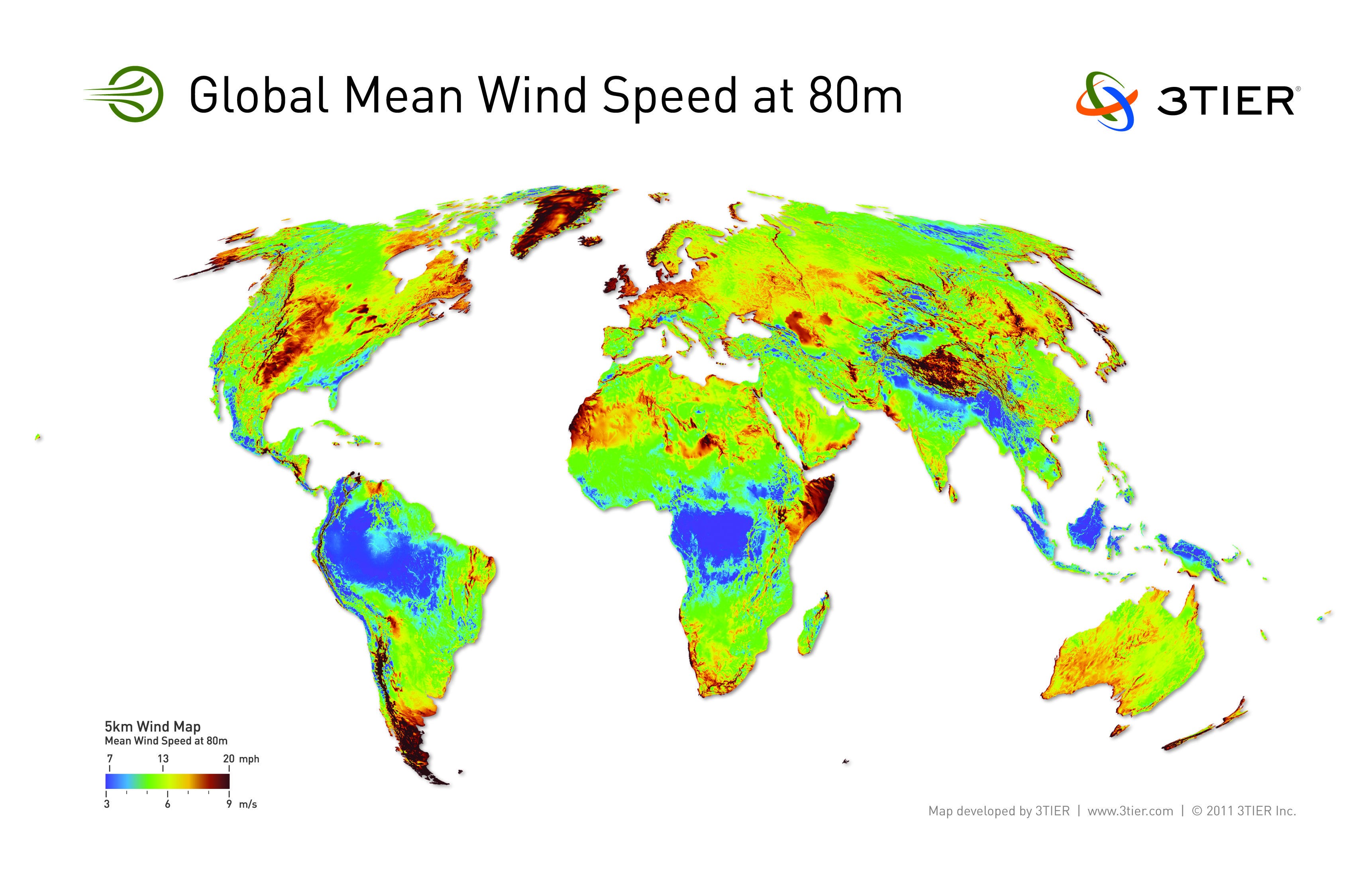 PS: You can look up the Mean NPP of various ecosystems here. Convert from grams to Joules by multiplying by ~20,000 (for deciduous hardwoods). Then divide by 31,556,952 to convert J/yr to Watts. Example: Temperate Deciduous Forests have a NPP of 1200g/m²/yr. 1200 * 20000 / 31556952 = 0.76W/m². It's possible to get more accurate numbers if you know the mix of species and the latitude, or if you have access to journals behind paywalls, but for general use you can just use the Wikipedia numbers for a satisfactory approximation.

The question assumes a false dichotomy: Trees or turbines. The actual turbine footprint is small, leaving most of the land available for other purposes.

In rolling country, siting turbines on ridges and using valleys for some other function makes sense.

If the tradeoff is to grow biomass for fuel use, you have a whole bunch of other considerations. The bugbears of biomass use for fuel in temperate climates are harvest, transport, and seasonal storage. Efficiency of the biomass to electricity is a problem too.

The uses don't have to be exclusive: One prominent biofuel candidate is switch grass. Because it doesn't get tree tall, it can be grown right up to the tower right of way. It also has advantages that many farmers already have the equipment to harvest and package (bale) it.

If the terrain is rougher, then space between turbines can be used for pasture.

4
Is there a simple on-line tool for estimating wind turbine power output?

15
How can I determine whether roof top wind turbines would be beneficial in my area?
3
What are the biggest supply-side logistical constraints on the expansion of offshore wind?
7
What are the physical limits on wind turbine size?
4
Is there a recent study that shows how accurate wind turbine wake models are?
7
How are readings from the wind sensors mounted on wind turbines influenced by the blades' wakes?
7
Is using vegetable oil for electricity generation more efficient than burning whole plants?
3
What is the wind wake effect and why is important for wind turbines?
4
How much land needed to dispose of blades from wind turbines?
1
When does wind make more sense than solar for a home application?