Should storm windows be left open in the summer to reduce hothouse heat gain?

During the summer is it more desirable to have storm windows open, partially open, or closed?

I have old wooden, single-pane windows with aluminum storm windows and I have installed energy film on the windows. There is some draft if I do not weather seal properly each winter season.

Is the loss from drafts greater than the miniature hothouse heat gain from conduction through the single pane glass?

I have a central air unit properly sized for my home. Usually keep it at 26C and it usually kept at this temperature since my wife works from home.

I live at approximately 38N in the central mid-western US, with the seasonal highs of between 29C and 33C.

~15% of the southern face of the house has glazing and is subjected to constant sunlight after about noon. One window is constantly shaded.

Keeping your storm windows closed in the summer will result in net energy savings due to reduced ventilation.

EDIT: model updated to eliminate cooling load during the winter.

Using eQUEST, a building energy simulation software based on research from the U.S. Department of Energy, I built a simple model of a roughly 500 m2, two-story home with 15% glass on the southern (equator-facing) side:

I then modeled three different changes caused by closing the storm windows to see how they affected total energy use for space cooling and space heating:

Here's the resulting effect on energy use for cooling: 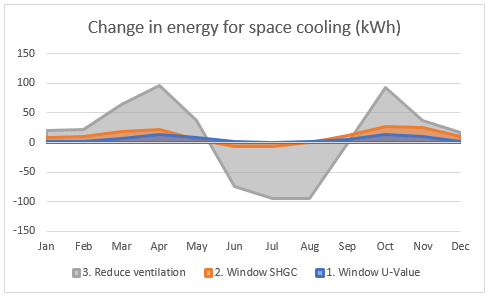 Note that the measures are cumulative, so the final measure (in gray) includes the effects from the first two.

During the summer, the reduced ventilation reduces the need for the AC. The interesting thing is that in the shoulder seasons (particularly April and October), this increases the need for AC. Thus during the spring and fall it makes sense to open the windows in the morning and evening when the ambient air is cool.

And the same chart for heating: 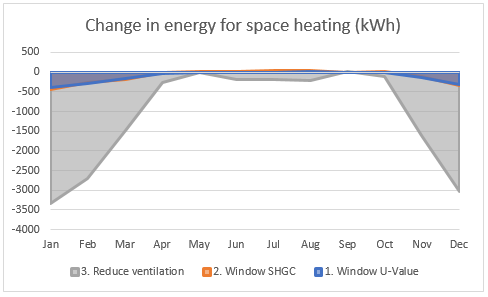 Here all three measures result in energy savings, as you'd expect. Note that the scale here is an order of magnitude larger -- meaning that keeping the storm windows closed saves a bit of energy in the summer, and a lot of energy in the winter.

Of course, as the saying goes, all models are wrong, but some are useful. Your best bet would be to test this yourself over a period of a few days, if you've got access to look at your electric meter reading periodically.

Not the answer you're looking for? Browse other questions tagged air-conditioning or ask your own question.

1
What is the difference between Geothermal HVAC and Heat pump?
9
Heat Pump vs Air Exchanger, What's the difference?
6
Temperature equalisation throughout the house
10
What is the actual efficiency of an air to air heat pump in the winter
2
How to reduce indoor humidity in the summer time?