What is the maximum sustainable population of the earth?

This question prompted by discussion regarding this answer to a question about vegetarianism.

I recently came across a U.N. review of studies seeking to determine the earth's maximum sustainable human population: "One Planet, How Many People? A Review of Earth’s Carrying Capacity".

The review itself is from 2012, when the world's population was 7.1 billion. The population today is around 7.5 billion. The range of estimates reviewed goes from 2 billion to 1 trillion(?!): 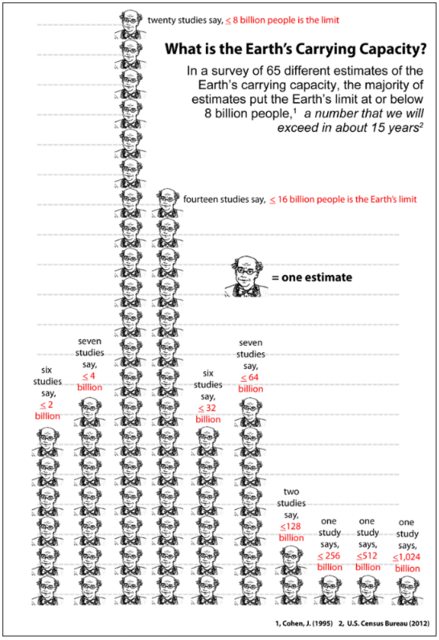 Conveniently, most studies put the limit at 8 billion, a number just below the present population.

In the six years since this review, has a more robust, consensus-driven method been developed to determine the limit? What limit has been determined?

I'm interested both in the estimate itself, and a discussion of how the methodology used to make the estimate has improved over time.

The largest issue with answering this question is that it depends heavily on other factors, some of which are quite hard to predict. Consider https://en.wikipedia.org/wiki/Energy_intensity , which measures how efficient nations are at powering their needs. Consider all environmental impacts (not just energy & climate change), this is a popular formula:

This formula describes the impact of human activity on the environment as the product of three factors: Population, Affluence, and Technology.

Also notice that even when people or countries become more efficient, that doesn't necessarily reduce damage, since use may then rise:

If you made assumptions for all of these factors and their dependencies and interactions, as well as unspecified behaviors (e.g., diet) then one could make a rough estimate of the carrying capacity of the Earth.

Not the answer you're looking for? Browse other questions tagged environmental-impact ecological-footprint population or ask your own question.

7
What is an environmentally-conscious replacement for white yogurt?
7
What is the IPAT identity, and does it still matter?
5
If everyone were to be vegetarian, what would be the carrying capacity of the Earth?

9
How much is the world population expected to grow in the next decades?
7
What is the IPAT identity, and does it still matter?
9
Which is the most sustainable type of pencil?
14
What are ethical ways to curb the global human population increase?
2
How to use Maximum Sustainable Yield concept with given a given population, growth rate and carrying capacity?
5
If everyone were to be vegetarian, what would be the carrying capacity of the Earth?
3
Is there a scientific consensus whether lifestyle or amount of human population the biggest problem
7
Is global population growth ignored in sustainable energy discussions because it makes any effort seem futile?
3
Which global fertility rate would allow the human population to adjust to Earth's carrying capacity while maintaining an acceptable dependency ratio?