What was the repowering programme that caused a spike in Danish turbine decommissioning in 2002?

The figures from the Danish Energy Agency do show a spike in decommissioned wind capacity in 2002: 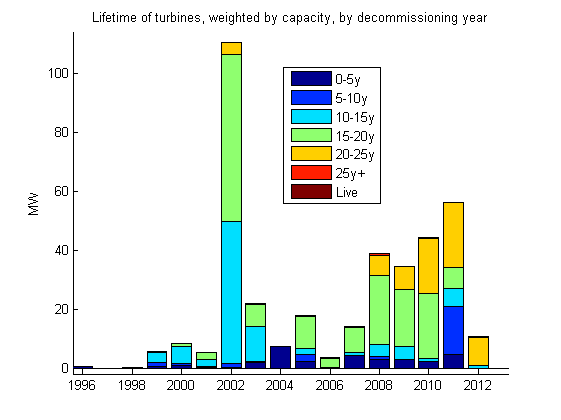 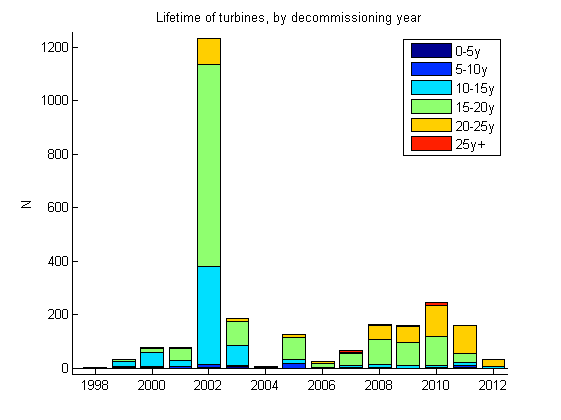 (Note that the Himpler and Madlener paper "Repowering of Wind Turbines: Economics and Optimal Timing" does not discuss the specific Danish law and incentives behind this repowering programme)

To answer this question at the depth requested could require a few reams of paper and its own website :-).

The original "Energy 81" incentive set targets and these were adjusted along the way by agreement and negotiation between government and industry.

The refence in (2) below gives a reasonably blow-by-blow description of the timing and nature of major relevant incentives. Repowering is not mentioned per se but you can easily see where it might fit in to such a program, laden with incentives to do new better things, create jobs, meet increased performance targets etc. Note the electricity production support scheme described as "only for gas from 2000" - that sounds like a very major reason to get any qualifying wind turbine work completed BY 2000.

(1) This UK Tyndal Centre report gives a reasonable brief summary of the issues and processes and timetables involved.
The role of political uncertainty in the Danish renewable energy market.

Of significance is their comment about per turbine capacities. The original legislation was framed with both total megawatt capacity and turbine count targets in mind. The growth in per-turbine capacity was not anticipated originally and repowering was a consequence of the better economics achievable by obtaining more power (and energy) from a given site.

(2) Here is a summary of key Danish legislative steps along the way from about 1990. Note that it is not possible to with certitude fit any one action to a repowering spike in 2000, but the relationship of the various actions to what occurred is traceable in general terms. Denmarks's Green industrial development

Here is a subset of those with arguable relevance. 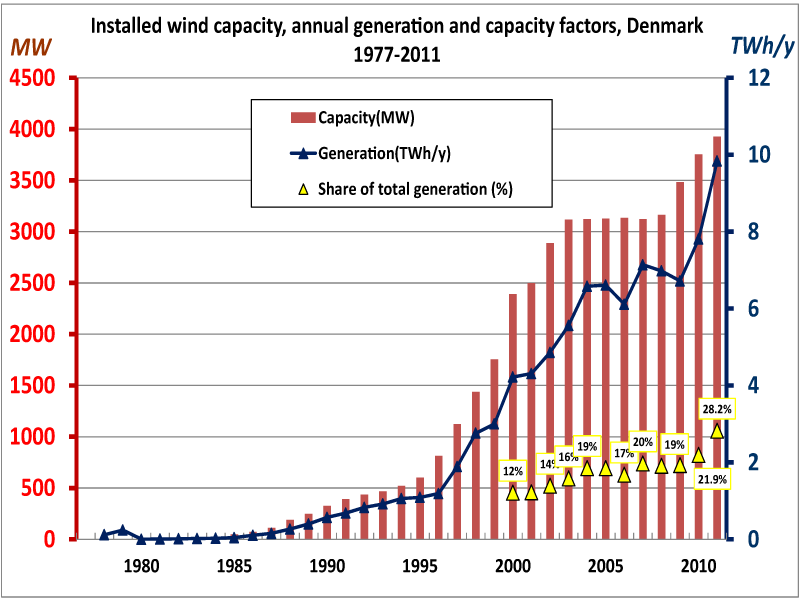 The motivation is summarised in passing in Repowering of Wind Turbines: Economics and Optimal Timing - reference details at end of this answer.

Why wind power works for Denmark

Note: The aim of repowering is to make better use of wind resources on existing sites. Older sites can be "fully populated" by turbines in the 100's of kW range such that no new turbines can be installed. By replacing existing turbines with fewer much larger turbines with much higher mean heights an increased amount of energy can be intercepted for the same site area.

The picture below is from Europe Replaces Old Wind Farms
The amazingly similar [tm] cloud formations indicates that this is a conceptual rather than actual "after" example: 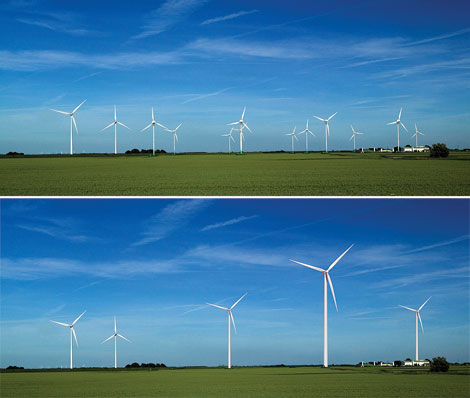 I've found the answer by chance:

Denmark's first wind repowering programme ran from 2001 to 2003. Owners of turbines smaller than 100 kW were able to install three times the capacity removed and receive a bonus on top of the normal FiT for the first five years. For units of 100 kW-150 kW, owners could install twice the capacity removed and receive the same treatment. Under this programme 1480 turbines totalling 122 MW were replaced with 272 new turbines of 332 MW in sum. The second Danish repowering scheme ran from 2008-2011 and offered a premium on top of the normal tariff for replacing up to 175 MW of old turbines with new machines that had at least double the capacity.

However, one of the reasons for supporting repowering - better use of good wind sites - often did not apply. Owners of old wind farms could decommission their turbines and sell the resulting repowering certificates to other wind developers, who then applied the extra FiT to new projects elsewhere.

“You just had to show you had decommissioned old turbines somewhere in Denmark,” says Sune Strøm, chief economist at the Danish Wind Industry Association. “There was no geographical link.”

According to Strøm, the system distorted the market value of old turbines and made the cost of compensating old investors artificially high. Today there are no specific incentives for repowering in Denmark.

Not the answer you're looking for? Browse other questions tagged wind-power economics or ask your own question.

11
Trickle-charging batteries for outdoor usage/ wind turbine suggestions
9
Wind turbine vs. solar panel or both?
6
How quickly can the offshore-turbine supply chain expand?
7
At what point are home windmills sustainable?
7
What are the physical limits on wind turbine size?
4
Is there a recent study that shows how accurate wind turbine wake models are?
0
Is it possible to reverse the air flow of a roof turbine/whirlybird?
5
Is there a simple on-line tool for estimating wind turbine power output?
5
How to use a band brake cable with my home built wind turbine?