Can an internal greenhouse improve the thermal resistance of a glass panel wall?

Earthships, contrary to this, use plenty of windows facing the sun. Is this because the double panel glass corridor (used as a greenhouse) provides more thermal resistance than a glass wall alone? Since enclosed air cavities have higher R-values, I assume this to be the case. 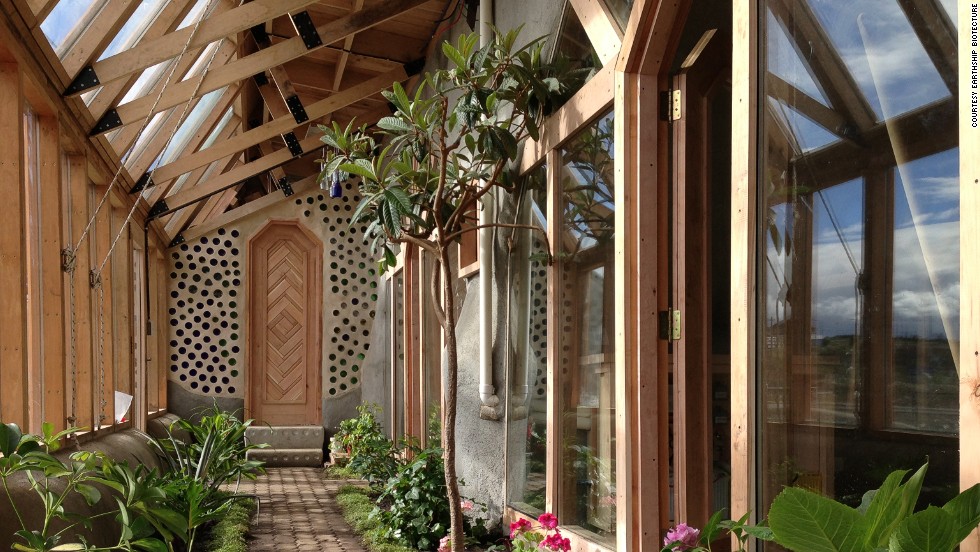 Under which conditions will this hold? What should be the dimensions of this corridor? Is the temperature inside the double panel wall bearable or is it too high to be used as a living space? Can window shades or deciduous trees be used to regulate temperature in these cases?

Earthships are one very romantic notion of what a house should be, but the massive amount of glazing usually leads to thermal problems. This is particularly true of the earlier designs (1970s through the 1990s).

There is a long, long, long history of failed earthships that you really should study before trying to fix what is inherently a broken design.

All visible light ultimately ends up as low-grade thermal heat. There is no way around that — it's basic physics. You can't let the light in without letting the heat in. Just. Not. Possible.

Even if you filter out the UV and the infrared, you end up with ~42% of total solar energy as visible. That's as much as ~315W of heat per m² of glazing.

Unless you can solve the problem of what to do with the heat that builds up once visible light degrades in the living space — in the order of GlazingArea*cos(latitude)*315W — there's no point worrying about what's happening in the corridor/greenhouse outside.

Earth coupling is usually the first (and best) option to consider to store/sink heat and moderate internal temperatures, but that depends entirely on your local climate (which you haven't described). It might not even be a viable option. If it isn't, then things get complicated really quickly, with alternatives introducing new problems of their own that then need to be resolved by adding/doing other things. Bandaids on top of bandaids on top of bandaids.

All that said, when I went through this process recently for my own home (in a warm temperate climate), I ended up with a well-insulated lightweight frame, an appropriate amount of double-glazed/thermally-broken/argon-filled/low-e/high-SHGC windows primarily on the equator-facing wall, a 2.4m deep verandah around the whole house with translucent sheeting towards the equator, and an exposed/earth-coupled/polished concrete slab insulated only around the edges. Less complexity, much easier to build, much less active management required, and very thermally self-regulating.

Real-world performance » romantic ideals (at least in my book).

PS: In an earthship with a greenhouse/corridor out front, incoming light gets absorbed by plants and paths, converted to low-grade heat, and re-emitted as long-wave IR. The glazing between the greenhouse and the living space is (now) usually double-glazed. Since glass is opaque to long-wave IR, the outer pane of the IGU absorbs the radiation from the greenhouse, heats up, and then re-emits it in both directions. Even in the absence of a low-e coating, half of the heat goes back into the greenhouse. So it's not really "the enclosed air gap" that increases the R value, it's primarily radiation dynamics and how different parts of the spectrum interact with the glazing between the greenhouse and the living space. The physics wasn't well understood in the 1970s when the first earthships were built. Now the physics is understood, but most folk can't seem to grasp/apply it.

Glass has low thermal capacitance and is translucent. Opposite of Trombe wall.

Not the answer you're looking for? Browse other questions tagged thermal-regulation or ask your own question.

2
What is the most efficient disposition of windows to prevent thermal loss and improve lighting?