Where are commercial conditions for a CCS NG or coal plant most likely to emerge in the US?

The first (likely) commercial scale coal ccs plant is scheduled to begin operation at Boundary Dam in Canada by the end of the first quarter of 2014 (Estevan Mercury). A few key points about the project:

What we see here is a capture project in a location where the captured CO2 will have economic value that won't all be lost by transportation costs, government financial support, and active regional research in CCS. My questions is where and when will similar circumstances arise in the US?

If you could be specific about current or likely government policies (local, state, or federal) and the likely value of captured CO2 (most likely for enhanced oil recovery), that'd be appreciated.

Also (this may be tangential and a separate question on its own), if you have any insights on the technologies that may obviate the need for government support or high captured CO2 values, I'm definitely interested in that as well. Here are some links about alternative capture methods:

A ton of coal is roughly 240 kWh of electricity. At present, the coal mine north of me charges the local power company something like $1.90 /ton for coal. So the fuel cost is about a cent per kWh. The wholesale price of electricty is about $.03/kWh. The retail price of that power is $.15/kWh.

A $24/ton carbon tax would be 10 cents/kWH. That's enough to make people start looking for better ways. Wind and solar start looking very attractive. $100/ton would raise power costs by 50 cents/kWh. Almost any renewable power can be efficient at this level. Note that natural gas releases a lot less carbon per kWh.

But I stray from the question.

The two most promising ways I see at this point:

For this to be successful, all it would take is a reasonable way to heat a barn using a charcoal generator fueled with farm waste (corn stalks, straw, moldy hay) In a nutshell, you need to burn roughly twice the fuel, but half of it is turned into charcoal, which you can either put on your own fields, or sell. The science of this is still new. Stay tuned.

There are other possibilities. Fertilizing the oceans with iron comes up, but I don't think we understand oceanic ecology well enough. It would be a bitch to measure progress. At least with charcoal and trees, we can make good estimates of how much carbon is there.

The power plant near my home looked at a pilot plant for extract CO2 from the exhaust stream, and storing it underground. It looked like a 10% cost in plant efficiency, and a large increase in plant cost.

You asked about costs.

cites an average of 377 tons/acre averaged across 18 sites.

So if you are willing to wait, the cost is somewhere between 50 cents and 5 bucks per ton.

If the 10% efficiency loss for CO2 separation at the power plant and deep well injection is correct, then since a state of the art coal plant is about 45% efficient, it would increase the cost of power by 45/35. Your ton of coal produces 240 kWh at 3c or about $7.20 This would raise the price by around $2. Now the separation process is only about 70% efficient. (Making it more efficent makes the power plant less so.) So first order ballpark cost is around $3 per ton of carbon. It would be lower for natural gas and oil fired plants since they get more energy per ton of carbon.

The charcoal sequesterization, if a workable system can be made, actually MAKES money. Many crops produce enough residual plant matter that what to do with it is an issue. Not all of it can be used for feed, and all too often growers will bale it just to get it off their field. Significant amounts are burned in outside furnaces to provide heat for livestock sheds, shops, etc. It should be a simple redesign to make charcoal makers, which would get only half the heat per bale, but produces charcoal as a byproduct. The farmer wins with more productive fields as he works this into his land, mostly showing up as decreased fertilizer cost, fewer crop failures, and higher production -- maybe. Quantifying this is difficult to impossible because we are at the cutting edge of soil science with carbon. It will also be a tough initial sell. I would expect a charcoal maker to be 2-4 times as expensive to make as a bale burner.

This is a process that will work with a lot of municipal waste too that would otherwise fill landfills.

I'm going to focus on the potential for enhanced oil recovery, permanent sequestration and government support for active projects. Carbon capture technology is a whole other beast.

sequestration.mit.edu has a great database of active and cancelled CCS projects in the US. I was surprised how many projects are on the burner now. Here is a summary:

Including all of the cancelled projects, the US government is spending well into the billions on CCS across the country. Texas is obviously most active.

Where Conditions Are Favorable to Enhanced Oil Recovery

According to the DOE, CO2 injection accounts for 60% of all EOR in the US.

CO2 injection has been used successfully throughout the Permian Basin of West Texas and eastern New Mexico, and is now being pursued to a limited extent in Kansas, Mississippi, Wyoming, Oklahoma, Colorado, Utah, Montana, Alaska, and Pennsylvania.

Most of this CO2 has come from naturally occurring reservoirs, but increasingly CO2 is coming from industrial processes, such as NG processing, fertilizer.

One demonstration at the Dakota Gasification Company's plant in Beulah, North Dakota is producing CO2 and delivering it by a 204-mile pipeline to the Weyburn oil field in Saskatchewan, Canada.

According to Dakota Gasification's website, the CO2 is injected for permanent sequestration. In fact, Cenovus, who signed a 10 year agreement to purchase ~2740 tonnes CO2/day from the Sask Power project above, currently gets 5,500 tons of CO2 per day from North Dakota. Sask Power CEO claims they can sell their CO2 for $15-50 per ton (Calgary Herald).

The two maps below show the top 50 largest proved oil reserves in the US and then a map of shale oil and gas formations. 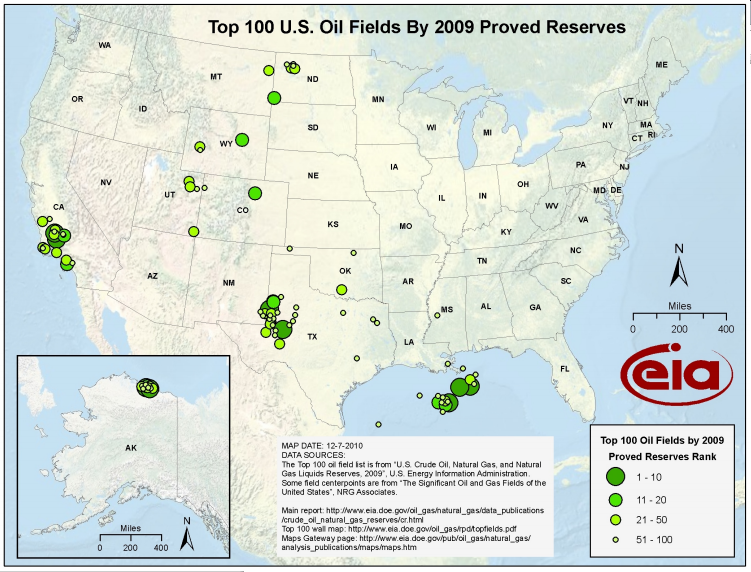 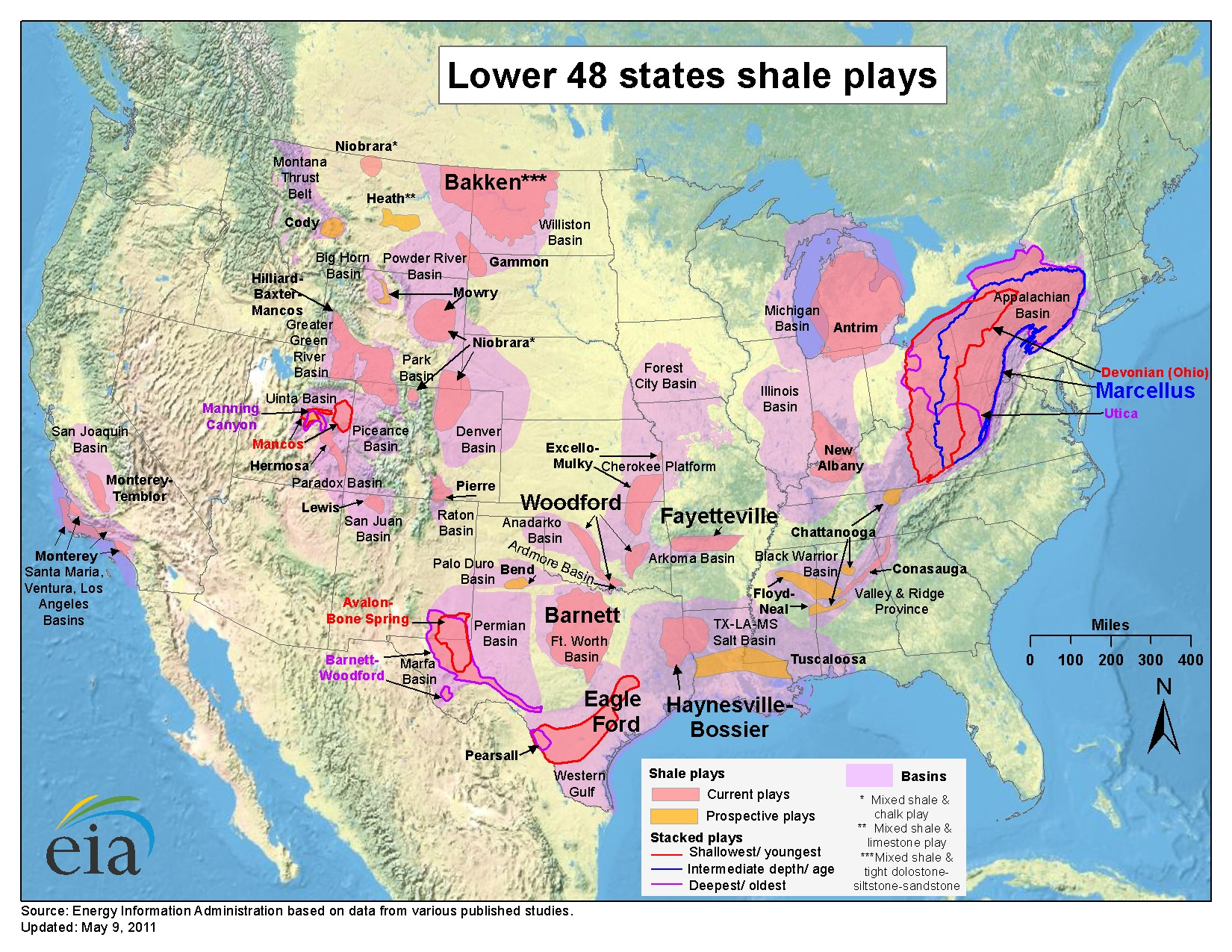 It would seem that our largest oil reserves are in Texas, California, and the Northern Great Plains. However, these reserves coincide greatly with shale gas reserves. According to a 2012 study in Environmental Science and Technology, 80% of US capacity for CO2 geological sequestration (ie deep saline aquifers) exists in shale gas reserves. Unfortunately, the fracking process undermines the ability of the aquifer to meaningfully sequester the carbon - the CO2 would escape through the tiny cracks used to extract the natural gas.

Not the answer you're looking for? Browse other questions tagged decarbonisation carbon-sequestration or ask your own question.

0
Which CDR options, on balance, are the most feasible?