Where can I find a comprehensive list of products that can be produced without mining?

According to this article:

Every megaliter of seawater contains about 1300 kg of magnesium, 900 kg of sulfur, 400 kg each of potassium and calcium, and smaller amounts of virtually every metal on the periodic table of elements.

Sodium also is present in high quantities, though perhaps it's not particularly useful for manufacturing and therefore not mentioned.

Seawater is probably one of the most sustainable sources for minerals/materials, alongside products from sustainably managed plants or animals.

Are there any websites that list products completely comprised from such sustainable sources, without mining?

The four most concentrated metals in sea water are Sodium, Magnesium, Calcium and Potassium, and these are the only ones commercially extractable today. The least concentrated is Potassium at 400 parts per million.

Materials below the level of concentration of the above 4 are not economically extractable by direct removal by filtering, membranes and similar due to energy considerations. The energy required to move the vast quantities of water through a filtration system typically greatly exceeds the energy needed for extraction by other means on land.

Two possible exceptions are Lithium and Uranium due to the large amount of energy released when they are used as 'fuel' in nuclear reactions.

The Japanese ran a Uranium extraction experimental system for some years but practical activity on the project seems to have ceased (see below).

Available materials can be surprisingly low. All the dissolved copper in seawater (20th in occurrence) amounts to about 50 years of use worldwide at current rates. Getting the Copper out would be a humungous task and clearly not practical.

(1) Other means: As an alternative to filtering other means have been and are being investigated which MAY have application for a range of minerals.

(3) Ref1: This excellent paper discusses the issues involved and provides details of attempts to extract Uranium and Lithium.

A company set up in New Zealand a decade + ago to do Lithium extraction. It SOUNDED plausible and much money was spent. The promotrer turned out to be an internationally known con-man! :-(.

Moving these gigantic amounts of water is not just a practical problem:
it involves energy; a critical parameter especially if we consider the extraction of two elements that are to be used as energy sources: lithium and uranium.

**In both cases, the feasibility of extraction is determined by the energy needed according to the well known concept of "EROEI" (energy returned for energy investment)

(4) The geochemistry of seawater
Table of 84 minerals in seawater here {jpg image} Copied below - order inobvious. 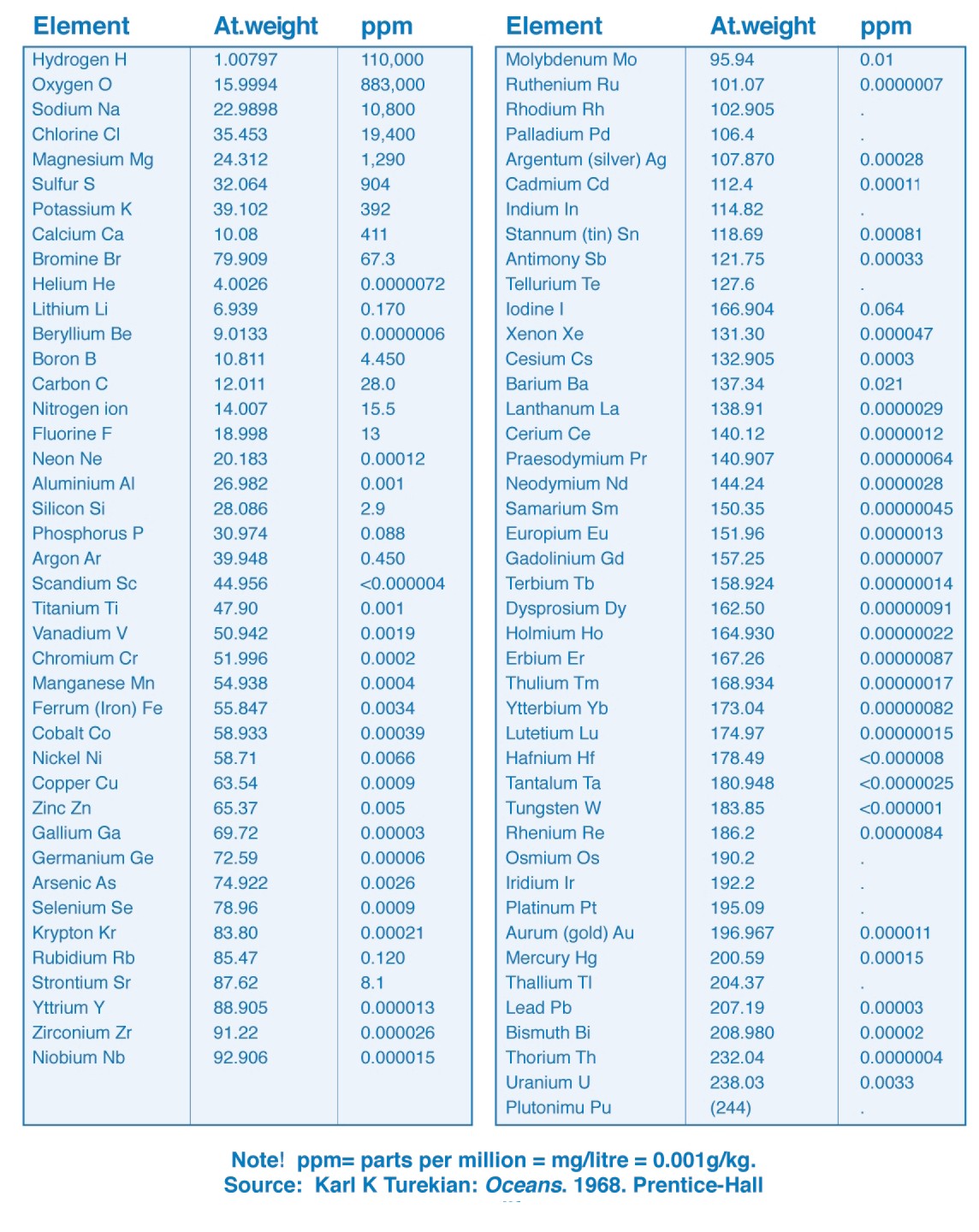 Seawater is no more a sustainable source of minerals than mining is. They're both depleting a finite resource, insofar as the minerals in the sea come from rock erosion anyway. There's a small difference in that some of the minerals in the sea come from waste from human activities. But in those cases, mining landfill sites or doing mineral extraction at sewage farms is going to be less resource-intensive and more cost-effective.

One big difference is that mining uses fewer resources to do the extraction, than seawater.

Another is that the ecosystem impact can be easier to mitigate with mining, though often this is not done, owing to weak regulation of miners. Seawater extraction often involves some form of filtering of very large volumes of water, close to shore, potentially with consequential high impacts on the near-shore ecosystem. Typically, vast volumes of sea water must be filtered to extract small quantities of useful minerals.

To my knowledge, the only minerals currently extracted from sea water cost-effectively are in sea salt, and they're cost-effective because they are at much higher concentrations in seawater, so solar evaporation from rock pools does most of the work.

I haven't seen a comprehensive list. In fact all the sea mineral products I've seen on the net are for home gardening.

I wouldn't rush to the conclusion, however, that because these products use sea minerals, they are more sustainable. From a land use perspective, of course they will be. However, mining minerals from the sea can be very energy intensive, according to a lot of sources, mdpi for instance.

High energy intensity, depending on the energy source used, could actually lead to more air pollution, including GHGs.

Not the answer you're looking for? Browse other questions tagged manufacturing mining seawater or ask your own question.

4
If the concentration of minerals in oceans was reduced through extraction, would they be replenished quickly?