What is marginal energy?

I answered to a question and used the term "marginal energy". The answer wasn't understood by all, so I'm going to expand on the term to illustrate how it works. So, what is marginal energy?

What is marginal energy, or fuel on the margin?

Fuel on the margin, when talking about the electric grid, refers to which fuel will be used to generate the next additional kilowatt of power that is required.

Imagine that your house is in a steady state, using the same amount of power, with a steady mix of fuel being used to generate that power. When you turn on a light, which one of those fuels will increase in generation to meet that demand?

This is the fuel on the margin, and is largely (but not exclusively) a function of how much it costs to turn that fuel into electricity. This price takes into account the time of day, cost of the fuel, amount of extra power needed, technical constraints, and rules and regulations.

Which fuel is typically on the margin in the U.S.?

Currently, for most of the U.S., natural gas is the fuel most likely to be on the margin. Soon, it will be the fuel on the margin for the entire U.S. This will likely remain the case until energy storage becomes widespread.

The U.S. is divided into Regional Transmission Organizations and Independent System Operators, which are non-profit organizations that manage the grid in different regions of the country. I've taken a look at data from some of the largest to see which fuel is on the margin for each. These regions cover most of the U.S. population (the southeast and most of the west are excluded as these markets are still vertically integrated, meaning that each utility is self-regulated and there's no central source of data).

MISO covers most of the midwest and a few southern states, and operates 175 GW of capacity.

MISO provides real time fuel mix data (here), as well as historical real-time fuel on the margin data. I downloaded the data and did a quick analysis:

PJM covers 13 states on the east coast, serves 65 million customers, and has 166 GW of total capacity.

PJM provides marginal fuel data on a monthly basis, with a two month delay. The most recent State of the Market report also includes a historical analysis of real-time marginal units in Figure 3-5: 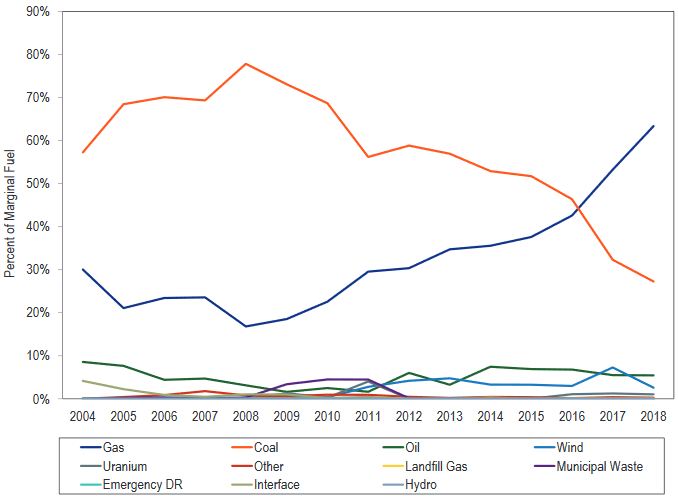 The Southwest Power Pool (SPP) covers a column of states between Texas and the Canadian border, and operates 85 GW of capacity.

SPP provides real-time generation mix data, but the graphic seems to be broken currently. I downloaded the data and did some analysis:

While it's clear from this chart that coal is the marginal fuel, the interesting thing is how it's cycled to accommodate the morning bump in wind generation. In their most recent 10-year plan (from 2017), SPP predicts retirement of at least 1 GW of coal capacity (of 26 GW currently online), and addition of as much as 10 GW of natural gas capacity (added to the existing 36 GW). Considering how coal is currently being cycled, along with the expected change in future generation mix, indicates that by 2025 natural gas will almost certainly be the marginal fuel in SPP.

ERCOT covers most of Texas and manages 76 GW of capacity.

For Texas, I wasn't able to find information directly on fuel on the margin, or hourly output by fuel. However unlike most other ISOs/RTOs which operate energy and capacity markets, Texas has an energy only market. As a result, plants compete almost exclusively on the price of power they deliver to the grid. This means that the monthly breakdown of total generation (available here) gives strong clues about which is the de facto fuel on the margin:

From this it seems clear that natural gas ("Gas-CC" and "Gas") is essentially the fuel on the margin.

CAISO covers most of California and manages 60 GW of capacity. 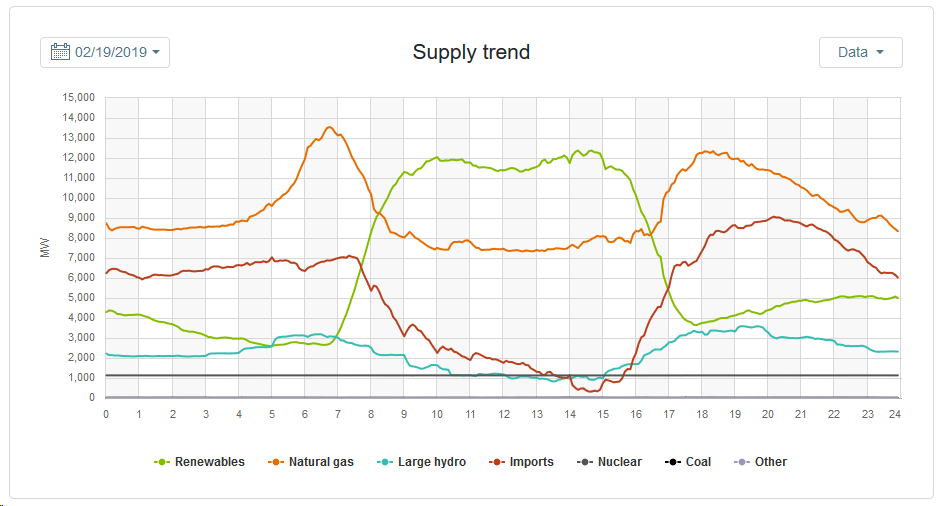 Coal (near the bottom) is a flat line. When renewables (mostly solar) come on- or off-line with the sunshine, natural gas ramps up and down, meaning it is the marginal fuel.

NYISO also has real time data on their website: 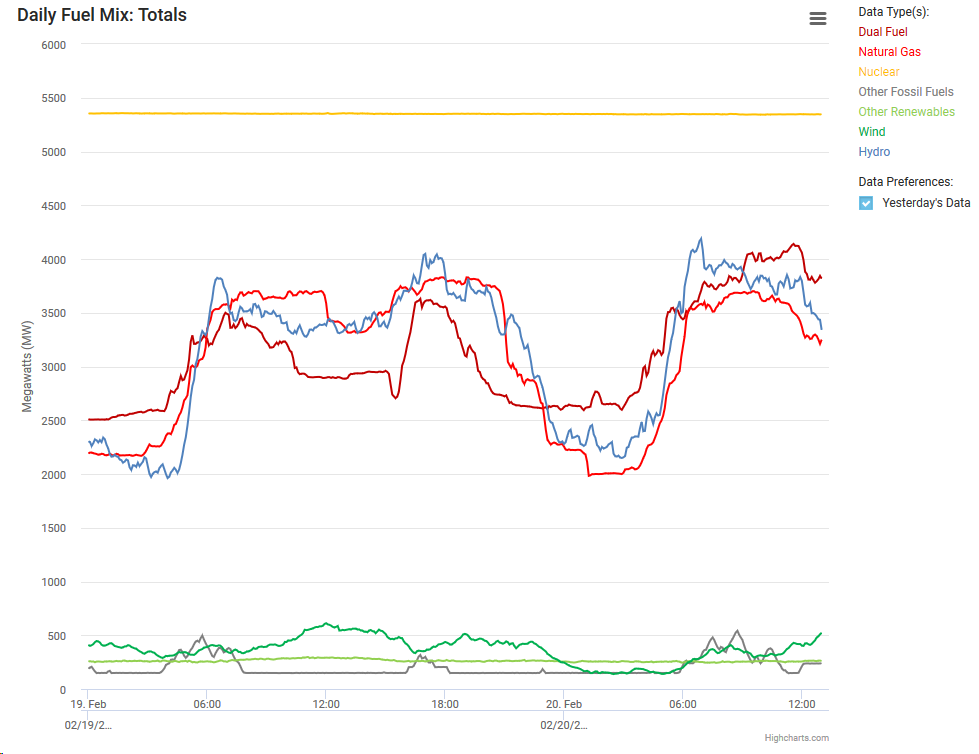 The story here is more interesting due to the large amounts of hydro electricity available, and the large number of dual fuel power plants which can burn either natural gas or diesel. So while it may look like a three-way tie, we can lump dual fuel plants with natural gas plants, since diesel is more expensive than natural gas. This means that natural gas is also the marginal fuel in New York.

Real-time ISO-NE data is available from the EIA: 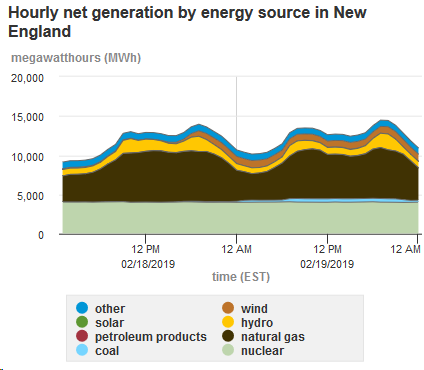 From the chart it's clear that natural gas is the most variable fuel -- the most likely to increase or decrease output over time. This is another way to say that it is the marginal fuel.

Hydropower is a resource that is currently nearly 100% utilized.

Now, somebody from the population reduces his energy use to zero. Thus causes a reduction of 1 MWh in the power generation. It doesn't make sense to reduce hydropower, so the coal use will be reduced to zero.

Who of the 10 users of energy is the guilty one using the coal? Let's analyze.

(Here I assumed for simplicity that energy can be transported with 0% losses over infinite distances, for simplicity. If this isn't true, which is the case especially for electricity, then the marginal energy analysis needs to be separately made for each price area.)

Not the answer you're looking for? Browse other questions tagged energy energy-use coal or ask your own question.

15
What has a lesser carbon footprint? Continue to drive my current car until it is no longer useful or to buy a new car?
5
Is electricity used at night more likely to be renewable?
3
better to heat house with gas or with electricity?
4
New electric vehicle: does the cost outweigh the benefits?
2
How to persuade people that scrappage schemes & suchlike are a bad idea?

9
Is gasoline or Diesel refining less sustainable, per energy output?
12
How much energy does it take to create a single light bulb?
5
Energy Efficiency vs. Reduced Consumption
4
Are crypto currencies sustainable?
3
Does a short-term shut down of a coal plant cause more CO2 emissions than keeping it running?
2
Is it better to leave your computer on?
5
Is an incrementalist approach to decarbonisation feasible?
0
How to prepare my home for vacation to reduce energy use?
1
What do we do with all the coal mines?