Is electricity used at night more likely to be renewable?

Discussing charging my electric car with a colleague recently I argued that since (in Ireland) our renewable energy sources are mainly wind and hydro, since I charge my car at night the mixture of energy I use is likely more biased towards renewable sources than it would be if I charged during the day. My reason being that (at least for wind and hydro) their output is relatively consistent throughout the day and since less energy is used at night nationwide but a similar amount of renewables are produced that my energy mix must therefore be biased towards renewables.

I haven't been able to find any source to back up my claim but so i was wondering if someone might be able to confirm or poke a hole in it.

In Ireland, electricity is equally likely to be from renewable sources during the day as during the night

ENTSO-E, the European Network of Transmission System Operators for Electricity, provides a transparency platform where you can see the hourly actual generation per production type for Ireland: 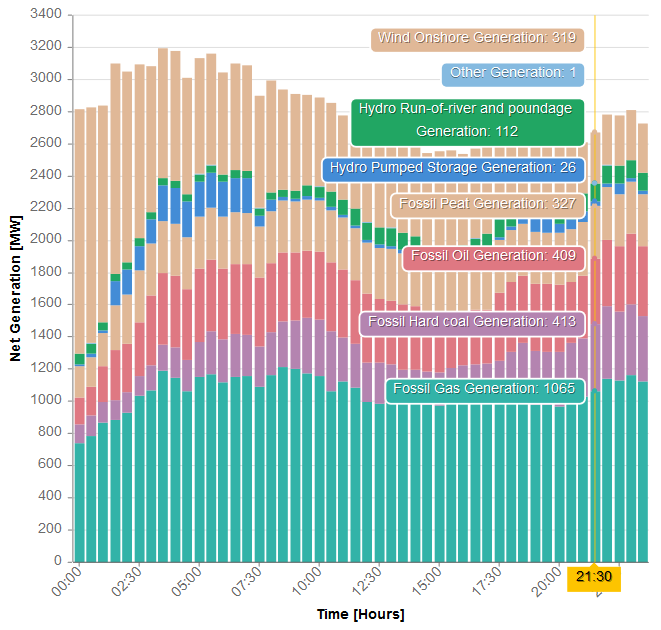 It's hard to pick out a trend just by looking at a day or two at a time, so I downloaded all the data for 2018 and did a quick analysis, binning power from 6am to 6pm together as day, and 6pm to 6am as night. Here's the breakdown by source:

To see the chances that any given watt-hour comes from one source or the other, I combined all sources into categories of renewable or fossil. Here's the percentage that each makes up:

The difference is 0.41% -- essentially negligible over the course of the year, and likely to shift from year to year.

So, what time should you charge your electric car?

Since I had the data, I decided to go a couple of steps further. First, I added up each half hour for the year for each power source: 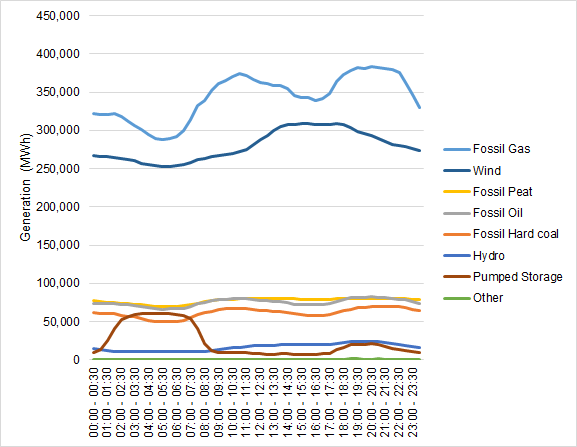 Those morning and evening "dips" in fossil gas generation looked promising, so I categorized everything again into fossil and renewable (ignoring pumped storage and other) and zoomed in on the range where they shift back and forth, with the average plotted (approximately): 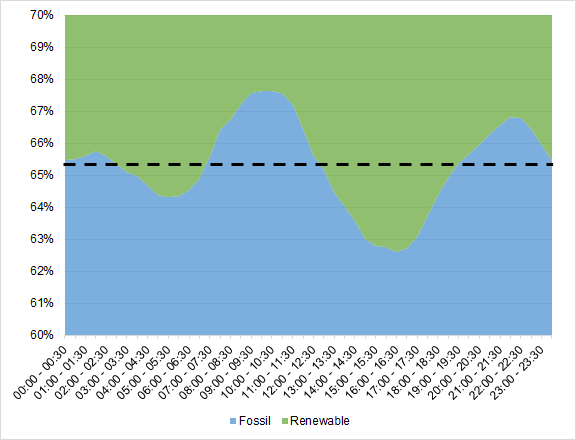 For any given time on an average day, this shows the percent of power that will come from a renewable vs a fossil fuel source.

On an average day, there are four hours in the morning and 7.5 in the afternoon during which renewables contribute more generation than average

Over the course of the year, 34.68% of all electricity comes from renewable sources. These are the times when renewables beat that average:

Not the answer you're looking for? Browse other questions tagged electricity renewables wind-power electric-vehicles hydroelectricity or ask your own question.

2
What is marginal energy?