Want to improve this question? Add details and clarify the problem by editing this post.

U.S. annual installations have been declining since 2012. Essentially everywhere else, besides China's low quality wind, there's only a handful of new farms being built. Is wind pretty much dead?

TL;DR: Wind is not dead, but a diverse set of economic, technical, and political factors have resulted in a leveling off of the rate of new construction.

From the U.S. Energy Information Agency:

These two factors (abundant suitable locations and declining costs) caused the boom in wind construction seen until about 2012 (despite the recession). From the interactive dashboard by IRENA, the International Renewable Energy Agency: 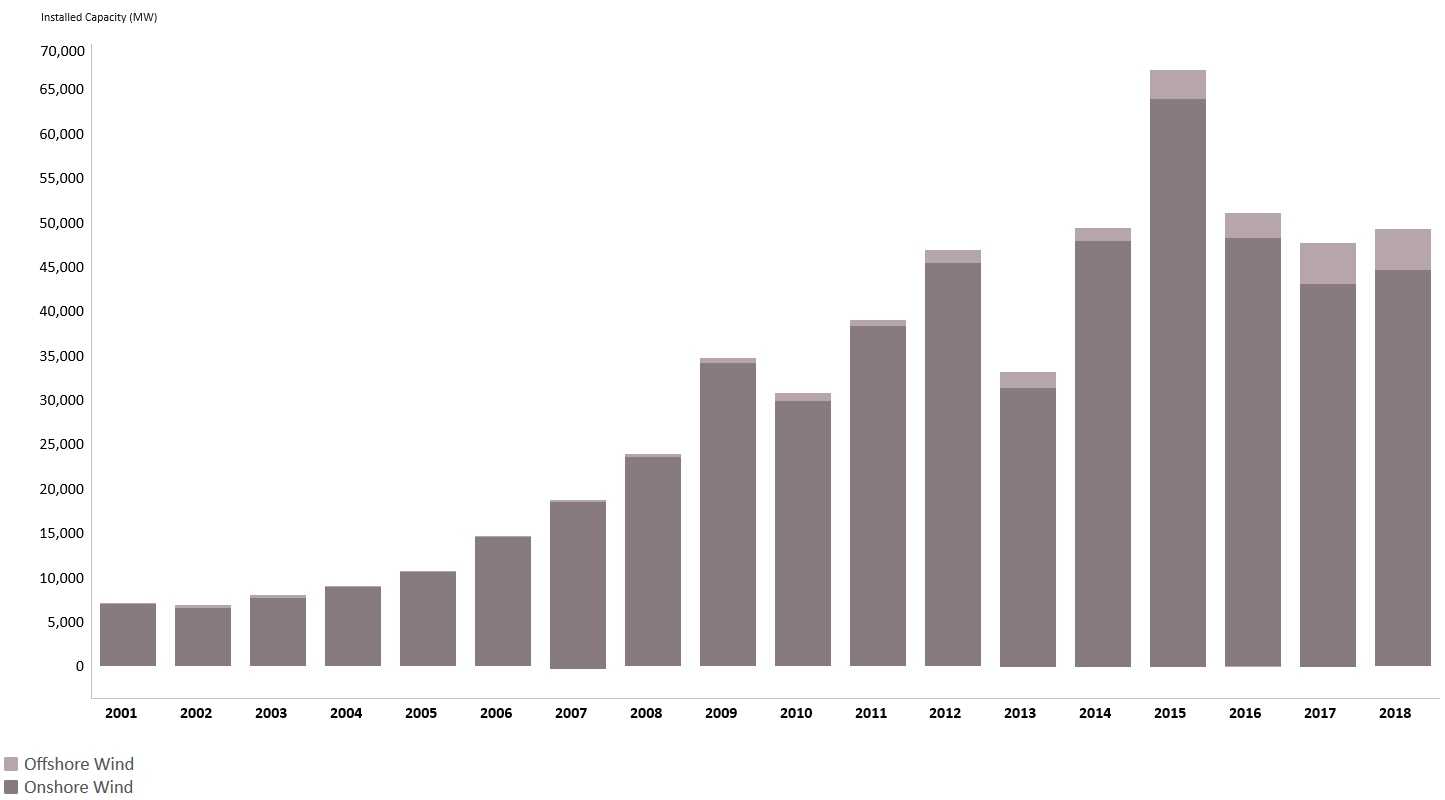 With costs level and the best sites taken, new additions are limited by other factors

The International Energy Agency (part of the OECD) provides wind capacity forecasts in their "Renewables 2018" market report and forecast:

[T]he phase-out schedule of federal tax incentives in the United States, the expiration of [feed-in tariffs] and grid integration challenges in China, and the timetable of auctions in Europe, India and other regions result in volatile annual additions.

(See this post from the U.S. Energy Information Agency for a good explanation of how tax incentives affect wind build-outs in the U.S.)

The report explains what would have to change to increase the rate of capacity additions:

In China, faster commissioning of transmission lines to reduce curtailment in northern provinces and larger auction volumes in 2021-23 are the main assumptions of the accelerated case. In order to accelerate deployment in the United States, more projects must qualify for federal tax incentives before they are phased out. In the European Union, greater auction activity and faster auction implementation in Germany, France, Spain and Italy drives the accelerated case.

A 9.5% year-on-year increase is pretty good. It's not dead. It's not merely stable. It's growing.

It's not growing fast enough for the good of the world. There's a huge resource remaining, waiting to be tapped - vast amounts in Europe, and every other continent.

No, wind power is not dead.

Look at the stock price history of Vestas Wind Systems, one of the major manufacturers of wind turbines.

Do you call a field where companies produce >20x return in 7 years dead?

(And to those who claim it might be a bubble: the price/earnings (P/E) ratio is 26.49 so overvaluation compared to neutral P/E 15 is 76.6% -- most of the >20x return is explained by its ability to create profits, and only very little by overvaluation.)

As far as Europe is concerned, more than half the new generating capacity installed in 2018 was wind turbine, the the amount installed in the first 6 months of 2019 is increased relative to 2018. In the US, AWEA is reporting that the 3rd quarter rate of installation of new wind turbines was, at just under 2GW, "highest third quarter on record". Doesn't look like there is any significant break in the growth of wind power.

11
Trickle-charging batteries for outdoor usage/ wind turbine suggestions
7
What are the physical limits on wind turbine size?
3
How to log wind statistics data
5
Is there a recent study that shows how accurate wind turbine wake models are?
4
What does the P90 of a wind resource mean?
3
Is 3 phase electrical generation more efficient to utilize than single phase?
4
Is there a simple on-line tool for estimating wind turbine power output?
4
What is the wind wake effect and why is important for wind turbines?
7
How many square kilometres of offshore wind farms would be required to replace the closing of a 4GW nuclear power station