I understand that much of the low CO2 emissions for ethanol as vehicle fuel are related to its entire lifecycle (CO2 is sequestrated when the crop is grown and released when it combusts so it is carbon neutral, except the emissions due to production and transport.).

But from looking at its combustion it releases approximately the same amount of CO2 as gasoline or petrol.

Since ethanol has about 50% less energy density than petrol (22.27 kWh/gal vs 33.41 kWh/gal), you have to use more ethanol to travel a given distance by car.

Does this mean that exhaust emissions in CO2e g per km are higher for ethanol and ethanol vehicles, compared to gasoline vehicles?

There are a ton of different factors to take into consideration here. Lets make sure we keep net GHGe and tailpipe GHGe separate here.

Net GHGe: Since 2015, satellite observation as well as international agriculture reporting data have started to show that the original assumptions surrounding Indirect Land Use Change (ILUC) for generation I and advanced biofuels have been grossly over calculating the effects of ILUC, as well as under and over accounting in other areas. Utilizing new data, there are several studies all pointing to a considerably lower GHGe footprint of Gen I and advanced biofuels. The most comprehensive study I've found to date has been A Life-Cycle Analysis of the Greenhouse Gas Emissions of Corn-Based Ethanol

The tl;dr here is, the current EPA model that claims ethanol lifecycle emissions are a 20% reduction from baseline gasoline still has the incorrect ILUC numbers. The real number as calculated in the above as well as several other studies [ GHGe recent evidence | ILUC data review ] is likely between a 35% and 50% reduction (with many studies finding in the 40%-45% range) from baseline gasoline. This is the net carbon accounting of EVERYTHING - Tailpipe, ILUC, vapor emissions, fuel production and transport, fertilizer - everything. It should be noted that the GHGe intensity of gen 1 and advanced biofuels are continuing to decline and will likely do so as shown below, and that none of these numbers even take into account other sources of ethanol with lower GHGe, including sugarcane and cellulosic. 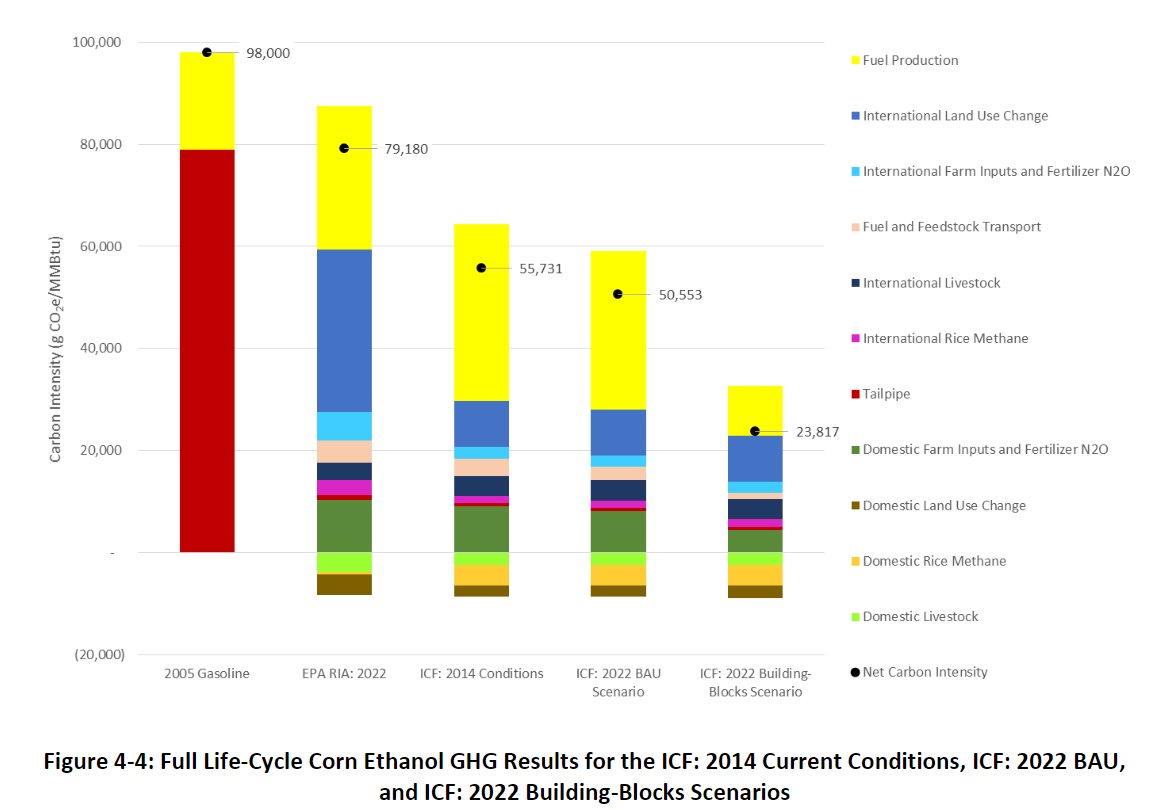 The first thing you'll notice in the above graph is that the tailpipe emissions of EtOH are a sliver of gasoline. This is confusing until you read the lifecycle analysis report.

The carbon dioxide emissions from corn ethanol are assumed to not increase the atmospheric CO 2 emissions as the biogenic carbon emitted is offset by the carbon uptake of new growth biomass. Life- cycle CO 2 emissions from biofuel tailpipe combustion are not included in the analysis. The biofuel tailpipe combustion CH 4 and N 2 O emissions are included however. These emission factors are based on EPA’s MOVES model results (EPA, 2015b; EPA, 2010g).

This may seem "shady" if you aren't used to the carbon accounting, but every atom of carbon (no matter the form) involved in the actual transport biofuel comes from sequestration of an identical carbon atom in the air. This is an even, 1-1 exchange. They note that other compounds that are not CO2 are included, as they may be a 1-1 carbon exchange but they may have an uneven impact (GHGe).

Now, you were asking about the actual tailpipe emissions, not the tailpipe emissions that were matched with carbon sequestration via agriculture. For this we have to do a bit of math, and use the correct numbers. Reference this same study:

But as always when utilizing ethanol - gasoline comparisons, the per-gallon numbers don't mean anything. Using an energy density of 121.12 & 79.86 MJ/Gal for Gasoline & EtOH respectively, we end up with 73.56 & 72.25 gCO2e/MJ for Gasoline and EtOH, respectively. that difference is effectively nothing, as if you jumped between the LHV and HHV of gasoline you can flip which fuel is technically on top. We should expect this too, because we're talking about general hydrocarbon bonds being taken from a fixed state of reduction to completely oxidized, and regardless of the species we should see similar if not the same amount of energy released from breaking those bonds in the same way.

There are two caveats here.

The second caveat is that EtOH can be considerably more efficient in producing usable work on a per-MJ basis than gasoline, due to its highly desirable qualities as an internal combustion engine fuel (specifically octane rating, octane sensitivity & heat of vaporization). EERC found that in both flex fuel & non-flex fuel cars, ethanol has a dramatic impact on fuel economy when looked at on a per-BTU or MJ basis. This is effectively an increase in efficiency in internal combustion engines, especially undersized engines under heavy load. I personally tested this on my own vehicle (2014 GMC Sierra, 5.3 flex fuel) and found almost identical results to what EERC found. 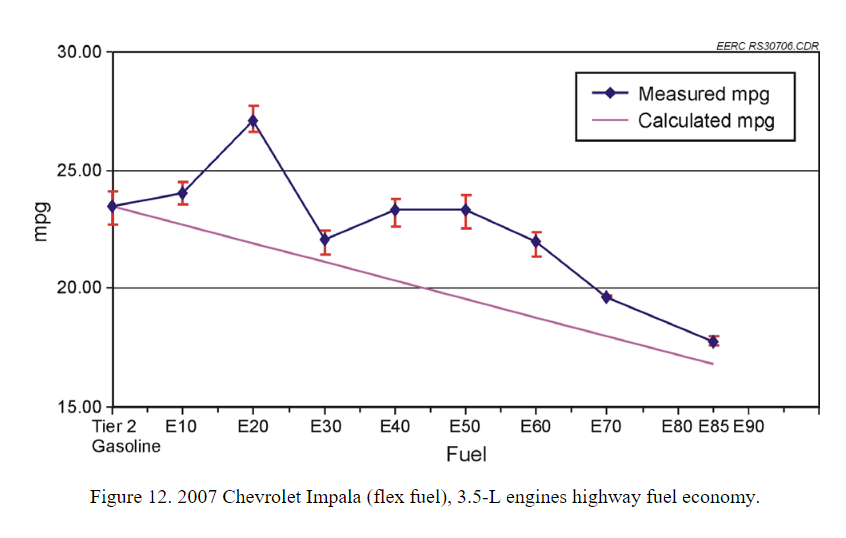 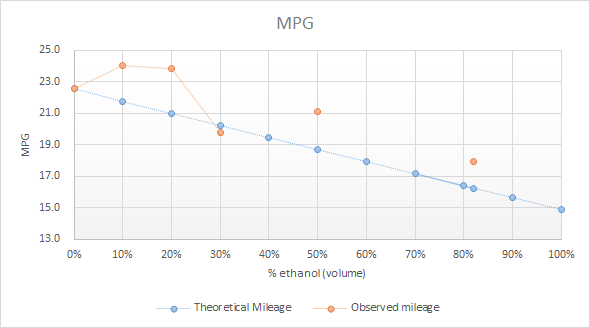 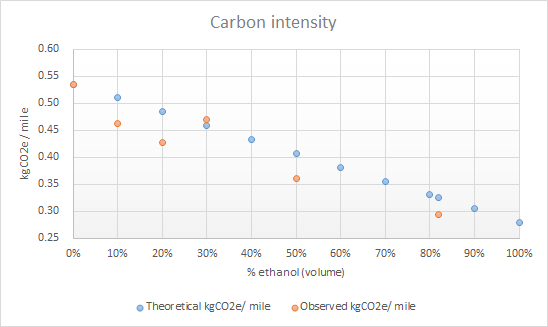 Here I have adjusted the per-mile carbon intensity utilizing the above calculated tailpipe emissions numbers instead of the lifecycle analysis numbers: 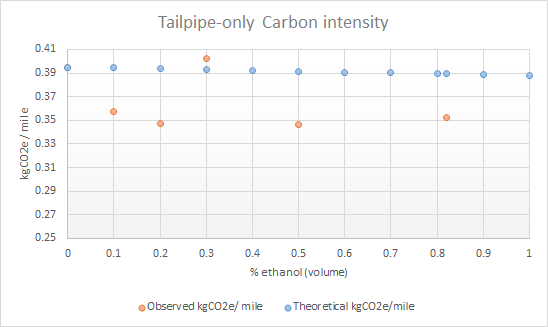 I believe we're just getting the point where vehicles are capable of utilizing higher blends of ethanol combined with gasoline, and I think there is going to be a dramatic reduction of carbon footprint of the U.S. fuel supply as higher amounts of ethanol are blended in, and as auto-manufactures begin demanding higher performing liquid transport fuels. Ford is already testing out all horsepower numbers for their Ecoboost engines on 94-95 octane fuel, and many manufactures are finding the value in producing downsized-turbocharged engines.

I don't know about per km, but this article has some info:

This calculator has some info showing the different CO2 Emmissions of petrol vs ethanol: https://www.sunearthtools.com/tools/CO2-emissions-calculator.php

In the case of ethanol, more of the gases in the exhaust are carbon and less of them are hydrogen, when compared to octane, which is fairly representative of gasoline.

Also, keep in mind that while ethanol can be made from renewable sources, it would probably make more sense to bury those renewable sources underground in an anaerobic environment and continue burning oil.

No way can the entire human oil usage be substituted with renewable ethanol, because of the sheer magnitude of oil usage. Only electricity can be the solution.

Not the answer you're looking for? Browse other questions tagged fuel-efficiency biofuels or ask your own question.

4
Efficiency of car-sized vehicles running on train tracks
8
Can chip tuning make a car more fuel-effective?
12
What is the most environmentally-friendly fuel source (e.g. wood, coal, oils, alcohols) for campfire cooking?
8
What would be the most sustainable biomass source for (100%) ethanol production?
5
Can alloy wheels (for a car) pay for themselves through fuel savings?
2
Are we running out of fuel?
6
Sources for the carbon impact of US corn ethanol?
4
Carbon footprint of CNG vs. Diesel as a vehicle fuel
2
How can I separate carbon monoxide from wood gas?
3
To what extent do CO2 emissions from motor vehicles vary?