Nowadays, everyone talks about it: climate change, and more importantly, how to stop it from happening. Although there's a lot of debate around the topic, the consensus is that by inventing a way of generating clean energy, we can slow down (and maybe even reverse) the effects global warming has on the planet. Using energy that was created without burning millions of years worth of stored carbon, we can not only power our everyday lives, but also capture the carbon we've been blowing into our atmosphere using the energy-intensive process of carbon capture and sequestration (CCS).

But there are still some problems. Currently, photovoltaic cells are pretty much useless during winter when it comes to fueling the homes of millions (at least where I live). We want to warm our homes, but there's not enough clean energy during those months, so we fall back on nuclear.

Even though cooling requires more energy than heating, might it break even? Will the rise in temperature have a positive effect on our energy production and the ability to satisfy energy demand?

tl;dr -- For the west coast of the U.S., a 20% decrease in heating demand and 18% increase in cooling demand results in a 5% reduction in carbon emissions from electricity and natural gas usage

Here's the approach I came up with to try and answer this question with some hard data.

1. Find a region of the U.S. which had a cold winter and mild summer, followed by a mild winter and a hot summer.

This is the sort of change we'd expect to see with global warming. If we look at the data for consecutive years, we minimize the effects of changes to the grid and/or population.

Looking at data for all regions, I determined that 2013 to 2014 for the Pacific region best meets the criteria. The area includes Alaska, Washington, Oregon, California, and Hawaii. This area stretches pretty far from north to south, so makes a decent sample that we could use to extrapolate. From 2013 to 2014 this region experienced: 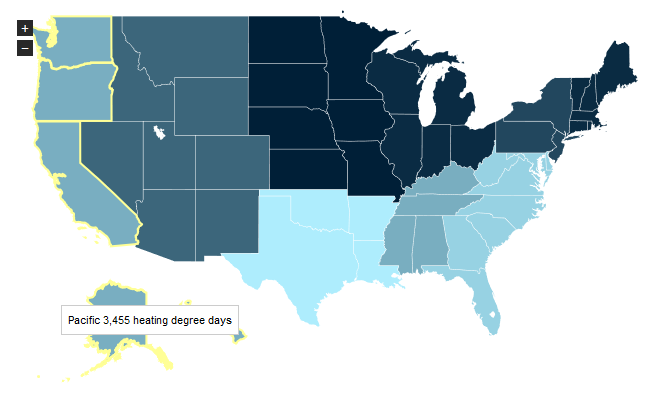 The population in this region grew by slightly more than 1% over that time period, so likely not a huge factor in any changes in energy usage:

2. Determine total usage of electricity and natural gas for heating over that time period

EIA provides monthly natural gas consumption by state. This is broken down by end use, so I looked at residential and commercial uses, which would predominantly cover heating. I left out use by vehicles and industry. Some industry uses would include heating, but for all five states this usage was fairly consistent month-to-month, and less than either residential or commercial usage for most months.

EIA also provides monthly generation by fuel source by state (scroll to "Generation" then "State-level generation and fuel consumption data" then "Monthly (back to 2001)") .

And here's the data summarized in a table with emissions data and percent change calculated:

This is a pretty limited (and possibly spurious) analysis, but it supports your hypothesis: a warmer climate reduces energy needs in the winter by a greater factor than the summertime increase.

The really interesting thing, especially in a U.S. context, is that a huge proportion of natural gas is used for heating in the winter. But in the summer, electricity from cooling comes from a more diverse set of sources. So any reduction in heating demand necessarily reduces CO2 emissions, but as the grid adds more wind and solar, increases in cooling demand don't necessarily increase CO2 emissions.

Some caveats to this:

If we could somehow manage radiative forcing, to reduce worldwide temperatures, we could make more power with solar cells.

Edit: Nice to have unexplained downvotes after an upvote. So, let me add some sources:

The US isn't the only land mass in the world you know. In much of Africa people and animals are dying in the heat. And on a global scale the man made energy requirements are rising exponentially because of global warming. In Britain for instance people are busy installing air conditioning which they never needed before. If you even looked at the extra air conditioning installed in the US you would probably find it outweighs all this estimated saving. Scientists are also working on superconductors which save quite a bit of energy, but necessitate very cold temperatures which will become increasingly difficult to maintain.

This question seems to have several components.

Secondly, global climate change in general has a wide variety of effects on regional, local, and micro climates, many of which are indirectly influenced by changes in temperature. The various consequences that might be considered "better" are infrequently examined, and I think it is because climate change enthusiasts would be tarred and feathered more adamantly than climate change deniers.

Next, a rise in temperature might be warmly welcomed by those living in colder climates, but there are many other methods to approach our heating/cooling power requirements which are better addressed through other means. For instance, building subterranean or partially underground homes has a huge impact on indoor climate for both Winter and Summer, in both hot and cold climates.

Personally, I've managed comfortably now for a year without any heating or cooling power use at all, but it took ten years to create a comfortable and sustainable micro-climate for myself, my plants, and my livestock. Your question inspires me to explore how I can now use my excess PV power for CCS because it's a shame to see that going to waste.

Not the answer you're looking for? Browse other questions tagged energy heating electricity-generation or ask your own question.

34
What’s the best strategy for turning off CFLs that will save energy but not reduce lifespan so much
15
How can I decarbonise my domestic heating, given severe physical constraints?
11
Should I take advantage of the higher heat pump COP during the warmest part of the day and "bank" heat in the house?
7
Scavenging heat from exhaust flues
5
Will customer preference drive adoption of energy storage the same way as EVs and solar power?
3
European energy production figures and graphs
2
Will there be a role for combined heat and power in an all-electric future?