Do we have a way to limit rising sea levels in a warmer global climate?

So, let's be honest the global climate is warmer and is going to be even much warmer no matter what. This causes glaciers to melt and more water to move to the oceans, and rising sea levels. This also cause the water in the ocean to be warmer, and as such when above 4°C it takes up more space due to dilatation. (Even though in the 0°C-4°C range it's the other way around).

Many people live at low altitude, and relocating all those people somewhere else would be an incredibly huge human population movement that is not really foreseeable. Also the sea level is used for measuring altitude, and if it rises more than 1m it will be very annoying to measure altitude, because we would have to know against which time period's sea level the altitude is measured.

Instead it seems like a better idea to somehow prevent the sea level from moving, even though the climate is warm. So far, warming has already been very observable, but sea levels doesn't seems to have risen much yet, so I have good hopes it's going to be possible. There is several ways this could be accomplished

I'm afraid the answer is no.

Greenland alone has enough ice to raise sea-level by 7m. That is, 7m of water spread over the oceans which cover 71% of the Earth's surface. The flow of Alpine glaciers could be dammed, but this is not going to make a significant difference.

Greenland is slowly melting now, and it is unclear whether this can be stopped. There is a far greater volume of ice in Antarctica, which could raise sea-level by 100m.

The only geo-engineering options are those which reduce the global mean temperatures as fast as possible. There are still plenty of opportunities to keep the temperature rise well bellow 4K.

It sounds like what you're talking about is geoengineering:

the deliberate and large-scale intervention in the Earth's climate system.

[T]he high-end sea level rise threat over the next few hundred years comes almost entirely from only a handful of ice streams and large glaciers. [...] This study summarises novel and extant geotechnical techniques for glacier restraint, identifying candidates for further research. These include draining or freezing the bed; altering surface albedo; creating obstacles: retaining snow; stiffening shear margins with ice; blocking warm sea water entry; thickening ice shelves (increasing buttressing, and strengthening fractured shelves against disintegration); as well as using regional climate engineering or local cloud seeding to cool the glacier or add snow. Not all of these ideas are judged reasonable or feasible, and even fewer are likely to be found to be advisable after further consideration. By describing and evaluating the potential and risks of a large menu of responses – even apparently hopeless ones – we can increase the chances of finding one that works in times of need.

The study includes this graphic demonstrating a number of these ideas: 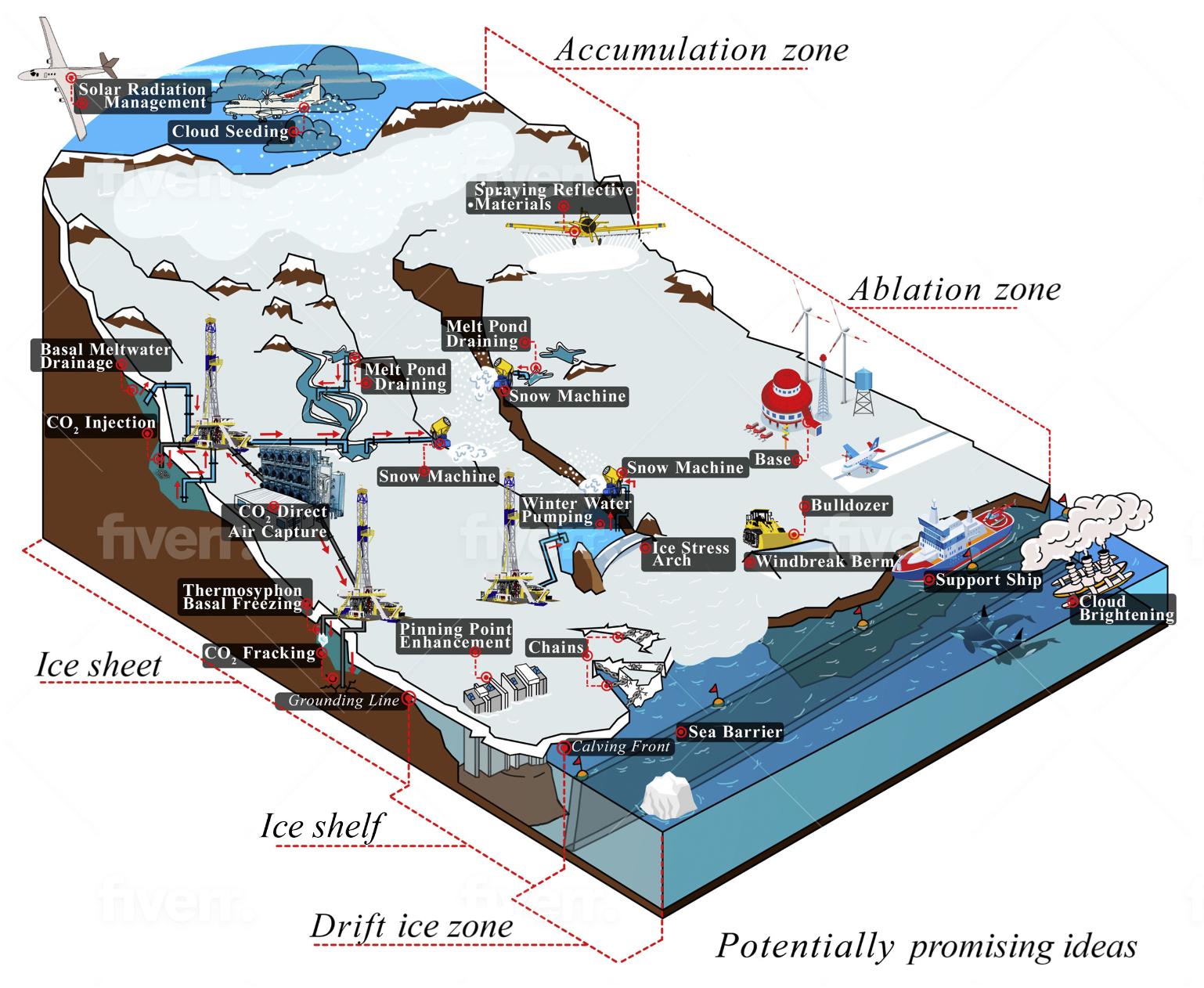 The conclusion includes a quick summary of each of the more promising ideas:

Not the answer you're looking for? Browse other questions tagged water-management global-warming seawater or ask your own question.

10
Is it actually possible to have a global "water shortage"