What form of electrical lighting has the smallest energy-footprint?

We all know that when it comes to household electrical lighting, LED lights consume the least amount of energy for a given amount of light, followed by fluorescent tubes, halogens, and Edison-age tungsten-filament light bulbs.

We also know that roughly the same ordering applies when looking at endurance; LED's will last until the end of the universe, flurescent tubes will last thousands of hours, etc.

We've also all seen the graphs that show how much money you'll save for all of these types of electrical lighting. Looking at initial investment (purchase) and energy consumption over a year, the break-even point when compared to tungsten-filament bulbs lies for LED lights somewhere in the order of ~10-15 months, fluorescent tubes ~6 months and halogens ~4 months.

This is all very nice, but this all has a nasty sales-pitch/green-washed marketing aftertaste in all of this; way too much focus is on cost for the consumer, and very little is being said on actual overall energy expenditure.

I want to prove to myself and everyone else that LED's are really the way to go.

What I mean is the following. I would like to create a graph, plotting total energy consumption versus time (so money is not considered), with four lines in them (one for each of the aforementioned types), that takes into account:

Of course, such detailed calculations can only be done when making some assumptions. Let's assume:

I find it very hard to find sufficient details on this subject to be able to do this comparison. I find it hard to believe that I'm the only one thinking this, but I'm just not finding them.

Does anyone know some sites or papers I should look into?

Perhaps this article is what you are looking for? It's a study by the US Department of Energy on

the life-cycle environmental and resource costs in the manufacturing, transport, use, and disposal of light-emitting diode (LED) lighting products in relation to comparable traditional lighting technologies.

There is a similar study done by manufacturer OSRAM

The conclusion of both studies basically is that currently the life-cycle energy of LED is more or less the same as that of CFL but expectations are that it will become better and that the LED's life-cycle energy will decrease by approximately one half.

i signed up just so i could make this comment. THelper♦ provided a good link to a DOE report on this topic, which i was researching because my roommate is skeptical about the advantages of efficient bulbs.

the report THelper♦ cited has the following bar graph that pretty much answers the question: 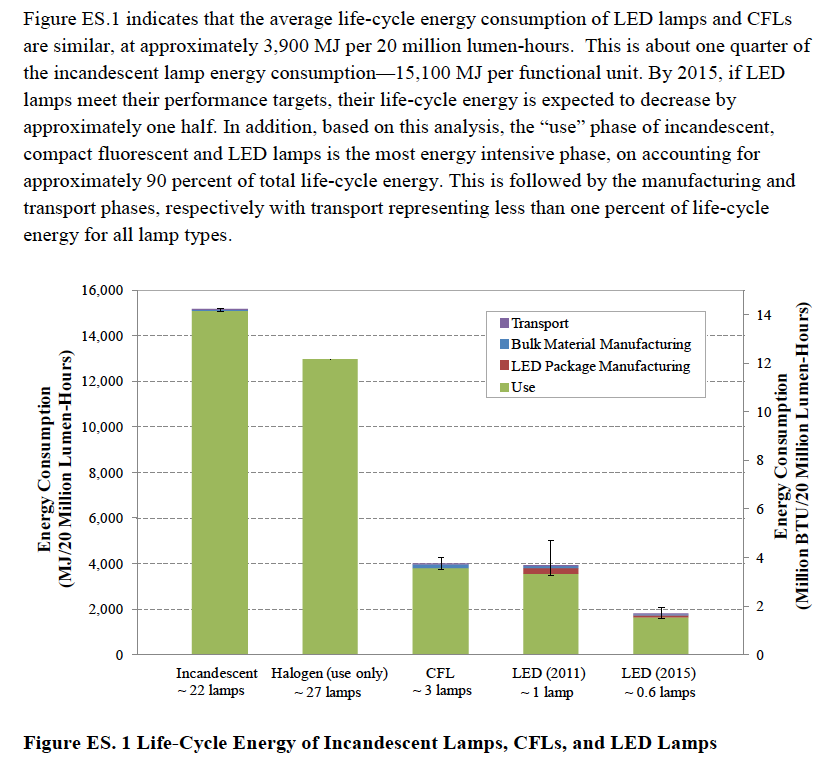 There is a lot of efficiency variation that depends on the quality of the LEDs. Cheap LEDs are no better than CFLs.

High quality LEDs from brands like Cree or Philips can be over double the efficiency of CFLs.

Also under-powering LEDs will make them more efficient and last longer. They can last indefinitely when underpowered by a certain level.

I believe you can also find more detailed info through phys.org (the link throws you in the website with the "incandescent light bulb" tag on).

Regarding "state of the art", I would refer you to NanoLeaf (formerly NanoLight). They just completed a Kickstarter campaign with a lot more money than they asked for, and have reviews in several renowned magazines and websites.

Like any solid state electronic LED's are declining in cost and the materials to make them are largely abundant. LED bulbs are the most energy efficient lights currently on the market. However the incandescent light is still superior in ambient light quality, ALL the materials used in conventional bulbs are recyclable), nontoxic.

Not the answer you're looking for? Browse other questions tagged energy electricity ecological-footprint energy-efficiency light or ask your own question.

15
Should I replace existing inefficient light bulbs?
13
Sustainability of LED production?
12
How much energy does it take to create a single light bulb?

34
What’s the best strategy for turning off CFLs that will save energy but not reduce lifespan so much
16
Are there any bright candelabra base LED bulbs equivalent to a 60-75 Watt incandescent?
12
How much energy does it take to create a single light bulb?
9
How do I dispose of Xenon light bulbs?
2
How much heat loss occurs due to unsealed downlights?
7
What are the incentives for energy companies promoting energy efficiency?
3
How much electric energy would a studio apartment use per month if everything inside is powered by electricity (heater, water, stove, etc.)
5
Why are my LED light bulbs so short lived?
1
How does the cost of wastewater treatment scale?