How much land would be covered by the plants that turned into the fossil fuels humanity has burned?

Many climate deniers suggest that humanity is too insignificant to impact the global climate. As a visualization to counter this claim, I thought of the following exercise.

How much coal, oil, and gas humanity has burned in our history?

This part should be straightforward -- I found this chart of global fossil fuel consumption as a starting point: 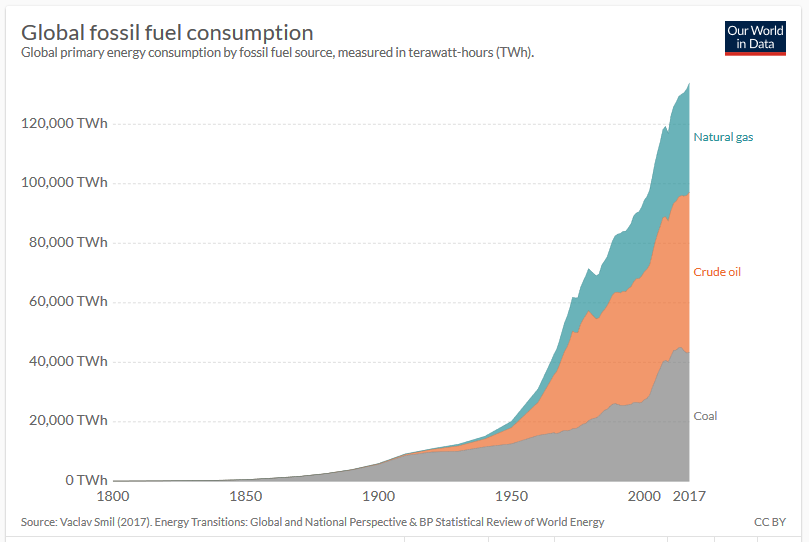 How much plant life does that represent?

Basically, how many trees/bushes/grasses does it take to form a ton of coal or a barrel of oil? At some point in history, the coal, oil, and gas we're digging up were plants in a forest, prairie, or swamp.

This Quora answer suggests that 10 tons of plant matter is required to form 1 kg of fossil fuel, but the link to the source is broken, and I'm not able to find any others.

How much land would all those plants cover?

Once we know how many tons of plant matter went in to all the fossil fuels we've burned, we could figure out how many acres of forest, prairie, or swamp that would equate to. This part probably requires a lot of assumptions (density of various ecosystems, etc.), but that's OK.

I'm imagining that this is going to be a vast quantity of land. At least the size of Africa. Perhaps several continents. Once we've got that number, we can visualize it -- imagine burning down a forest the size of [Africa/Asia/some other recognizable land mass] -- now we can understand how humanity's consumption of fossil fuels might impact the climate.

How coal was formed

Regarding coal, from trees, it's not simply a question of the area whether it was a continent-size landmass, but more of the temporal side of things -- how long a time period the land was covered.

Coal was laid down from plant matter during the Carboniferous period, which lasted 60 million (60,000,000) years. For most of that time the micro-organisms that existed were unable to break down the lignin which made up 70% of the plant matter. Effectively the trees didn't rot, they fell down, and more trees grew on top, then died and fell down and more trees grew on top, for millions of years. The carboniferous period ended when the microorganisms evolved the ability to consume the lignin and the coal laying stopped.

So supposing it takes twenty years for 'a tree' to reach maturity, the carboniferous period is three million generations of trees. 'Tree' is a little inaccurate compared to what we currently think of as a tree. The plants were effectively a really tall moss, and it was 80% 'bark' compared to modern trees that are about 10% bark.

All land on earth

During the carboniferous period most of the land on planet was covered with trees, Africa, Asia, the Americas. But to somehow recreate all the coal, you need at least twenty years for a tree to grow, and because there were three million generations, you need three million times the amount of land available on earth's land masses.

Suppose we drained the oceans to create more land for more trees, then you'd only need one million earth's worth of land.

How many trees, how many earths?

Currently there are around three trillion tress on earth -- it's not unreasonable to think that during the carboniferous period when there was nothing else happening, there would be maybe double that, six trillion trees at any moment. Over a 60,000,000 year period, that would be a total of eighteen quintillion trees (eighteen with eighteen zeros after it).

My point is, to recreate the coal that we've consumed alone, ignoring the oil and gas, it's not a matter of planting a few trees, its more a case of planting quintillions of trees on hundreds of thousands of planets. 18 quintillion trees at a rate of 3 trillion per planet requires 6 million planets.

Even if my sums are a few zeros out, its a mind-boggling number of trees and amount of land.

What about the coal we've already used?

In terms of coal that we have already burnt, the World Coal Association figures estimate that the proven coal reserves left in the ground are enough to last another 150 years at current rates -- this is the coal that is easy to dig up with current mining technology. There might be vast quantities of coal located in inaccessible locations, like the bottom of the sea, or spread out too thinly to be cost-effective to mine. This isn't included in the proven reserves figure.

Looking at the Global Fossil Fuel consumption graph in the question, we could estimate that historic coal usage is about 75 year's worth at current consumption rate. At current usage rates, the sixty million years of laying down coal gave us around 225 years of coal that is economically accessible. We're roughly a third of the way through that.

From the earlier calculations, that's three quintillion trees spread out over only two million earth-sized landmasses.

I don't think this question can have a very definite answer because of the enormous time involved. It takes time for mountains to break up into chemical rich dust, and it is really only on land that has risen out of the sea that things could start to grow at first. There may have been enormous tracts of desert for many eons, with plants gradually spreading and making more soil. Another thing to consider is the animal remains that go to make up the peat, especially where the soil was alluvial. It is really a question of how much life went into the making of coal and oil. Did the weight of life on Earth ever exceed that of today with our teeming human billions? I think it is impossible that it could have, because we are using fossilized life in order to swell our own, and this never happened in the past. So when fossilized fuel runs out there will be a huge drop in the weight of life on Earth. Unless of course we use alternative forms of energy. But this will not really work either because of the imbalance of ecology caused by this huge increase in the weight of human life, with its significant increase of heat.

Where I live, forests reach a density of 100-200 cubic meters of growing stock per hectare. One cubic meter equals one tonne of carbon dioxide.

Perhaps in more temperate regions the forests can reach a higher density. But even then, I'd say we have already used so much fossil fuels that the trees in the forests of the entire world can't contain an equivalent amount of carbon.

As a guide, mature sitka spruce forest in the UK has 500m3 of wood per hectare report;

This wood has a density of 450 kg/m3 density tables, to that makes 225 tonnes of wood per hectare. The wood is about 50% carbon, so that would convert to 110 tonnes of coal per hectare (the carbon content for wood is discussed by Lamlon in Biomass and Energy).

This doesn't necessarily convert to coal -- this answer addresses the question of how much forest would be needed to match the carbon content. The rate of conversion to coal depends on many factors .. and most (perhaps all?) of the coal we are burning was produced in conditions very different from today.

That would be about one third of the area of the Amazon jungle (these numbers come with no guarantee, and the Amazon obviously has a different density to Sitka spruce plantations ... but it is interesting to see how you can arrive at an answer).

I was answering the reason given for the question which was, is man's impact significant? Lets look at it another way. plant and animal remains turn into peat, peat turns into coal and oil. They are called fossil fuels because they represent all the life on Earth almost from the beginning of life until more or less the present day. Some, perhaps as much as half, has been lost by volcanism, the movement of the Earth; so it's current volume is less than 100%. Palaeontologists have become very good at measuring the amount of time each layer of earth, including the layers of coal in mines took to compact. Their measurements tend to be in millions of years. How long has man been using fossil fuels? A little over one hundred years. So we are talking about man releasing all the carbon from all the forests in the world at about the rate of a million years of life on Earth, in one year. The area of forests needed to be sustainable at this rate would be at least ten times larger than the sun. I'm sorry if my figures are slightly inaccurate but it is difficult to be accurate when dealing with such astronomical measurements.

Not the answer you're looking for? Browse other questions tagged global-warming fossil-fuels climate-change or ask your own question.

3
Do we have a way to limit rising sea levels in a warmer global climate?
6
If everyone had an 'American carbon footprint', how much would the world's temperatures increase?
5
Is an incrementalist approach to decarbonisation feasible?