What would happen to greenhouse gas emissions if no more humans were born?

While discussing global warming and climate change, I have often seen people say that overpopulation is the real problem and that the biggest thing anyone can do is have one fewer child. Some people extend that a bit further and aim to never have children.

How effective would this be at reducing human impact on climate if everyone decided to live this way? Would it be enough to put the brakes on climate change and limit warming to 1.5º C? Or maybe 2.0º C? Assume everyone alive maintains the same behaviour and standard of living.

I'm not a demographer, but I attempted a first order approximation based on what I could find. World-O-Meter has a page with world age structure grouped into buckets of 5 years (eg. 20-24). I roughly calculated the total population over the next 100 years by assuming everyone survives until about age 100, so I just zero out one bucket every 5 years. 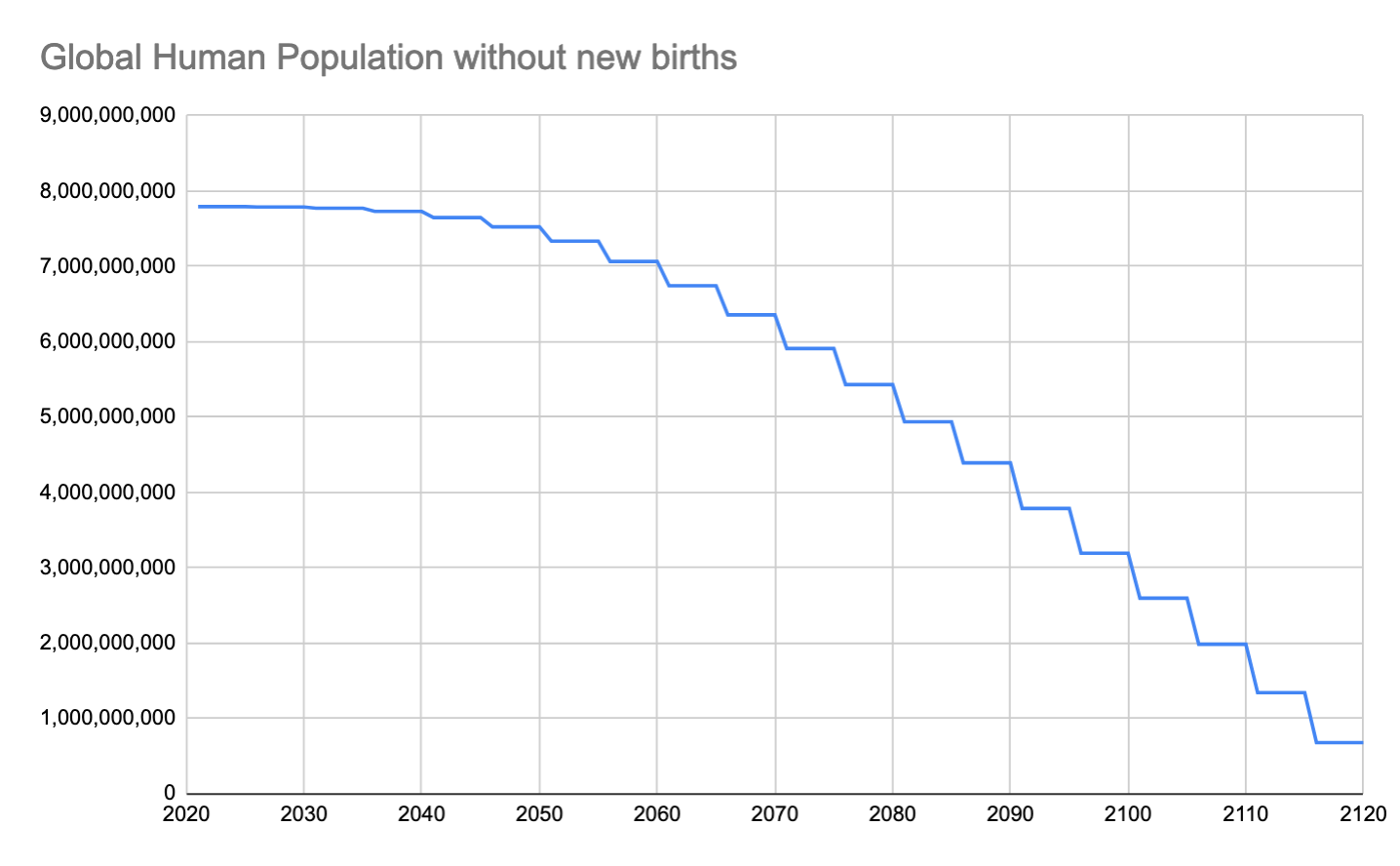 Annual emissions are 35.9 Gt CO2, so divided evenly among 7.7 billion people that would be 4.7 tonnes CO2e per person, per year. Assigning those and adding them up gives a total emissions curve like this. 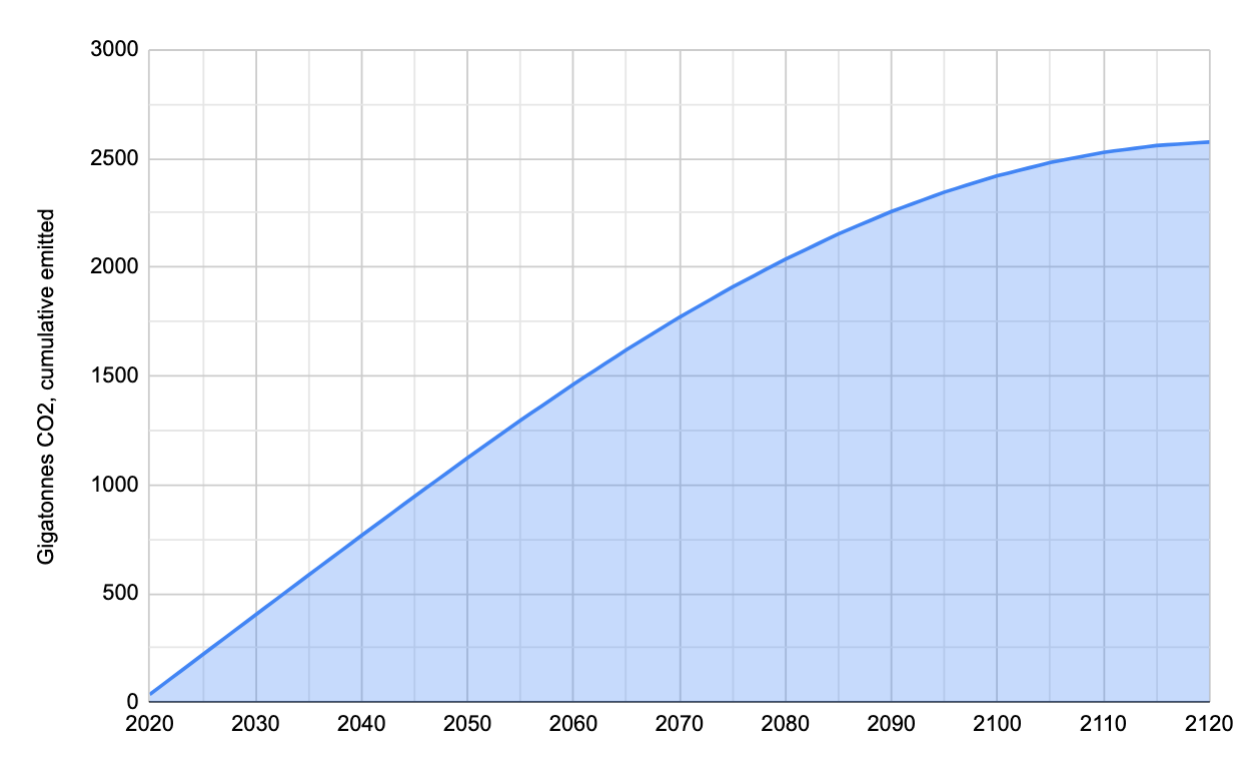 The estimated carbon budget to stay below 2º C is somewhere between 565 Gt CO2 and 1550 Gt CO2. In a no-birth scenario with everything else held steady, we would cross that threshold around 2035 or 2063, respectively.

Even if everyone in the world stopped having children entirely, we would still cruise past the targets to limit global warming to 1.5º or 2.0º. A control on population growth would not, on its own, be a sufficient emissions control measure.

Of course, there is plenty of ways to refine this estimate. More granular age buckets could be used. Populations and emissions factors for different countries could be incorporated. Mortality rates for all age groups could be accounted for. But I'm not a demographer, so I haven't done that.

Well if everyone stopped having children the Earth would return to "normal" pretty quickly. But we don't want quite this much of a reaction, we just want to stop the population increasing any further, for our own sakes, as much as for the purpose of avoiding Armageddon. I realise that this overcrowding of the human population is not very obvious in some places, so I will speak of the global impact. There is two much free carbon dioxide in the air and increasingly less free oxygen. Now apart from all industry even the population itself is largely responsible for this because we now number more animal weight on land, than the planet has ever had on it before. And we all breathe out carbon dioxide. Therefore it should be obvious that a little reduction in the human population is necessary, and it is achievable simply by taking the simple step of not having more than two children.

The CO2 we breathe out comes from our food. Exactly, and we eat richer food than any other animals, with a higher calorific value. Moreover our brains use more calories than those of other animals. I am going to avoid figures but I seem to remember that the sugar our brains use is a surprisingly high proportion of our total sugar intake. Also bear in mind that this is mostly refined sugar, and no other animals eat refined sugar or indeed anything like as much as we do. So, it isn't exactly a closed loop. There is a lot of unnatural chemistry in the mix, and some of it is inorganic. In other words it is likely that humans are freeing CO2 into the air at a higher rate than would happen in nature. I totally agree about deforestation, and would also point out that rotting things release CO2 and mankind is responsible for a much higher rate of rotting vegetation than would ever happen naturally. It is our large brain which sets us apart from nature, and from the natural cycles of the planet, because it has enabled us to alter the natural cycles of all materials in a way which the Earth can no longer sustain.

Not the answer you're looking for? Browse other questions tagged greenhouse-gas-emissions global-warming population degrowth or ask your own question.