I've heard a lot of people push for natural gas as a fuel for generating electrical power. However, oil is said to be a very dirty fuel. Aren't oil and natural gas harvested from the same sources? The cost of each can of course vary, but to what extent will total oil production and total gas production be linked in the future? If countries take measures to make oil more expensive and natural gas cheaper, won't they cancel out?

Bonus question (if applicable): Is there any company that only produces natural gas, not oil?

This answer looks mainly at oil and gas production in the US (since that's what I'm more familiar with, and the U.S. leads global petroleum and natural gas production as of 2018).

The EIA provides data on production rate of oil and natural gas wells. The report explains how wells are classified as either a "gas well" or an "oil well":

6000 cf of natural gas and 1 b of oil have roughly the same energy content -- about 1800 kWh. The FAQ in the report explains a bit more about how these wells are classified:

In this report, we sometimes classify a well as a natural gas well in one year and as an oil well in another year, and vice versa, depending on a well’s gas-oil ratio. We used this approach because the respective volumes of liquid and natural gas produced by a well can change significantly during its production history.

I downloaded the data and converted the numbers to terawatt-hours (TWh) to make it easier to compare: 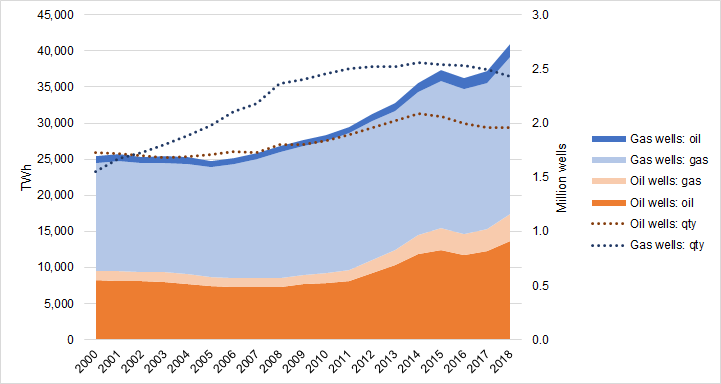 Three important things stand out from this chart:

This last point essentially means that gas wells are "better" at doing their main job, than oil wells are.

Most "new" natural gas is coming from shale gas wells

Data on production of natural gas in the US from various sources is available here from the Energy Information Agency.

I downloaded the data and put together this chart showing total historical withdrawals of natural gas, along with what is vented and flared*: 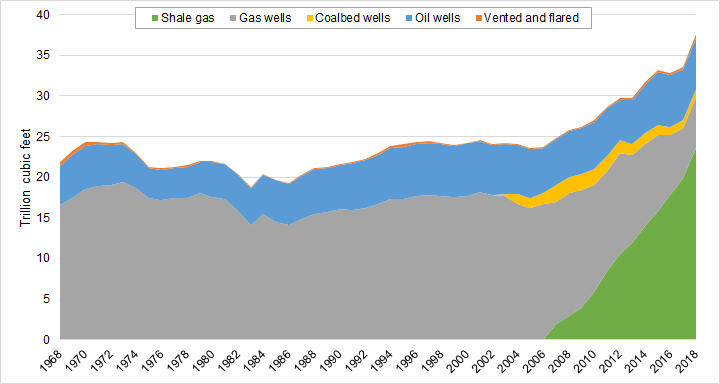 Modern shale gas wells (using hydraulic fracturing, or "fracking" methods) produce a higher proportion of gas compared to traditional methods. Growth in this area is massive over the last two decades, meaning the ratio of oil:gas production is falling.

However, this growth in natural gas tends to replace coal production, while total oil production continues to increase 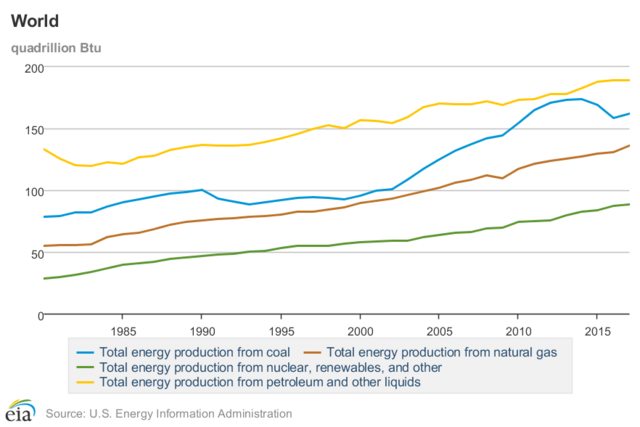 What is venting and flaring, and why is it done?

In areas where natural gas is produced at oil wells but is not economical to transport for sale or contains high concentrations of hydrogen sulfide (a toxic gas), it is burned (flared) at well sites. Natural gas flaring produces CO2, carbon monoxide, sulfur dioxide, nitrogen oxides, and many other compounds, depending on the chemical composition of the natural gas and on how well the natural gas burns in the flare. However, flaring is safer than releasing natural gas into the air and results in lower overall greenhouse gas emissions because CO2 is not as strong a greenhouse gas as methane.

Over time, as natural gas has become a more important fuel, the quantities which are vented and flared have diminished, even as total production increases (source): 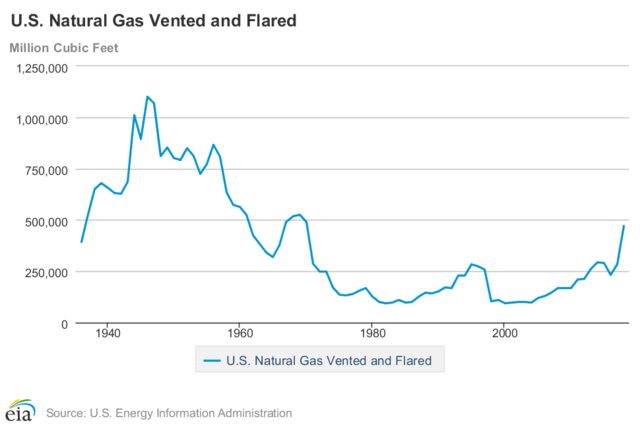 They are inherently linked. Every oil well produces some gas. A few gas wells produce only methane and ethane but a majority also produce some propane, butane, and heavier hydrocarbons. It depends on whose definition you are using as to when LPG ( liquid petroleum gas) becomes an oil component. And oil wells normally produce more gas and less oil as they age and are eventually plugged. Another way to look at it as both are hydrocarbons and the temperature determines if the hydrocarbon is in a gas phase or liquid phase.... Bonus answer : There is no production/drilling company that produces only gas or oil. The closest may be coal bed methane but any company that I know that produces this gas also has other types of wells. Bonus answer to question not asked : Nearly every well is drilled in hope of finding mostly oil as it is more valuable. To the extent that a well that produces nearly all gas may be plugged and not produced and considered a failure ( depending on several factors such as location.).

Geologically and by origin, yes, they are linked. Politically they've started to split. Its use is much less detrimental environmentally than oil or coal - it burns clean and is nontoxic. And it was termed an important “transition fuel” by President Obama as part of his administration’s clean energy goals. Gas companies glommed onto to that by marketing it as a “green” fuel, and in public campaigns seemed to distance themselves from oil, despite often having stakes in both markets. The discovery of shale gas has been the most important catalyst in bringing natural gas back strongly the US energy mix from its height in the 1990’s. The development of transportable Liquid Nitrogen Gas (LNG) has enabled it to be an export product. Likewise, many cities are reinvesting heavily in gas distribution infrastructure, swapping out entire systems of iron pipes to new plastic materials.

Not the answer you're looking for? Browse other questions tagged oil natural-gas or ask your own question.

11
How is Natural Gas more sustainable as fuel than Gasoline?

11
How is Natural Gas more sustainable as fuel than Gasoline?
6
Water heater vs stovetop: most efficient way to heat water using natural gas?
4
Will natural gas or propane generators also run off of methane?
3
Life cycle analysis comparing natural gas and propane prior to combustion?
2
How much does the methane content of natural gas vary, and what is the impact?
2
Which countries, regions, or cities have banned natural gas in new construction?
4
Propane vs. natural gas stove - indoor air quality?